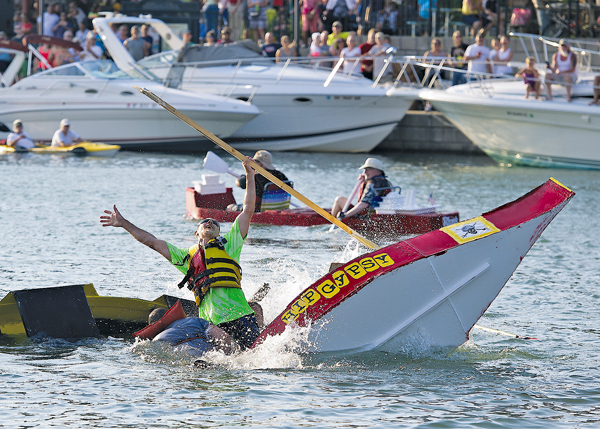 Shown is a scene from last year's Canal Fest.

Volunteers from local organizations are gearing up to celebrate the 34th annual Canal Fest of the Tonawandas. The eight-day event is set to take place from Sunday, July 17, to Sunday, July 24, along the Erie Canal waterfront in North Tonawanda and the City of Tonawanda. Peter Chenier Jr. has taken over as president of the event's committee after his predecessor Larry Denef decided to pass the baton after 15 years.

Bands will also perform on the Gateway Park waterfront each night of the event.

The overall goal of Canal Fest also remains the same, which Chenier said is to help support and promote area nonprofit organizations.

Chenier said, other than the event's corporate sponsors, "each booth is a nonprofit. There's probably 50 nonprofit organizations that ... participate in Canal Fest," Chenier said.

One of the organizations that benefits from the event is Sweeney Hose No. 7, where Chenier serves as a volunteer fireman. Company volunteers will be manning the beer tent throughout the event and all proceeds will go directly to the organization.

Denef, who still helps organize Canal Fest, said, "Not only does it bring more people to the Tonawandas for the eight days than they normally get for the whole year, it's a way for the nonprofit organizations in the Tonawandas and near surrounding areas to earn money to stay alive, basically."

Overall, Chenier said "we want it to be a family-fun environment and make it affordable."

Both admission and parking are free for the event.

"You really don't have to spend any money if you don't want to," Denef said.

Chenier said, "It's free to come in. So even if they were to come down to the event for the parade, the car cruise, or a motorcycle cruise ... it doesn't cost them anything to come down and go to those particular events."

For a complete schedule of activities, visit www.canalfest.org.