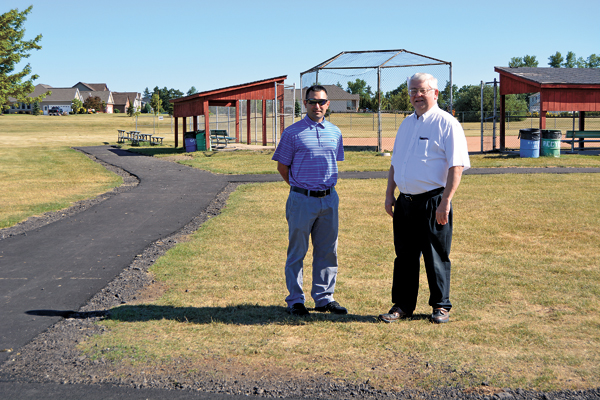 Town of Wheatfield Recreation Director Mike Ranalli (left) stands with Supervisor Robert B. Cliffe beside a new path leading to one of Fairmount Park's ball fields.

The Town of Wheatfield's Fairmount Park now features over 6,000 feet of new, handicapped-accessible pathways as part of the Fairmount Improvements Project, which broke ground last fall.

Before the pathway was laid down by NFP & Sons, visitors had no choice but to walk across the grass, which limits access for those with certain disabilities.

"It's always been that, if it was wet out here, you can't make a walker go," Cliffe said.

The original plan for the pathways involved the installation of a 1-mile route around the outskirts of the park in two phases. However, after reviewing the numbers and design, Cliffe said it was decided to have a half-mile path around the pond area of the park as well as additional pathways branching out from it to the park's main pavilions and its five ball fields.

New handicap parking is now easily accessible from the path, as well.

"There is a path that allows a handicapped person to be able to park in a handicap spot and get to that ball field and get to that pavilion so that everybody can use the park," Cliffe said while pointing out some of the sites along the path. "That's the object is that everybody, no matter what condition you are in, you have the opportunity of using the park."

Although the path still needs some finishing touches, including new topsoil and grass seeding around its edges to be added in the fall, Ranalli said it is already being put to good use.

"I'm just amazed how many people use it already," he said. "I've seen mothers with strollers; I've seen seniors on bikes; I've seen roller blades out here. ... I have coaches that come out here that, just after the games, they take a walk with their teams. Even before the blacktop was down and it was just the stone, people were out here riding bikes and walking all hours of the day."

Cliffe said the paths were "modified after the fact to make it more usable. A man comes out here just about every day on a tricycle. He's an older gentleman and he goes around the path several times - safely, he's not out on the roads."

Indeed, Ranalli said the new pathway offers residents "a safe place to walk. I mean, I don't even like walking around my neighborhood, because it's just dangerous being out on the road. There's a lot of people not paying attention when they drive. So this is just a safe place to come. They can watch their kids play ball, and they can go fishing ... and they can exercise."

The second part of the improvements project is the addition of a new bathroom facility, which is a work still in progress. The site work was done by NFP & Sons and the general structure has been built. Electrical work was completed by K & W Electric. However, plumbing is still being completed by Huron Plumbing & Heating.

Cliffe described the new bathroom project as a "handicapped-accessible, up-to-date, modern facility." He added, "All the fixtures are stainless steel, cutting down on cleaning, cutting down on painting - as maintenance-free as possible."

Construction of the bathroom, pathways and other improvements kicked off after the town obtained a grant from the New York State Office of Parks, Recreation and Historic Preservation through the U.S. Environmental Protection Fund.

The grant includes the state reimbursing 50 percent of what the town pays toward the project, up to $700,000. Therefore, the maximum amount reimbursed would be $350,000.

"One of the things that was in the original plan dating back before my time (as supervisor), were exercise stations for seniors, handicapped individuals," Cliffe said.

As visitors travel around the path, they could stop and use the outdoor equipment along the way.

"So far, the board has not approved that," Cliffe said. "(The equipment/stations) tend to be quite expensive. But that could still happen."

The board still has at least a year to make this decision, and could re-file the necessary paperwork to prolong the grant for even more time to consider further additions, Ranalli said.