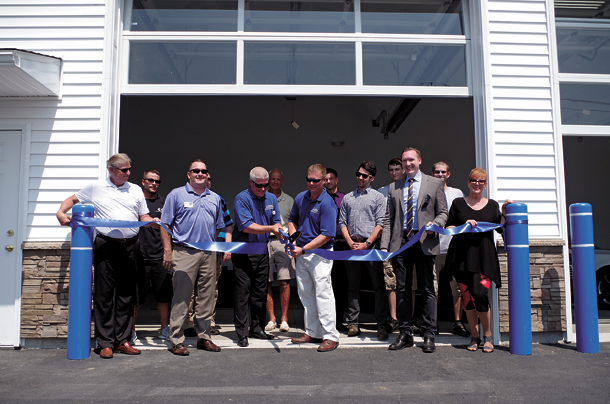 Chris Taylor, left, and Travis Smith, owners of Certified Autobrokers at 1693 Grand Island Blvd. cut the ceremonial ribbon on a new 2,200-foot building and an 8,000-square-foot parking lot at an event held July 6. They were joined in the ribbon-cutting by employees, members of the Grand Island Chamber of Commerce, and representatives of town government. (Photos by Larry Austin)

Certified Autobrokers praised for improving 'face of the Island'

The business community's latest ribbon-cutting event shined a light on a young Island enterprise that leaders say is paving the way for a more appealing commercial district.

Certified Autobrokers at 1693 Grand Island Blvd. held a ribbon-cutting and open house on a new 2,200-foot building and an 8,000-square-foot parking lot at an event held July 6. Owners Travis Smith, Chris Taylor, friends, families and employees were joined by the leadership of Island business and government in celebrating six years of company success.

During the ribbon-cutting, Taylor called the expansion "really just a big garage used for detailing and taking photos," but added, "For us it was much more than that." The expansion represented the blood, sweat and tears of the team at the dealership, its business partners, customers, family friends and wives. In total, said Taylor, the group has "taken this property and a little, teeny car lot to what it is today, and we are very proud."

Taylor said the ribbon-cutting "signifies the completion of years of hard work and planning."

He took a minute in the ribbon-cutting celebration to look back and see how far the company had come and noted the support the company has received from customers, residents and said the town "has been amazing throughout our entire six year existence." 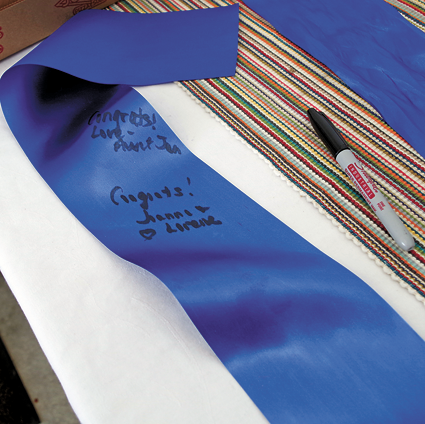 Town Supervisor Nathan McMurray, who attended the ribbon-cutting with council members Bev Kinney and Ray Billica, praised Taylor and Smith for living what he called the American Dream on Grand Island Boulevard. He noted the company has grown from three cars in front of the motel next door to more than 100 cars in an expanded lot, while adding eight people to their workforce. He added the company's philosophy of selling cars is not the old school way of buying a car.

"You come in, you know what you're getting, it's very transparent," McMurray said of car-buying at Certified Autobrokers.

Eric Fiebelkorn, president of the Grand Island Chamber of Commerce, echoed the sentiment.

"A lot of people just cringe at the thought of buying a car," Fiebelkorn said. "There's a lot of pressure in the industry to do well by the dealerships. They have a lot of money out, so I think it sometimes translates to how the car sales industry goes to market, and these guys, I think, they're doing it the way people want to be treated. And I think it's going to yield great results to them."

"It's great to see a local doing well, taking care of the local community," Fiebelkorn said of the celebration. "They're investing and expanding here. This isn't free money. This is a leap of faith by them in the community and Grand Island itself."

The car-buying philosophy has paid dividends, he explained.

"They're taking that risk because they've gotten good response from the Grand Island community and the neighboring towns," Fiebelkorn said. "I think it's because they do a really high integrity, different approach to this kind of business."

An added benefit of the company's expansion is the improvement of the appearance of the south end of the boulevard, within sight of the roundabout at the intersection with Staley Road.

"It's a big step up," Fiebelkorn said of the area from the roundabout to Certified Autobrokers lot. "If you would have asked anybody 7 years ago, it felt like a truck stop entrance to the Island."

The town and chamber can do only so much in changing the curb appeal of properties, Fiebelkorn said, and he gave a pat on the back to the company for taking the lead in the property improvement initiative in the south end, a section of the Island that others have complained about because of some run-down parcels.

"The business community is the one that takes care of a lot of these problems by running successful businesses," Fiebelkorn said. "The responsible owners who do good business, just by the nature of being here and improving their properties, improve the face of the Island."

The quality of Grand Island Boulevard, what Fiebelkorn called Grand Island's "7 miles of Main Street" is a point of emphasis now in government and in the chamber.

"It's really challenging to have everything look pristine and great. The No. 1 way that'll happen is to get quality businesses with owners who are engaged in the community and take pride in their establishments, and they'll do what these guys are doing, which is beautify it for us," Fiebelkorn said.

Taylor has invited all Islanders, not just customers, to see the expanded facility for themselves in July in what is a monthlong open house of sorts.

For each car sold in July, the business will donate $100 to the DeGlopper Memorial Expansion Committee, which is raising money for a major improvement on the boulevard at another major intersection, that with Baseline Road.

"It's not a sale, we want to say 'Thank you' to Grand Island," Taylor said. "And we thought a supercool way of doing that was trying to donate a significant amount of money to the memorial. I think that's an awesome project," Taylor said.

The Taylor family is full of veterans, such as Chris and his father. Taylor's uncle, Philip C. Taylor, was killed in Vietnam and his name is engraved on the stone that lists the honor roll of Islanders killed in action.

"It's special to us," Taylor said to the DeGlopper Memorial expansion.