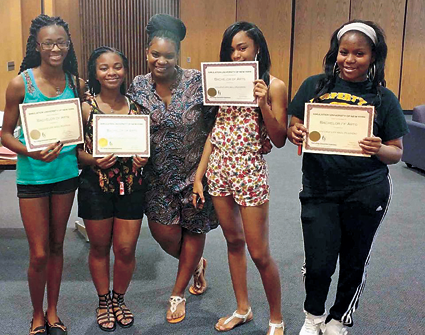 Shown is April Baskin, College Simulation Experience founder and executive director, center, as she stands alongside high school students who earned their fictional degrees after completing the challenges of the program.

All across Western New York, high school graduates can learn to succeed in college in a new way through the College Simulation Experience.

Volunteer staff and educators travel to different sites throughout Western New York, including schools and community centers, to "set up a fictional college
campus." Through the process, students "tangibly experience" the challenges that come with college life, said April Baskin, the program's founder and executive director.

"They're getting the experience first-hand as to what goes on outside of just getting into college. It's so much more than just getting in. ... You have to graduate. And a lot of people don't graduate, because they just can't handle managing their life. They're new to it. They're so new to that experience."

During each session, students assume false identities and are required to complete a series of tasks associated with being successful and independent in college. Some of these tasks include taking tests, attending class, buying groceries and doing laundry.

The one-stop program requires students to go through a variety of activities to get a feel for what it is like to prioritize them during college.

For the multiple-week programs, tasks are completed on different occasions, then analyzed, dissected and discussed in-depth.

Baskin described the seminar as the big "shabam," because it will incorporate everything the program has to offer in one full day.

"It's a two-hour simulation. It's breakout sessions. It's guest celebrity artists. It's community leaders coming to speak. It's everything we offer all at one time," she said.

Featured will be a college life simulation game, panel discussions, an information fair, sports challenge, giveaway prizes (including a donated autographed Buffalo Sabres puck) and food. DJ Hassan will be there to play music throughout the day. Master of ceremonies will be Tiandra Griffin of Niagara Falls, who just won a DJ spot contest and will be a featured radio DJ on WBLK 93.7-FM.

Representatives from Western New York schools, fraternities, sororities and other college-related organizations will be on hand to answer questions and provide further information.

"Sometimes we send kids to college fairs ... and the kids are not equipped with what questions to ask," Baskin said. "But, after the simulation, they'll know."

Baskin said she is very thankful for Scott's support in expanding the program to Niagara Falls for the first time.

Scott said, when Baskin proposed bringing the program's resources to the city, "I really appreciated and valued everything about this program that she mentioned to me. So, immediately, I told her that I want to be a part and to let's move forward with making this a reality.

"The reason that I felt this was so important to bring to Niagara Falls would be in the statistics of the city. Only 16 percent of the population 25 years and up have a bachelor's degree or higher. That is the result of low retention rates and many times students being the first generation of college students in their immediate family, like I was. I had no clue (of) what to expect and was quite intimidated of the thought of going to college. I was very fortunate to have a support system in my mother and father."

He added, "I understand not every one of (the) youth in this city has a mother or father that's as involved in their education or that understands what is ahead of young students as they become the first in their family to pursue a higher education."

Of the College Simulation Experience staff members, Baskin said, "All of us, at one point in our lives, struggled through college."

Both Baskin and program director Nina Schultz have gone through the experience of dropping out of school.

"The reasons why we dropped out of school were non-academic, or non-tuition based reasons."

Baskin said students often drop out of school for other reasons besides inadequate finances, such as experiencing too much stress, dealing with a lack of family support or making poor decisions.

"The state that our society is in right now, morals and boundaries have been so blurred, and we really need to create an intentional awareness about life choices, decisions and consequences," Baskin said. She added, "The event is happening because Niagara Falls has decided that they want this to be a keystone element with their youth."

Scott said, "Unfortunately, there are many other outlets that are glorified rather than going to college and pursuing a higher education. I am hoping that this experience shows the realities of college so these students are not unprepared for what they will face. But I want the youth and students to also learn just how beneficial and vital achieving a higher education will be to their future success."

Donations for the  "The College Seminar Experience" have been provided by residents, elected officials, schools and local businesses to help fund the program, which costs $8,000 to put on.

Of the funds raised, a $2,000 scholarship will be given to one high school senior who has been accepted into college. The remainder of that money will be used toward expenses such as bringing in public speakers and providing food and information kits.

So far, over $3,000 has been raised, and Baskin is confident their total goal will be reached. If the full $8,000 is raised, all participating students will be able to attend for free.

In the meantime, students are faced with a $100 fee to participate. In response, local officials and organizations, including Niagara University, Assemblyman John Ceretto and former Niagara Falls City Court Judge Angelo Morinello, have sponsored students.

To sponsor a student or register for the event, visit www.collegesimulation.com or visit the Niagara Falls Public Library at 6 p.m. Wednesday, July 13, the event's final registration day, to fill out the required forms in person. Parents will be required to sign a release form. Refreshments will be served.