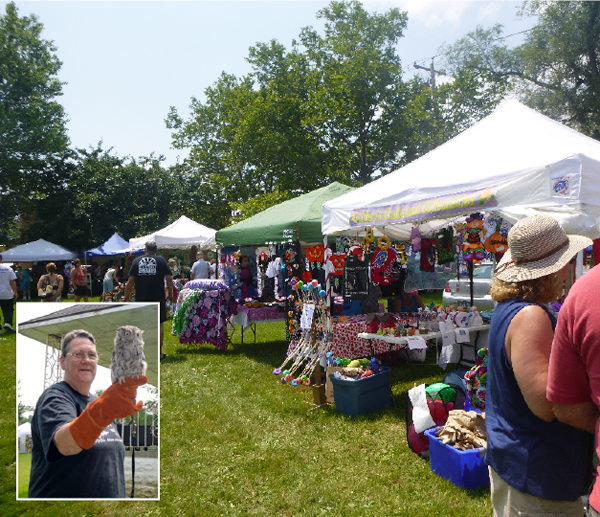 After nearly eight months of planning, the Rotary Club of Niagara County Central is completing final preparations for its 26th annual Olde Sanborn Days Arts and Craft Show. The event will take place from 10 a.m. to 5 p.m. Saturday, July 9, and from 11 a.m. until 4 p.m. Sunday, July 10 at the Sanborn Fire Co. grounds, 5811 Buffalo St. (Route 429).

The weekend will feature family-oriented activities including a craft show with approximately 70 vendors, local music and live entertainment, a petting zoo and children's games. Custom and vintage automobiles will be on display from 11 a.m. to 4 p.m. Sunday. Food and beverages will be available for purchase throughout the event, and proceeds will benefit the club's scholarship and contribution fund. In addition, the Sanborn Fire Co. will hold a chowder sale.

As the Rotary Club of Niagara County-Central's biggest event of the year, Olde Sanborn Days typically attracts around 5,000 people.

Rotarian Pat Sullivan, who organizes the event, said, "It takes everybody to do it - all the club members. We start Friday night and we work through till Sunday night."

About a month after the event occurs each year, the roughly 16 club members follow up with crafters and help sign them up for the next year.

This year's event will begin with opening ceremonies at 11 a.m. Saturday. Local dignitaries and elected officials, including state Sen. Robert G. Ortt, will speak around 11 a.m. Bill Ross, former chairman of the Niagara County Legislature, will be the master of ceremonies. Members of the Niagara Falls Air Reserve Station will serve as the color guard, and Brett Jackson, a recent graduate of Starpoint High School who received a $1,000 scholarship from the Rotary Club, will sing the national anthem.

After the opening ceremonies, a new Law Enforcement Appreciation Day (Saturday, July 9) tradition will be presented.

"The Niagara County sheriff will be there, the New York State Troopers, the City of Niagara Falls, Town of Lewiston and others," Sullivan said. "They'll be honored at the opening ceremony to try to promote the respect of the police and law enforcement, the first responders."

"Like anything else, community involvement is huge," Harmon said.

He added, "Getting some kind of dialogue going with the community is very important."

"Their respect for us and our respect for them has to go hand in hand and, by doing ceremonies like this and participating in community events, I think it helps both sides."

"The basis is to bring (law enforcement personnel) back up into the respectfulness that they need," Sullivan said.

Harmon said he created the program so that troopers could become more actively involved in schools, youth groups, businesses, religious groups, commerce and agricultural groups, and even other emergency response organizations.

"When I was growing up, I remember seeing troopers and whatnot at these things,' he said. "Unfortunately, due to manpower and budgetary restraints, and the fact that they moved troopers out of this area and to other areas, we've kind of gotten out of it, and we just want to get back into it."

So far, the group is just beginning to reach out to groups in Niagara County. Harmon said he hopes it will expand to Orleans County and Genesee County and eventually across the entire state.

Besides local law enforcement officers, several other local establishments will be on hand to answer questions and contribute to the event.

Members of the Wheatfield and Sanborn business associations will provide information and also sell beverages at the food line. The Sanborn Historical Society will set up some of its antiques for visitors to learn about and explore.

He added, "It's economical. ... It's the working off all these groups together to create a family fair that people want to come to."

Another local establishment that has contributed to the event is the Lewiston Council on the Arts. The LCA is cosponsoring the weekend residency of returning artist Aya Blaine, member of Chainsaw Chix, an international team of female performance sculptors.

Eventgoers can watch Blaine in action on both days as she takes a 3-foot log and turns it into a work of art using a chainsaw.

Blaine will attend Olde Sanborn Days for her third time. "She's been around the world carving (and) she does a great job," Sullivan said.

A 12-year chainsaw carver, Blaine said, on average, she completes three carvings a day during events. Each session takes her about 45 minutes to one hour. Specific requests from buyers, however, can extend the process.

"I started chainsaw carving in Japan," Blaine said. "I grew up in a big city, so I never touched a chainsaw before. But, (later, when) moving to the countryside, I had to cut the trees. So, I had a chainsaw, but had no idea how to use it. So I Googled the chainsaw, then chainsaw carving came up. And I just decided to start."

Over her career, Blaine has taken part in competitions and performed her art across the globe in countries including Canada, Germany, Japan and the U.S.

The sculptures she creates during the live carving sessions at Olde Sanborn Days will be available for purchase. Blaine is also bringing some of her pre-made inventory to sell, as well.

Based on her past experiences at Olde Sanborn Days, Blaine said, "The staff is so friendly; everyone is helpful."

She said she enjoys witnessing "the community art and music in the small town."

Along with experiencing local entertainment, food and crafts, Sullivan said Olde Sanborn Days offers a "nice, comfortable, clean afternoon - no problems, no hassle. People can just walk around and enjoy themselves in the fine weather that we hope to have."

For more information on what Olde Sanborn Days has to offer, call the Rotary Club of Niagara County-Central at 716-693-1949.