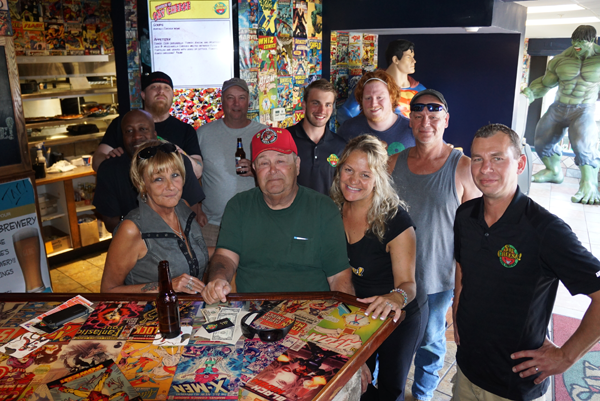 Finally, a candidate we can all support!

No candidate in the 2016 political season has dominated the election cycle like Grand Islander Butch Backlund.

Last week, Backlund was elected mayor of Say Cheese, the popular bar, restaurant and pizzeria on Love Road, where a party followed the voting. Note to Grand Island town government: There are no term limits at Say Cheese. Backlund estimates he's been mayor about 10 years.

"I've been here since it opened," Backlund said of Say Cheese, owned by Kevin Slachciak. "That's why he calls me the mayor."

Backlund's "political" career began in the early days of Say Cheese Pizza Co., when Slachciak opened and asked how to improve business and make the bar great again. Backlund recommended Say Cheese run a Happy Hour from 2 to 6 p.m. every day that would drum up business from him and his friends.

"I says, 'You do that, and I'll have them all back here in less than three days,'" Backlund recalled.

Slachciak did just that and the rest is history.

"They came in here and just packed it. They packed it and it's been packed ever since," Backlund said.

Say Cheese has been so busy that Slachciak has expanded the bar a couple times, and has even given Backlund his own reserved mayoral seat at the bar closest to the door. The seat even has Backlund's name on it.

Art Trzaska, the Say Cheese manager and chief election inspector, said Say Cheese now throws an election and party every year with one campaign issue. "You've got to vote for Butch," Trzaska said.

No one is saying the election is rigged or anything, but a campaign sign behind the bar promises a vote for Backlund will get the electorate free chicken wings and reduced price beer, but if you vote for the other guy, "You can hit the bricks."

Trzaska described a candidate who puts the time in campaigning. "He's always there, bright and early," Trzaska said.

There is no mudslinging from the Backlund campaign. Karianne, who Backlund called the No. 1 barmaid on days, said, "He's the best. He watches out for all of us. He keeps the place going. Positive vibes!"

Like a true candidate who loves his country, Backlund said he likes everything about Say Cheese.

"Everything about this place is attractive," Backlund said, noting the bartenders are great and the beer is always cold. "It's a great place."