North Tonawanda's Children's Memorial Garden, also known as the Children's Remembrance Gardenwalk, is finally becoming a reality for parents who have lost children.

After approximately a year of planning, the project's committee members, made up of parents who have lost children, and elected officials joined together last Friday at the memorial's future site in Brauer Park for a groundbreaking ceremony.

The memorial will serve as a place for parents to reflect and remember their children.

"May this beautiful garden symbolize a family's love, a friend's loss and a community's compassion," said MaryBeth Kupiec, co-chair of the memorial garden committee. "We hope this garden will provide a place of healing, support and hope for family members and friends who've experienced the death of a child of any age."

"On behalf of the committee, thank you Mayor Pappas for allowing our input, for seeing our vision, and providing a fitting tribute in this enduring memorial for the children loved and lost," said Paula Benedyczak, the other co-chair of the memorial garden committee. 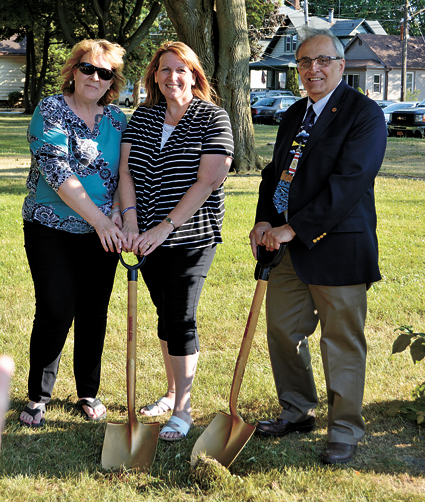 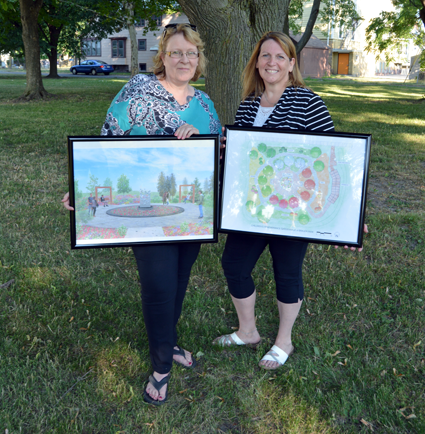 The memorial will feature a pergula, which visitors will pass through to enter the garden walk area.

Inside the walkway, the plan is to create an enclave by carving out some of the land, allowing the space to sit below ground level.

Community members will be able to purchase plaques along the inside walls of the garden walk area in honor of their children.

Swings and benches will be available among foliage that will bloom during the different seasons of the year.

One section of the garden walk will bloom during the spring, and another during the summer, fall and winter.

"The space here ... it's very pretty, very beautiful," Pappas said. "It wasn't really being used for much. But now it can be used as a place of contemplation, a place to sit and think and be at peace. And there's parking; they'll be a walkway. So there's a lot to look forward to."

The cost of the project is currently estimated around $100,000. So far, the project has received $50,000 in state funds allocated by the office of state Sen. Robert G. Ortt.

"I would like to thank the mayor for really coming up with this idea," Ortt said.

"When he came to me - a few months after he was in office - this was an idea that he had for a memorial, and I think that shows you what kind of person we have as our mayor - the (kind of) heart that Art has that this was one of his first ideas."

Pappas and his wife, Linda, held careers in education and they knew of two young students who were killed in a tragic accident years ago. The two of them sought to find a way to remember lost children and, coincidentally ("or maybe not so coincidentally" Pappas said to the crowd), multiple parents in the community came to him, asking if there was something they could do in the city that could serve as a memorial to their children who have passed.

That's when he decided to reach out to the community and really pursue the project.

Pappas said the groundbreaking was "a very special event not only for those who may have lost someone, but it's also a special event for all of us in the city."

Also in attendance were members of the Rotary Club of the Tonawandas. After 99 years of helping the community through volunteer work and donations, the club will cease to exist at the end of June.

Therefore, its members decided to donate the club's funds to multiple community projects and organizations, one of them being the children's memorial.

The club's president Bill Miles presented Pappas with a donation of $7,500 to the City of North Tonawanda to go toward costs of the project.

"We wanted to leave one more lasting memory in the Tonawandas," Miles said.

Additional donations for the project have been coming in as well, and not all of them are in the form of money.

"North Tonawanda companies have come forward and donated materials and manpower and it's going to go real quick now, I think," Kupiec said.

Pappas said people have offered to donate their time to help with general labor associated with the project.

In the meantime, City of North Tonawanda Engineer Dale W. Marshall said he is soliciting bids for contractors that can complete specialized work such as electric, storm water drainage, the pouring of concrete, etc.

Marshall said the memorial is expected to begin and "actually get rolling" by the end of the summer.

The project is expected to be completed within a year or so, but both Pappas and Marshall said, in a way, it will always be ongoing.

People can continue to donate different flowers, trees or shrubs and other materials to add to the project.

Overall, Pappas said, "It feels good" to actually break ground and begin a new stage of the project, because "it's something these people really would like to see, and really, I know, appreciate."

He added, "It's just something that, I think, brings the whole community together, because our community is a very giving community, and it's a very caring community. And I think this type of project just unites the people."

"People can come and reflect and remember not only the children that were lost, but the futures that were lost, as well," Ortt said. "And I think it's a great credit to the mayor, it's a great credit to the City Council and to all the folks who have been involved with this committee, (which) I know is made up of parents who have lost children. So, I commend you for taking what is a tragic thing and having the courage to turn it into something positive and something that we can all be very proud of here in North Tonawanda."

Anyone who wishes to donate or contribute to the Children's Memorial Garden can contact the mayor's office at 716-695-8540.