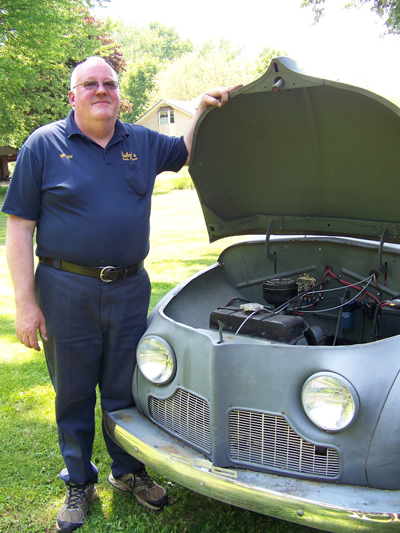 All readers of this column won't remember some of these things from the past, but some of you "youngsters" may enjoy reading what your fathers and grandfathers had in the "old days."

As I ramble on, I know I will awaken some of the seniors' files in the back of their heads, (seniors like me) and some of younger generations. In fact, I'll bet a lot of seniors never heard of this car.

One morning I walked into Weibert's Auto Place in Youngstown to get my car serviced. While talking to service manager Bill Cockayne I noticed "Crosley Quarterly," a magazine produced by the Crosley Automobile Club sitting on the service counter.

I thought man, here is a car I remember riding in from my high school days. It wasn't a new one - I'm guessing it was about a 1949 or maybe a 1950, or '51. It belonged to schoolmate Bob Hochadel who lived in the Town of Niagara. After school a bunch of us guys would get a ride home from Hochadel in his tiny Crosley car. He would drop us off one at a time when we reached our corner. About five of us squeezed into that little car, but remember we were all teenagers and skinnier than we are now. After each guy was dropped off, the car became lighter and the tiny 35 horsepower engine seemed to have more power to the next stop.

Even back then, you wouldn't see too many Crosley cars around. I remember doing some minor engine work on one for a guy when I worked at the Andy Swift Texaco station on Hyde Park Boulevard.

I never saw the guy or the car again, maybe because my work was not too good?

When I saw that Crosley Quarterly magazine I noticed it was addressed to Cockayne. As I thumbed through it, he asked do you like those cars? I replied "yeah," I was reminiscing.

"I own two Crosleys and I am restoring them," said Cockayne.

"No kidding, I would love to see one of those cars again," I responded.

He offered the magazine and I took it. Wow, there was so much in it that I never knew about this car. I then asked if I could come to his house and check the Crosleys out, perhaps take some pictures.

I finally got over to Cockayne's house last Saturday, and there they were. The first one I saw was in his garage; it was a 1949 Model CD Crosley station wagon, completely gutted inside from the roof, the dashboard, and the floor. There was extensive metal work being done on the body outside. The four-cylinder, overhead valve engine was sitting on the floor waiting to be rebuilt.

All the while I was wondering; how is he going to get it all back together and roadworthy again. The floor inside was all rotted out, but the passenger side already had a new floorboard welded in, and the driver's side was cut out ready for the new sheet metal. Most of the windows were taken out, and there were new custom-made rocker panels and other sheet metal parts waiting to be installed.

The side windows of this station wagon were taken out and Cockayne was converting it to a panel truck by putting sheet metal in the rear side windows. He said he was thinking of painting the vehicle to Army color green and putting a large Red Cross on the back panels, just to jazz it up a little. (And to create some eye catching.)

On the shelf in his garage were all kinds of parts, new and used waiting to be installed. A heater was an accessory for a Crosley and there was one sitting there for installation, as was a brand-new factory steering wheel, a generator, and many other parts; I can't remember them all.

I asked Cockayne where in the heck he found all these parts. He replied a lot came from Crosley parts suppliers on the Internet, and also from shopping on eBay.

In fact his other car, a 1947 Model CC Sedan was bought through eBay and Cockayne was extremely happy about the price he paid for it. He told me, and there was a long story to it. I could see he had a lot of savvy in winning it.

The 1947 Model CC sedan was in the backyard, all licensed with a new historical license plate, inspected, and ready to go. There are still some minor things that needed to be done like floor mats, and the upholstery needed some spiffing up, but it is roadworthy.

I noticed the doors were hollow, not like we are used to seeing today, with upholstered panels hiding the window and door handle mechanisms. There were no panels on the Crosley to do that; the windows slide on a track forward and back when you want to open or close them. The inside door handle was just a lever, push down and it opens. When closing the door there is a "tinny" sound to it.

The license plate and tail/backup light is mounted left of center on the trunk. There is only one light back there; that's the way they were made, there were no turn signals back then. On the front fenders were small doors that could open and close from the inside for outside air ventilation. I wish we could have them back, just like the front door side-vent windows like we used to have in the '50s. No need for air conditioners.

These American-made Crosleys began manufacture just before World War II, starting in 1939. They didn't have a hard metal top for roofs, instead it was a convertible type material that you could remove completely when you wanted it off, or put back on.

Two years after introducing the first Crosley in 1939, in 1941 they introduced several different body styles. Included were hard roof sedans, station wagons, convertibles, panel trucks, and a vehicle that was called the Farm-O-Road, introduced in 1950. It looks somewhat similar to an early John Deere utility vehicle, and the front end resembles a Jeep with its cut off, square looking fenders and hood.

In case you wanted to know, according to an advertisement I found from the late 1940s Crosley advertised these cars getting 35 to 50 MPG and you could buy one for as little as $898 factory delivered, including federal tax and handling. The more expensive one priced out at $1,046 inclusive. While WWII was going on, gasoline was rationed and gasoline was an important factor when considering a newer car.

The Crosley Corporation has a lot of history behind it. Crosley Motors remained in business until 1952, with the war suspending production from 1942 to 1946. During that time, they continued making machinery, mostly light engines for the war effort.

Powell Crosley Jr. along with his brother Lewis, were inventors and entrepreneurs, manufacturing many different consumer products like radios, refrigerators, and other appliances. As I remember, in about 1950, they were building television sets. My dad bought a Crosley 10-inch TV, the first in our neighborhood. It was a dinky little thing until we graduated to a big 12-inch TV.

Compare that 10-inch to an iPad screen today.

What I liked while reading about Powell Crosley Jr. was that he was an avid sportsman. He was a hunter and a fisherman. He owned a number of yachts, retreats in Canada, the Caribbean, Indiana, and an island off the coast of South Carolina, also a home in Havana Cuba. He was a well-known saltwater fisherman and participated in tournaments in Sarasota, Florida, where he built a retreat, and at one time was the president of the Sarasota sport fishing club.

Besides yachts, he owned a small number of airplanes; some were seaplanes even though he didn't have a pilot's license.

Powell Crosley once owned the Cincinnati Reds National League baseball team, and the stadium was named Crosley Field in his honor. In 1934 he got into broadcasting, owning his own radio station, and the WLW radio broadcasting corporation in hopes of boosting the sale of radios. In fact I saw a "Crosley" name on a radio/turntable/CD player for sale not too long ago in a Target store.

So the name still lives. Powell Crosley died in 1961.

Comments or suggestions? Email [email protected]. And if you have something you would like to add to this story, let me know. Always remember to take a kid fishing!'