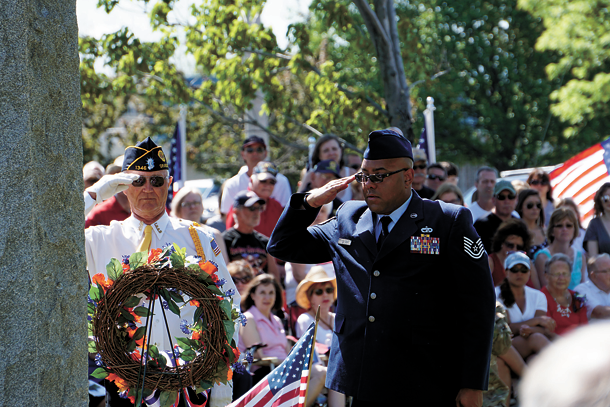 During Memorial Day ceremonies at DeGlopper Park on Monday, hundreds of Islanders who paid their respects during the town's annual event heard the official unveiling of the DeGlopper Memorial expansion plans.

Following a yearlong planning stage, the DeGlopper Memorial Expansion Committee announced plans for expansion and improvements to the park at Baseline Road and Grand Island Boulevard. A fundraising drive is in motion as well.

"We are asking not only for the support of our community members on Grand Island, but all of Western New York," said Lt. Col. Patrick Soos of the expansion committee. "Our intent is to make this a world-class site."

The expanded memorial will honor Medal of Honor recipient Pfc. Charles N. DeGlopper and those Islanders killed in action, but also all Island veterans past, present and future. The site will include a memorial to all branches of the armed forces, and offer a learning experience about those killed in action.

The groundbreaking for the expansion will take place June 9. The footprint of the memorial will expand north to a property that was once a gas station.

"It's going to be spectacular," Soos said of the memorial after the ceremony.

Erik Anderson, resident and head of the expansion committee, said the design presented is the culmination of many hours of labor. The project is spearheaded by the DeGlopper Memorial VFW Post No. 9249, American Legion Post 1346, and Grand Island Moose Lodge No. 180.

"I think this is something the people of Grand Island definitely are going to be proud of," said Anderson, calling a statue of DeGlopper the focal point of the memorial. It will rival in appearance similar memorials at Fort Bragg, home of the 82nd Airborne, and in Normandy.

"So North Carolina will have their DeGlopper area, France will have theirs, and we'll finally have something that we can be proud of for the family and the veterans," Anderson said.

DeGlopper served with the 325th Glider Infantry Regiment of the 82nd Airborne Division of the U.S. Army and was killed in action June 9, 1944, during the D-Day invasion. He received the Congressional Medal of Honor for his actions.

"Nothing is obviously totally set in stone. I'm sure there's some changes that we have to make, but this is the culmination of hundreds of hours of hard work between the board and people that came to the meeting," Anderson said. "It's great that we can do this for the community. This is all about the DeGlopper family, the veterans, and the community."

The bearers of the estimated $750,000 cost of the project are all community-based, Anderson said. There is no tax money going to the project. Information on donating is available at www.facebook/DeGlopperMemorial and www.gofundme.com/DeGlopperMemorial.

"People of Grand Island prove time and time again how much they support the troops, and this park is going to be a culmination of that," Anderson said.