The New York State Office of Parks, Recreation and Historic Preservation and the Beaver Island State Park Memorial Tree Planting Project held the annual event in the park May 21. Dr. Donna Kester-Phillips, an avid park user, created the program with support from the NYSOPRHP in 2014 with the goal of restocking trees lost at the park due to disease and recent harsh winters. She said it was the fourth memorial planting.

Andy Hillman, park manager, said, "This is a super program that Donna Kester Phillips came up with. The October Surprise storm in 2006 took out hundreds of trees."

Participants made a contribution to honor a friend or family member, a dedication for a special event, or just to remember a special memory of the park.

Pat Hardison, who came to the Beaver Island tree planting with her husband Mike, said that she was planting a white oak tree "in remembrance of my brother, John Patterson, who passed away last June." Hardison said that she chose the white oak as a way to remember her carpenter brother, who died at the age of 51.

"He loved to work with oak," Hardison said, adding, "He was from Grand Island and his memory will always be here, in the park he loved."

Myra Kaiser planted a tulip tree in memory of her husband, Jim, who passed away a year and a half ago.

Jim, born and raised on the Island, built a little house back in the woods.

"His yard was his park. He said, 'I am going to mow the park," Kaiser said. She added, she was happy to plant trees, a necessity with the impending impact of the emerald ash borer, which could wipe out large amounts of ash trees on the Island in the years ahead.

"Our whole yard is ash trees." Because the emerald ash borer is in Grand Island and is damaging island trees, Kaiser said that it is only a matter of time before she loses her trees. "I am going to cry because everything is ash." 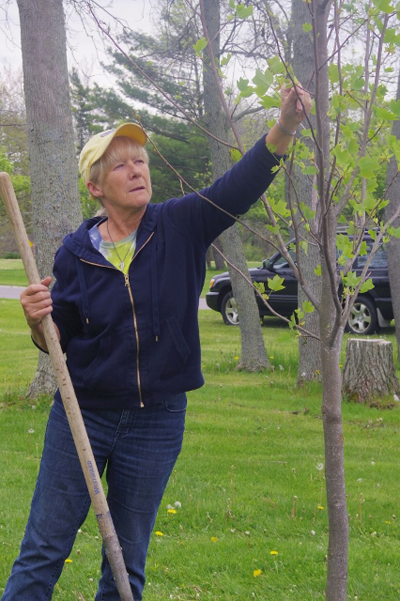 At a memorial tree planting May 21 at Beaver Island State Park, Pat Hardison, pictured above, planted a white oak tree in remembrance of her brother, John Patterson, who passed away last June. Myra Kaiser, below, planted a tulip tree in memory of her husband, Jim, who passed away a year and a half ago. (Photos by Alice Gerard) 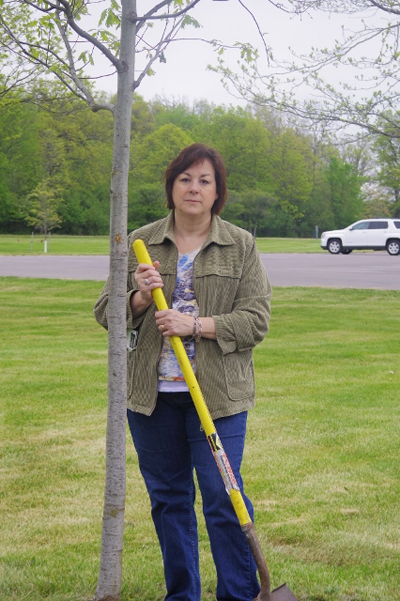