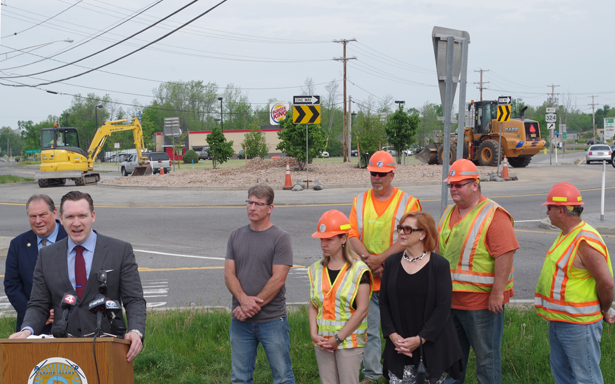 New York State Department of Transportation workers are putting the finishing touches on the new look to the roundabout.

Town and state government leaders held a press conference Thursday morning to discuss the changes at the intersection, and there was plenty of thanks and praise going around and about.

With Department of Transportation workers finishing work in the background, Town Supervisor Nathan McMurray, Councilwoman Bev Kinney, Assemblyman John Ceretto, and representatives from the DOT spoke at the media event, putting final stamp on the months-long effort by the newly elected town officials to rework the intersection.

Kinney said, "When Nate and I were campaigning going door to door, one of the things we heard almost the most was 'Do something about the roundabout. It looks awful. It's ugly.' " She praised McMurray for his efforts in making the roundabout redesign come to fruition in his fifth month on the job.

McMurray in turn thanked Ceretto for his help at the location, which is a state thoroughfare.

"The new design of Grand Island's southern entrance is a wonderful improvement and will be a welcome sight for residents and visitors alike," said Ceretto. "After receiving feedback from the local community, I was eager to inform the Department of Transportation late last year about the necessity of this project and I'm glad to see that they have followed through with the town. I look forward to working with residents and town officials on future beautification and development projects on Grand Island."

Ceretto praised McMurray, saying the two are "working as a team to make this community better" on issues such as the roundabout, tolls and pollution.

The new design features changes to the center circle, with river rock replacing vegetation, and addition of white oak trees to the approach to the intersection.

"Now we have 14 of them right here," McMurray said of the white oaks, which harken back to the Island's history. "They're small, but they will grow, and hopefully our community will grow in the same way."

McMurray offered thanks to Jim Linenfelser, a Town Hall employee, for his leadership in finding solutions for management of upgrades not just to the roundabout area, but to Town Hall itself.

McMurray also touted the efforts of a new group on the Island he calls Grand Island Guardians, who will take leadership roles in beautifying their hometown.