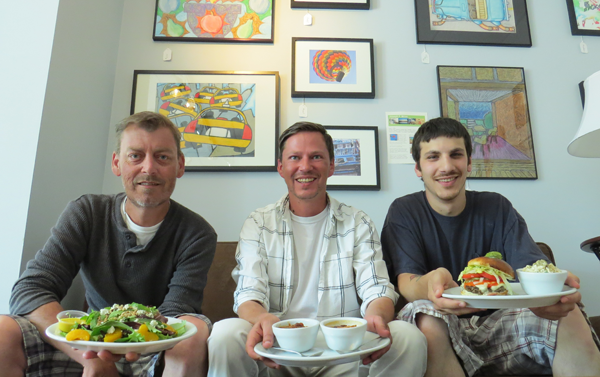 Pictured, from left, inside of Scott's Corner Art Bistro, John Caldwell, Scott Struzik and Derek Clark hold some of the eatery's top menu items, including "The Artsy" salad, "Drunken Chili" and creamy tomato bisque (also shown below), and the classic burger.

Scott Struzik and John Caldwell's foray into the food business began with a bulldog from Tennessee.

"When we were creating the food truck, Duke was just always there," John Caldwell said. "So, I'm like, 'Let's call this 'The Duke.' "

Duke, who is now almost 5, was the namesake for Caldwell and Struzik's popular rib-eye steak and cheese sandwich - as well as their food truck, Duke's Lunchbox.

Today, Duke can be seen at the corner of Center and North Fourth streets, at Scott's Corner Art Bistro.

"He's just always been involved. And he's such a character out here that people come here just to see him, and then end up coming in for lunch," Struzik said. 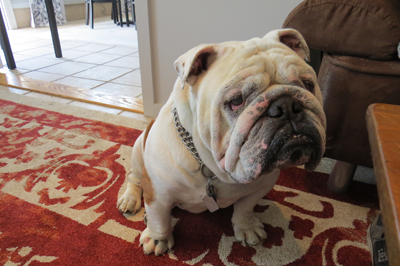 While Duke is a celebrity, it's Struzik and Caldwell's food that has people buzzing. Business owners, political leaders and passersby are clamoring to take pictures with the soups, sandwiches and salads, which they're raving about on social media.

Such attention is far cry from when Struzik started cooking.

The general public "didn't realize what a good cook he is," Caldwell said. "I always knew it."

"I've been in the closet with artwork and cooking," Struzik said. "Except for family and friends. Everybody knew I could cook and he could cook."

The two wanted to share their culinary prowess with the community.

At a time when more chefs are moving from permanent to portable, "We totally did everything opposite," Struzik said.

Fortunately, "Everybody loved the food truck," Struzik said. "We basically did all the festivals in the summer in the area. Porter on the Lake, GardenFest, Jazz Fest, Art Fest. Anything that was going on. And that was when The Pub was still doing their thing at Artpark - that big concert. That was actually our first gig, and it was a big success that weekend.

"Everybody loved the sub, and John actually researched for a couple of years to kind of perfect the sandwich how he wanted it. Because we love steak and cheese subs, and we always felt when we would get them out ... they weren't right. They weren't seasoned enough. So, we kind of wanted to perfect it, and I think we did."

When Fresh Start left the corner bistro last year, Struzik and Caldwell finally had their chance to open up an eatery - and to share that sub with more people.

"When we were setting up shop, people were coming here asking, 'Are you going to have the Duke sub?' We're like, 'Oh, yeah; that'll be on the menu,' " Struzik said.

Initially, he and Caldwell were looking at the Little Yellow House. Struzik started to plan a menu fit for that space. What they wound up with, just doors away from Sgt. Pepper's Hot Sauces, Etc. and the future site of Brewed & Bottled Craft Beer Shop, required some additions. 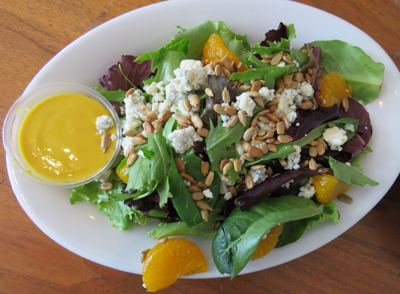 "I mean, we went from wanting to open just a little soup shop - like 'The Soup Nazi' in 'Seinfeld' - to this place coming available, and then going, 'Oh. Well, we gotta do more than just that,' because we had such a big spot," Struzik said.

Across the board, items are accented by homemade aioli, honey mustard and even blue cheese.

"We're really focused on home-style cooking, which I feel nobody does anymore," Struzik said. "Most of our food that we get in here, nothing's frozen. Our chicken, we brine it overnight. We roast it.

"And my whole thing is, if we run out, we run out. And that shows people that it's fresh cooking. ... I can't just run to the freezer and grab a bag of homemade soup."

He noted, "A lot of people say that my food has layers, which I like. When I cook my soups, that's kind of how I do it - in steps. You add your initial ingredients first. Then (for) my chili, I add a layer of whiskey to deglaze the pan. That's why I call it the 'Drunken Chili.' And then I add brown sugar." 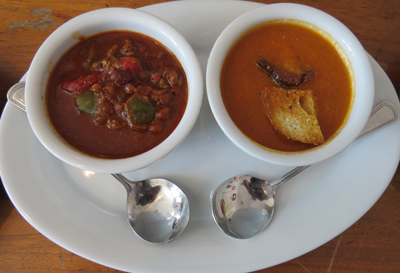 Of course, Scott's Corner is an "Art Bistro," so the food shares the spotlight with local artists - including Struzik.

"I had always done artwork my whole life, but I stopped doing artwork for like 17 years," he said. "Then I just got back into doing some artwork and kind of re-evaluating where we were going, because we ended the food truck. We had a vacation rental business that we had closed down. I ended up working in collections for a couple of years.

"I just started doing artwork and creating recipes. And then everything just kind of came together. It was like, 'Well, let's open a shop that incorporates food that we like to cook, and local artwork and jewelry and pottery.' "

Linda Schoepflin taught Struzik when he was a student at Niagara University. She said, "I'm so happy and proud of what he has accomplished with his restaurant. It's in a quaint area of Lewiston. I love all the artwork that's displayed and other items. I have been there twice now with different people who have all enjoyed it. The food is very good and fresh. He has a variety of choices on the menu. It's a very friendly and relaxing place to go to. He has a very nice outside area to sit at and enjoy in the nice weather.

"For just starting his new business, I feel he's done a great job. I will definitely be back there."

Struzik and Caldwell are planning to take further advantage of their large patio space. They have fire pits and expect to bring in acoustic musicians.

"We just want to create a cool community over here with music, and liven this corner up. Because I feel like it had been so dead for so long," Struzik said.

When the weather cools - and here's hoping that won't be for a while - Scott's Corner may even bring in two special guest cooks - mothers Christine Struzik and Valerie Caldwell - to prepare a Sunday family dinner for guests.

Artisans on display at Scott's Corner Art Bistro include: