People from all over - students, parents, teachers, friends, survivors and the like - came to raise cancer awareness and to donate money to fight the disease.

Watch: The opening lap with survivors.

For guests, outside the event there was a soccer game; the Dance Line performed; Alpha Sigma Alpha had "Pie-a-Sister" contest; and there was food. Inside, tables were set up all along the outskirts of the gym with different unique ways to raise money. 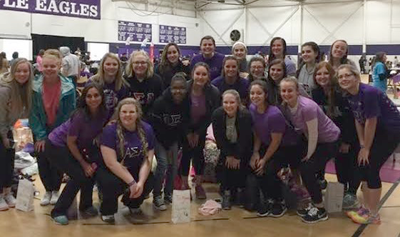 Inside is where everyone walked the track. People walked from 6 p.m. until 6 a.m. to symbolize the fact cancer never sleeps.

Also inside were posters many teams made for whom they were walking for. A banner was also inside for people to put their handprint and their name on to "lend a helping hand." There were numerous bake sale goods, games, live music and more. 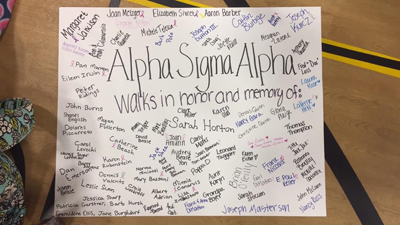 A station that was very popular was the one where, every time someone made a lap around the gym, they could pick a bead and add it to their keychain. This was a continuous keychain because, each time one passed the station, one could add another bead showcasing laps completed that night. 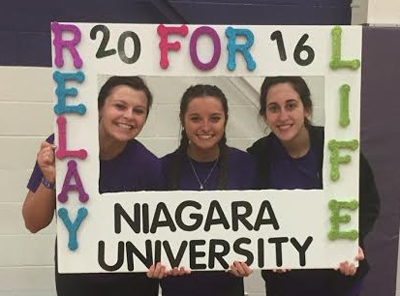 The Alpha Sigma Alpha members made shirts together symbolizing who they were walking for, while other teams did the same or wrote on white lunch bags that were placed all around the gym outlining the track. 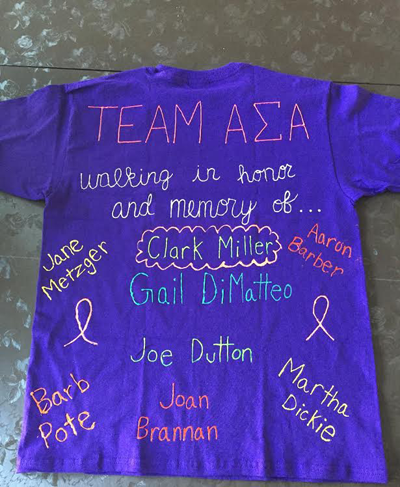 Shown is an example of the shirt the Alpha Sigma Alpha girls made and wore.

As the night went on, and the activities outside came to an end, everyone was inside the gym for the rest of the night. There were different ceremonies that took place to honor loved ones who have passed from cancer, and the survivors still with us today.

One of the most moving ceremonies was when the lights were shut off and everyone got a purple glowstick. Once it was silent, everyone cracked their glowstick in honor of whom they were walking for. There then was a silent lap around the gym. 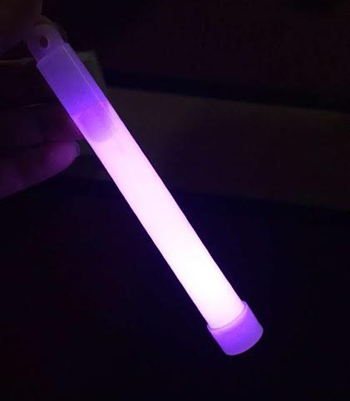 A light for hope.

Once all of the ceremonies came to a close, the night continued with members walking around the gym all night. 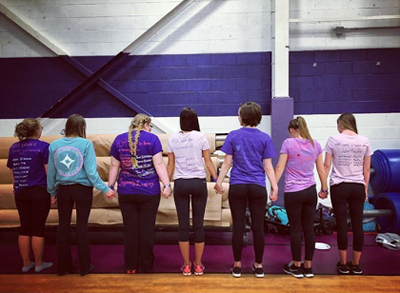