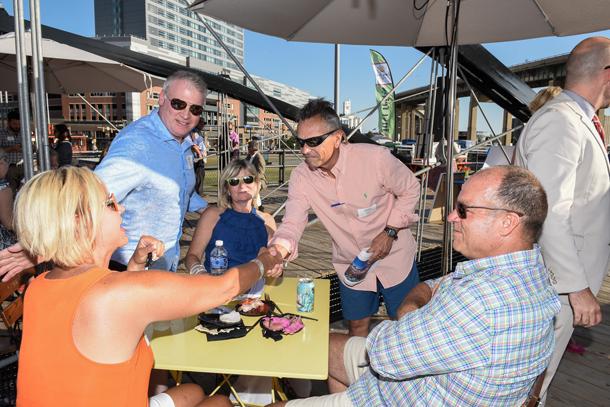 An hour after the Erie Canal Harbor Development Corp. announced an exciting, diverse Canalside summer 2016 concert lineup on May 3, Thomas P. Dee relaxes in the early evening sunshine outside, on the Aud Block, once home to the historic Western terminus of one of our country's greatest engineering achievements, the Erie Canal.

Wearing a tailored navy blue suit, a crisply pressed white shirt with a lilac print tie and sunglasses perfectly fitted on his tan face, the ECHDC president is extremely comfortable, confident and proud as he describes the rebirth of Buffalo's waterfront from its dirty Industrial past to what it is today.

An extremely fit Buffalo history buff, Dee appears much younger than his 65 years thanks to a rigorous daily routine of either biking or running this area from his waterfront residence. You wonder if his mind is drifting not too many years ago to when he sat in this same spot. Except, back then, he was inside Memorial Auditorium watching Buffalo Sabres' hockey games, Braves or college basketball games, or a multitude of concerts with Roseanne, his bride of 43 years.

Dee is living a dream in his hometown.

He proudly says he grew up in South Buffalo and Roseanne is from the neighboring Old First Ward. Dee attended South Park High School, earned an associates degree from Genesee Community College and a bachelor's and an MBA from the State University of New York at Buffalo. He was a principal at Cannon Design, serving as director of the Buffalo-based global architectural firm's construction services group, when a headhunter approached him about the ECHDC position.

He had no reason to leave a job he loved at Canon. For 28 years, he traveled the globe working on projects. He also supervised or had been involved with many of Western New York's most prominent construction projects, such as the Buffalo Federal Courthouse, the Buffalo-Niagara International Airport and HSBC Arena.

"I was recruited to take this job and I said 'No' several times. Finally, Congressman (Brian) Higgins and Larry Quinn (a former ECHDC board member) invited me to discuss it over dinner at the 31 Club," Dee recalls. "I was impressed with their passion and sincerity about the development of our waterfront, and they challenged me with an opportunity to change the face of Buffalo forever."

Dee asked for two weeks to think about this intriguing challenge.

On March 24, 2009, the ECHDC board of directors announced Dee as the corporation president of a special state agency in charge of the city's waterfront property.

Many years have been wasted by city officials chasing grand redevelopment projects, but now the strategy is more homegrown with one of its own steering the ship into the future.

"We have made incredible strides, but we are just in our infancy," Dee says as he explains the Buffalo waterfront development plan. "We still have 400 acres on the Outer Harbor that needs to be developed and we still need to begin building the 42,900-square-foot stand-alone Explore & More Children's Museum on the South Aud Block." 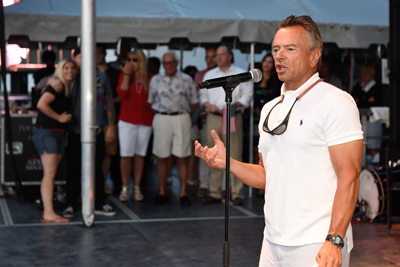 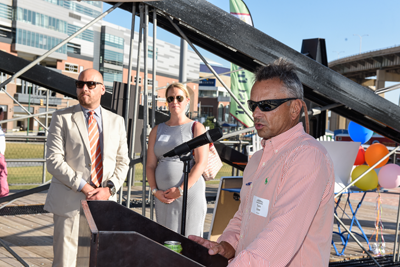 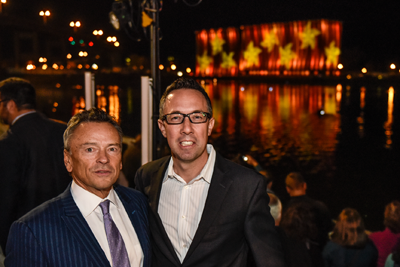 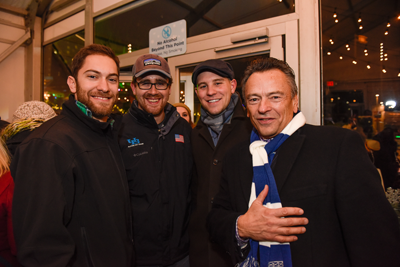 As Dee talks, guests at the VIP party to announce the concert series stop to shake his hand and thank him for what is happening on our waterfront.

"I hear it all the time and it makes me feel good, because we finally deserve this," says Dee, who made sure there are displays prominently and permanently displayed that tell the story of Buffalo's glorious past when it was a vibrant waterfront metropolis bustling with commercial activity in 1850.

"So many people of all ages tell me, 'I have always heard about the revitalization of Buffalo's riverfront and waterfront, but I came to believe it would never happen in my lifetime,' " Dee says.

It is happening today.

There is green space at Canalside filled with multicolored Adirondack chairs and a new, expanded boardwalk adjacent to the Buffalo River. There is a sand beach for kids, a refreshment stand and vendors offering all types of water activities. Canalside's neighbor, the Buffalo and Erie County Naval & Military Park, has been on the waterfront for nearly 40 years. The park has been setting attendance records each year since Canalside opened and, thus far this spring, it is tracking 30 percent ahead of last year's record number. Prior to Canalside, the Buffalo waterfront was flanked by abandoned buildings and vacant city blocks and overridden with blight.

Dee's objective is to make our waterfront Buffalo's backyard and he loves to hear suggestions from residents or the countless number of visitors from across the country and the world who simply love Canalside. When they asked for a restaurant on the waterfront five years ago, Dee set in motion the opening of Liberty Hound inside the Naval Park Museum.

"Buffalo deserves this. Buffalonians deserve it," Dee says of the re-envisioned Erie Canal Harbor, whose nickname back then was "America's Gateway to the West."

Dee loves to talk about the "three-legged stool" when describing this massive project that includes a lot of ideas from the public.

"First, you need vision," says the man who could have invented the word. "No. 2, you need leadership; and No. 3 you need money."

The bipartisan leadership team could not be any stronger, with Dee as president of the agency that oversees all design, engineering and construction plans for what has become one of Buffalo's largest urban redevelopment undertakings to date; one of the region's most successful and respected business leaders, Robert D. Gioia, is chairman of the ECHDC board (He is also chairman of the John R. Oishei Foundation.); Higgins; Gov. Andrew M. Cuomo; Buffalo Mayor Byron B. Brown; and Erie County Executive Mark Poloncarz.

Money, and lots of it, has been supplied by New York state, as this project has become a centerpiece of Cuomo's initiative to revive Western New York. It also needs private support, and the Benderson family began by renovating the Donovan Building into One Canalside for $50 million before Terry and Kim Pegula spent over $200 million in building Canalside. Explore & More is expected to raise over $10 million before it opens its doors.

While Canalside and its neighboring winter ice rinks in the canals receive a majority of the waterfront publicity, Dee's small, but efficient staff is also involved in redeveloping the Outer Harbor, just south of Canalside. There is also the Ohio Street Corridor, which he calls "the yellow brick road," running along the Buffalo River. Once a forgotten access road, the repaved street connects the public to a new Buffalo Harbor State Park - the city's first state park.

This will be the first year for the Rich Entertainment Group, a Rich Products subsidiary, to manage events at the Outer Harbor. Its announcement will be soon. Mindy Rich, an original member of the ECHDC committee, is vice chairwoman of Rich Products Corp. and president of its entertainment group, which lists among its business interests The Travel Team, a prestigious golf course outside of Palm Beach, Florida; B.R. Guest, Ltd. Catering company; three professional baseball teams, including the Buffalo Bisons; and four restaurants, including Pettibones Grille inside the ballpark, the Glen Iris Inn in Letchworth State Park and two in Islamorada, in the Florida Keys.

Today, a new piece of Buffalo history is being written - one that will be enjoyed by residents and visitors for generations.