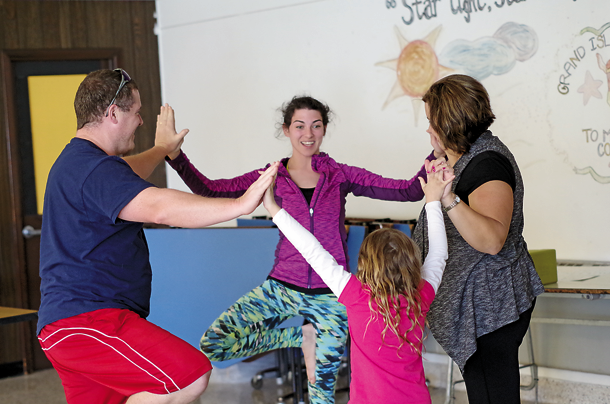 Jeanna Duarte-Schwartz demonstrates the family tree pose on the stage in the large cafeteria. She's a kids yoga instructor with Soma Cura in the Tops plaza. Soma Cura will run a kids camp from July to Labor Day on Wednesdays in the Town Commons. (Photos by Larry Austin)

Tan Shagar, R.N., of Niagara Falls Urgent Care said the fair "went very well. People are very interested in the services that they're hearing about and a lot of people didn't know that we were here, but we're getting the word out." 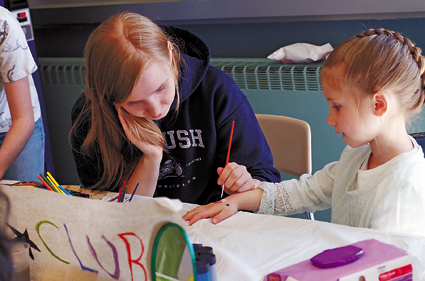 Angelina Freedman had her hand painted by Dakota Wolf, a volunteer with the Grand Island High School Art Club.

"A lot of people were interested in getting their blood pressure checked just because either they're on medication or they think they should be. So we gave them a little guidance on where to seek that care," Shagar said. He called high blood pressure "the silent killer."

"You don't know that something's wrong. When you feel it, it's way too late to handle it, so the earlier you catch your hypertension, the better your prognosis is," he said. "That's really why anyone getting up there in their age or anyone who has risk factors, they really should be checking their blood pressure to make sure that they're in a good range, and if they're not, they need to figure out what they need to do about it."

Niagara Falls Urgent Care is just 10 minutes away from the heart of Grand Island, DeJesús said.

"There's no appointment necessary," she said. So "anyone who has a primary care doctor, they don't have to wait 'til next week for an appointment. They can just come right to us that day to be taken care of."

"And we do X-ray on site as well, and blood work," said DeJesús.

Some of the fair presentations were literally "hands on," with free massages, and yoga as well. Soma Cura Wellness Center, at 2154 Grand Island Blvd. in the Tops plaza, offered mini yoga sessions.

Soma Cura's Elizabeth Smith said the fair was a great opportunity in "bringing yoga and massage and just an overall feeling of wellness to the folks here. We had people who've never even seen a yoga pose and now all of a sudden (they're) just bringing their mat, breathing on the mat. It's as simple as that."

"It can really give you a sense of calm in the craziness. I mean, here we are in a cafeteria and people are able to just sit and breath and really just feel at ease. It's really powerful," Smith said.

Soma Cura was promoting an upcoming kids yoga program, led by instructor Jeanna Duarte-Schwartz. Her brief yoga sessions on the cafeteria stage Saturday were a big hit at the fair.

"We started it last year," Smith said of the kids yoga. "And we just found Jeanna, who is great, and she's done kids camps all over," Smith said.

This summer, Soma Cura will conduct kids yoga in the park, at the Town Commons, with the approval of the Grand Island Town Board.

"We're doing it outside this year. The Town Board has been all about that," Smith said. "It's exciting. Gotta teach them early 'cause they learn to stress early, so we've got to counteract that." 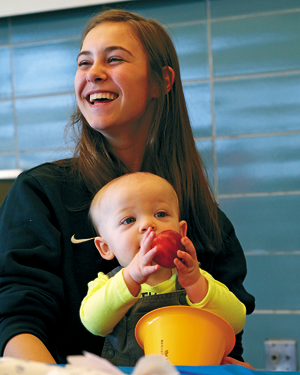 Grand Island High School volunteer Lauren Chadwick spent part of the time at the fair with 10-month-old Ethan Quinn, who took a shining to the baby gala apples. 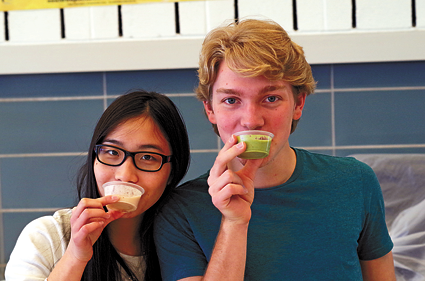 Yaling Chen and Brian Wynne of Grand Island High School sample the frozen yogurt treats that were available, along with baby gala apples.