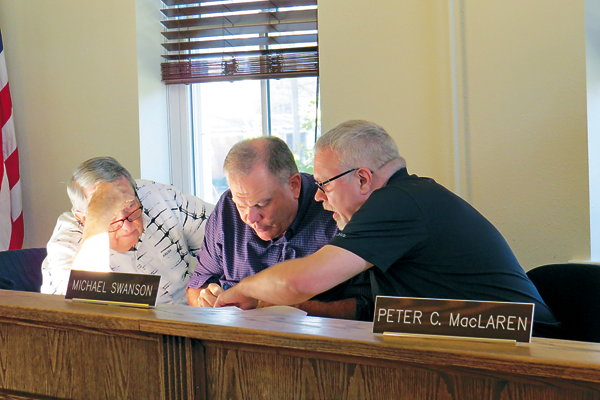 Developers of the Village of Lewiston's two largest proposed projects sought area variances at a special Zoning Board of Appeals meeting Thursday.

ZBA member George VanHoose said the purpose of a variance is to make the applicant happy, as well as Village of Lewiston residents. But judging by the comments of those in attendance at the meeting - not to mention the looks on their faces - no one was happy when the 90-minute gathering adjourned.

Ellicott Development CEO William Paladino, pursuing a Center and North Eighth Street mixed-use plaza, darted from the boardroom moments after the ZBA approved his five variances. He had listened to residents and business people chastise his plan for more than an hour. He's heard similar opinions at a handful of meetings since his company purchased the 4.1-acre property in 2012.

Fairchild Place owner James Jerge was not in attendance, but his attorney, Sean Hopkins of Hopkins, Sorgi & Romanowski (also representing Paladino), asked for more time to modify plans to build a three-story apartment complex when it appeared the ZBA was poised to reject some of Jerge's requested variances. Subsequently, all eight appeals were tabled.

About 30 residents, meanwhile, expressed frustration with the Historic Preservation/Planning Board, which they said had not listened to their concerns. Some were perplexed as to why the ZBA would make such an effort to accommodate projects not entirely conforming to the village's codebook.

The ZBA, for its part, said some concerns would be better suited for the Planning Board and the Village Board of Trustees.

Members ruled in favor of Paladino's project, considering his variances harmless to the village and agreeing the denial of such requests "would deprive the applicant of the reasonable use" of his property. The plaza received variances for primary building (three instead of one, or a rezoning of the lot); number of parking spaces (187 instead of a required 262); parking space size (9 by 18 feet instead of 9 by 20 feet, but with a loose understanding some could be regulation size); 25 percent greenspace instead of 30 percent; and two drive-thru windows - one for a north-side restaurant, the other for a south-side pharmacy - not rear-positioned.

Paladino offered to return at a later date to discuss additional variances related to apartment type and size. 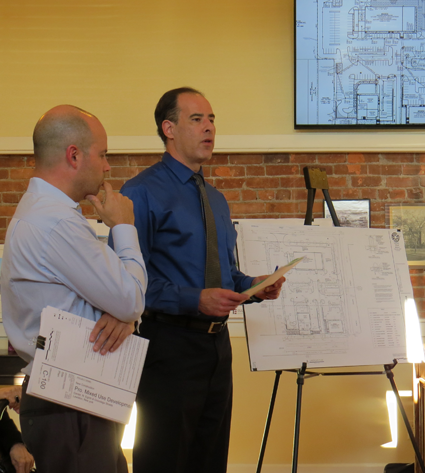 The ZBA expressed concern with Jerge's requests, which included a special permit to make improvements to the Onondaga Street right-of-way, as well as a zero-foot setback. Though the former Fairchild Manor nursing home used the municipal area for parking spaces, the ZBA did not think a new project should continue such usage - nor should the building abut those parking spaces. Without those parking spots, the project would not have the required number of spaces.

The total tally also was questioned, as a debate arose over the number of units Jerge could build. He's proposed 28; ZBA member Michael Swanson said his interpretation of the law suggests no more than 24.

There's also the matter of a half-acre behind the proposed apartment complex, which, while shown as greenspace on the variance proposal, has been considered a site for up to four new single-family homes. The ZBA said the apartment complex could be moved back to utilize some of that greenspace for parking and proper setbacks.

As the developer has options to overcome his nonconforming project requirements, the ZBA did not see hardship, which is a catalyst for variances.

"How can you give them a variance for parking when they have so much greenspace?" ZBA Chairman John Ritter said after the meeting.

Village resident Emery Simon, who owns the Lewiston Stone House and surrounding units across the street from where Paladino intends to build his plaza, said that proposal is overbuilt. He suggested the tenants would park on Center Street, which already has a severe shortage of parking spaces, and expressed concern the lot would not have adequate drainage.

Jamie Symmonds, a former Center Street business owner and current inhabitant, asked about the number of apartments and beds that would be built above the plaza's south-side pharmacy; the height of the lots' three buildings; and where specific loading and unloading docks would be situated. She said the project should conform to the village code, and not vice versa.

Simon wondered how the ZBA could offer dispensation for the two projects falling a combined 105 parking spaces short of what's required.

Center Street resident David Giusiana said Jerge's lack of parking would be significant, as his tenants would require perhaps two or three times the number of available spots. Onondaga Street occupant Chris Budde said cars would park on residential side streets, which, in that area, are already narrow.

All three men suggested Jerge's tenants would go and park in Paladino's plaza, which, again, has less than the number of required parking spaces.

Simon also wondered how much insurance Jerge had to cover what could happen in the right of way. Hopkins said his client would have sufficient protection, and could add an indemnity clause to further protect the village.

Once more, residents asked why the Planning Board had requested an in-only plaza driveway on Center Street, while recommending multiple in-out lanes on North Eighth Street.

Ritter said he's been stymied by the Planning Board with regard to addressing some residents' concerns.

Following the meeting, village trustees Dan Gibson and Nick Conde were dismayed at what transpired at the meeting, and said they are concerned the projects still haven't been properly vetted. They admitted the three boards are not on the same page.

"There is a disconnect," Conde said.

"I don't think the Planning Board did their due diligence on either project," Gibson said. "I just think they're trying to ram it through. For what, I don't know. There's a lot of things that aren't right in either project."

"There's a lot of codes that have gotten overlooked, in my opinion," Conde said.

"I don't understand why we don't get a project in here and have the project follow the code, instead of us constantly on our boards sitting there saying, 'Oh, we can change; we can search the code until high heaven until we can make it work,' " he added.

"It's trying to shove a square peg into a round hold," Gibson said.

"These developments need to come in here and follow the code," Conde said.

"It shouldn't be up to us to appease (the developers)," Gibson said. "They own the property. They should be building it to what our codes are. It's not our job to make sure that they're happy with their plan. And I don't think our boards should be suggesting things to them (to circumvent the code).

Conde said he didn't see a practical scenario wherein the Planning Board signs off on the plaza project at a meeting this coming Monday, as board members recently suggested might happen.

Conde also said he has yet to see water mitigation plans. For every one gallon of added wastewater, a project developer has to remove four gallons of rainwater.

Both Conde and Gibson said the plaza should have an exit option on Center Street. The Planning Board has said such an option is a safety risk, and previously pointed to the difficulty in exiting from the Center Street/Rite Aid plaza.

"There's ways that they can do it, to (exit) on Center," Conde said. "I'm not in agreement - I'll never be in agreement - with putting those trucks on the side streets. It's not our village (meaning the board members); it's the peoples' village. And if you listen to the people in the meeting and all of the other meetings that I sat at, they do not want it - and why do you want to jam it down their throats? I don't understand it."

Ritter agreed with that sentiment, but said North Eighth and Onondaga streets are public and can't be cut off from commercial traffic.

South Eighth Street now leads into the Colonial Valley/CVS plaza and down to the Cayuga Street mini-plaza.

Hopkins outlined both project plans. He said the benefit of the variances outweighed any potential detriment, and stated the two developments would benefit the neighborhood - and be an improvement over what's currently in place, which is a shrub forest (plaza) and beat-up building (apartment complex).

The Planning Board meets at 6:30 p.m. Monday at the Red Brick Municipal Building. As of press time, it's unclear if Paladino or Jerge will be on hand, or if they'll return for the next ZBA meeting.