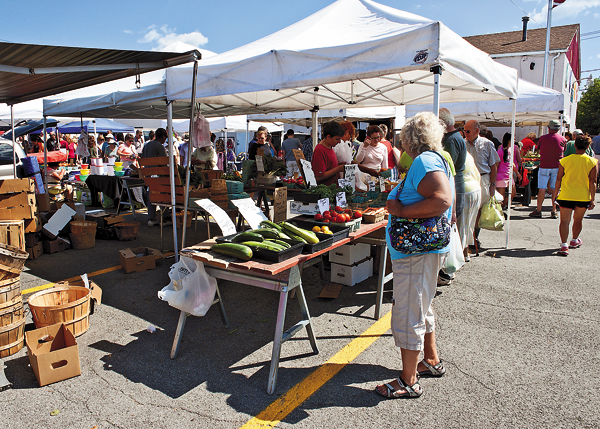 Shown are shoppers browsing goods at the North Tonawanda Farmers Market, on the corner of Payne Avenue and Robinson Street. The Town of Niagara Farmers Market will be set up in a similar fashion, and will run each Sunday beginning May 8. The North Tonawanda market will open on Memorial Day weekend and run 7 a.m. to 1 p.m. every Tuesday-Thursday and Saturday. (File photo)

Looking to wind down your weekends with a new Sunday tradition? On Mother's Day, Sunday, May 8, the Town of Niagara will launch its first farmers market at Veterans Memorial Community Park, 7000 Lockport Road. The market will be stationed in the parking lot adjacent to the park's playground and run every Sunday from 8 a.m. to 2 p.m.

Although the market will be hosted by the town's Recreation Department, Town of Niagara Supervisor Lee S. Wallace came up with the idea when thinking of additional ways to bring community members to Veterans Memorial Community Park.

"My goal is to try and increase as many activities as we can and to utilize our park as much as possible," Wallace said. He noted the farmers market "was something that I thought might work. I'm optimistic and (am keeping) my fingers crossed that it will take off."

Before moving forward on his idea, Wallace attended several other community markets, including the North Tonawanda Farmers Market. The concept of the Town of Niagara Farmers Market will be similar to that of North Tonawanda's. Farmers will have a 10-foot-by-10-foot space where they can display their products on tables or sell them out of their trucks or tents.

"That (North Tonawanda) market's been in existence forever," Wallace said. "Our goal isn't to compete with them. Our goal is to try and emulate what they do."

While being optimistic, Wallace said he is concerned about the lack of farmers who have signed up to participate thus far and is worried about whether or not they will continue to attend the market throughout the season. Currently seven farmers are on board; both Wallace and Town of Niagara Recreation Director Amanda Haseley said they would like to have more like 15 or 20.

"Trying to keep (the farmers) engaged in the process and give us a chance to build this thing is my biggest concern," Wallace said.

"Unfortunately, right now we don't have as many farmers registered, but May 8 is going to be our first one. So I'm hoping that, with the large crowd that I'm convinced it's going to bring, that more farmers will join in," Haseley said.

Brian Monaham, owner of Monaham Farms in Ransomville, is one of the first seven vendors to offer his goods at the new market. "We need a new market on Sunday," he said.

Like Wallace and Haseley, Monaham said he hopes more farmers will participate, as well.

He said, many farmers may be too "set in their ways" and hesitant to enter in a new market.

"I've been doing this for a long time and North Tonawanda's a really good market. It's just, I'd like somewhere different. I don't mind change. Change is good, but some people don't like change."

He added, "I had chances to get to other markets and I screwed up and I didn't do it. And now those other markets are thriving. So ... I want to be the first one in there, so I'm established and then I'm not trying to fight to get in there to get a spot, because some of these other markets, you can't get into. I mean, I had a chance to get in the one in Buffalo and I said, 'No, no,' (because) it was slow. It wasn't making any money. And now it's a zoo."

Despite the challenge of attracting more farmers, response from residents on the Town of Niagara market through social media has been prevalent.

"We've had a lot of noise on our webpages and on our Facebook pages," Wallace said.

"We put out some advertising on Facebook and the outreach from the community is huge," Haseley said. "Everybody is so excited for this."

As of Wednesday morning, a post announcing the market on the Niagara Recreation's Facebook page has generated 62 "Likes" and was shared with others by 88 contacts.

"So I feel like we're going to have a lot of people attend it. I just hope that people attending don't get discouraged, because there's not a lot to choose from. I'm really hoping we can still get some more farmers," Haseley said.

"People are very interested in this. So I just think the farmers need to give us a chance," Wallace said.

If the market does well, Wallace said more amenities may be offered to community members including live music.

Haseley said the Recreation Department has discussed handing out hot dogs and holding youth activities at the market if it progresses. Food truck owners have already approached her and expressed interest in becoming involved, as well.

"If we get the amount of hype and publicity and crowd that we think we are, we're going to just add to it each week," she said.

For now, Monaham said one of the biggest incentives for community members to shop at the new market is that they can save money because local produce, when in season, can be offered for a lower price than in local grocery stores.

"Every week, if I still have ton of stuff ... I'll have something special to offer. Like, I will have corn on sale or tomatoes on sale, just to get people to come in," he said.

For the launch, Monaham Farms will give a free, fresh herb to its first 100 customers, offering a choice of dill, cilantro or basil.

In addition to produce, vendors, including Monaham Farms, are going to sell flowers at the market. "So, you can go pick up a bouquet of flowers that you can give to (your) mom," Haseley said.

Farmers can fill out a basic application to participate in the market online at www.townofniagararecreation.com/pdf/farm%20market2.pdf.