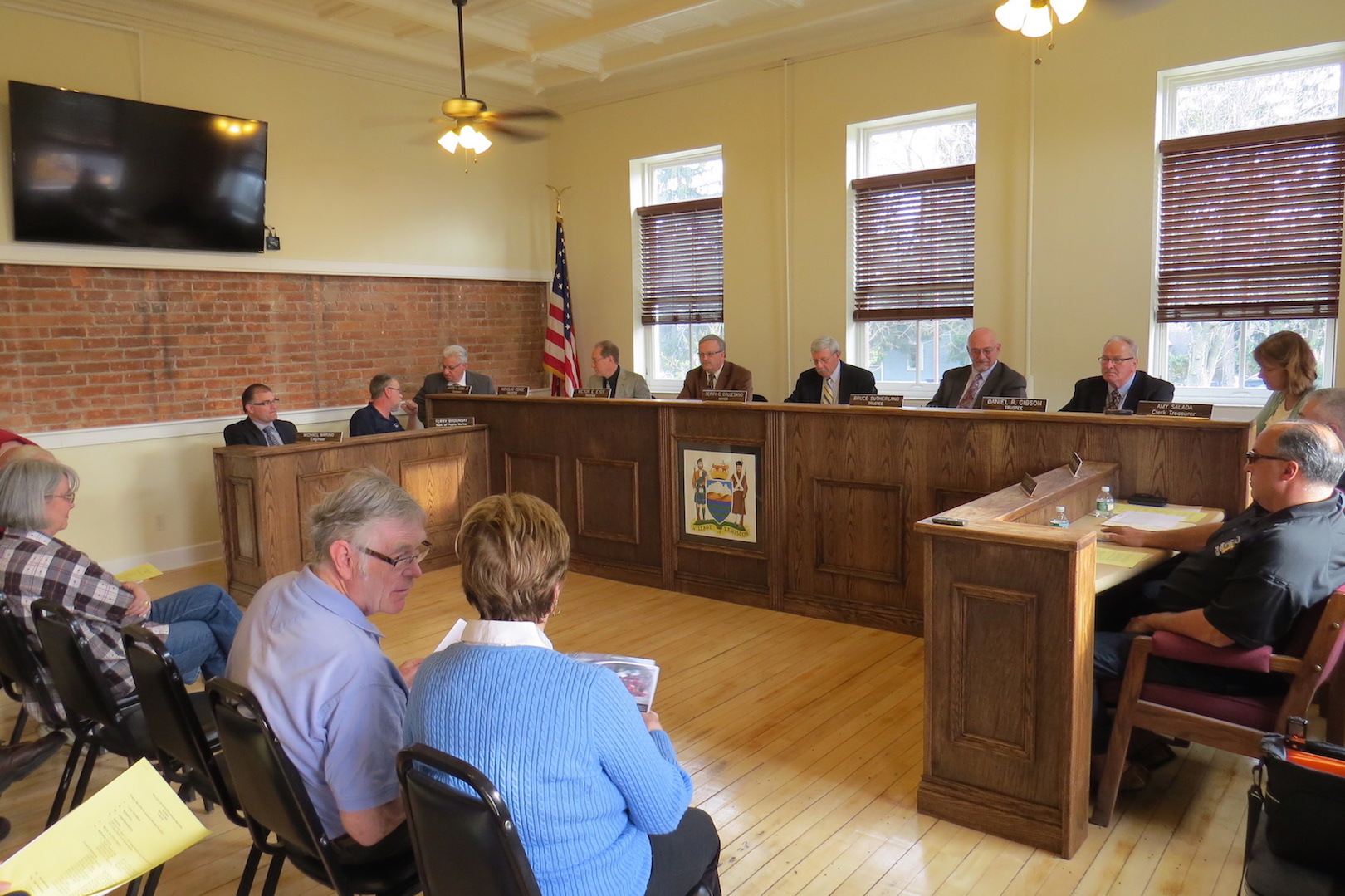 The Village of Lewiston Board of Trustees met Monday inside a new boardroom.

"This budget is not nearly as firm as budgets in the past have been. That is primarily because we are still negotiating our collective bargaining agreement with our DPW employees," Deputy Treasurer/Budget Office Edward Walker said.

He explained, "We did put in for a budget for potential increases in salaries," for both the Department of Public Works and village employees. However, "The second to the last page shows salary - the salary structure that we're required to put in the budget - and that is still all of the current salaries. Because we don't know what the collective bargaining agreement is going to say, and how much the raises are actually going to be - if there are (any)."

Under the state's tax cap guidelines, the village could've raised taxes 0.0012 percent - one cent - to net an extra $1,282. Trustees said the increase wasn't worth the effort.

The board expected to lose between $80,000 and $90,000 this fiscal year but, thanks in part to a warmer winter, could wind up with a balanced budget.

The next fiscal year begins June 1.

Trustees will vote to approve the budget at a special meeting 6 p.m. Monday, April 25, in the new Red Brick Municipal Building boardroom. 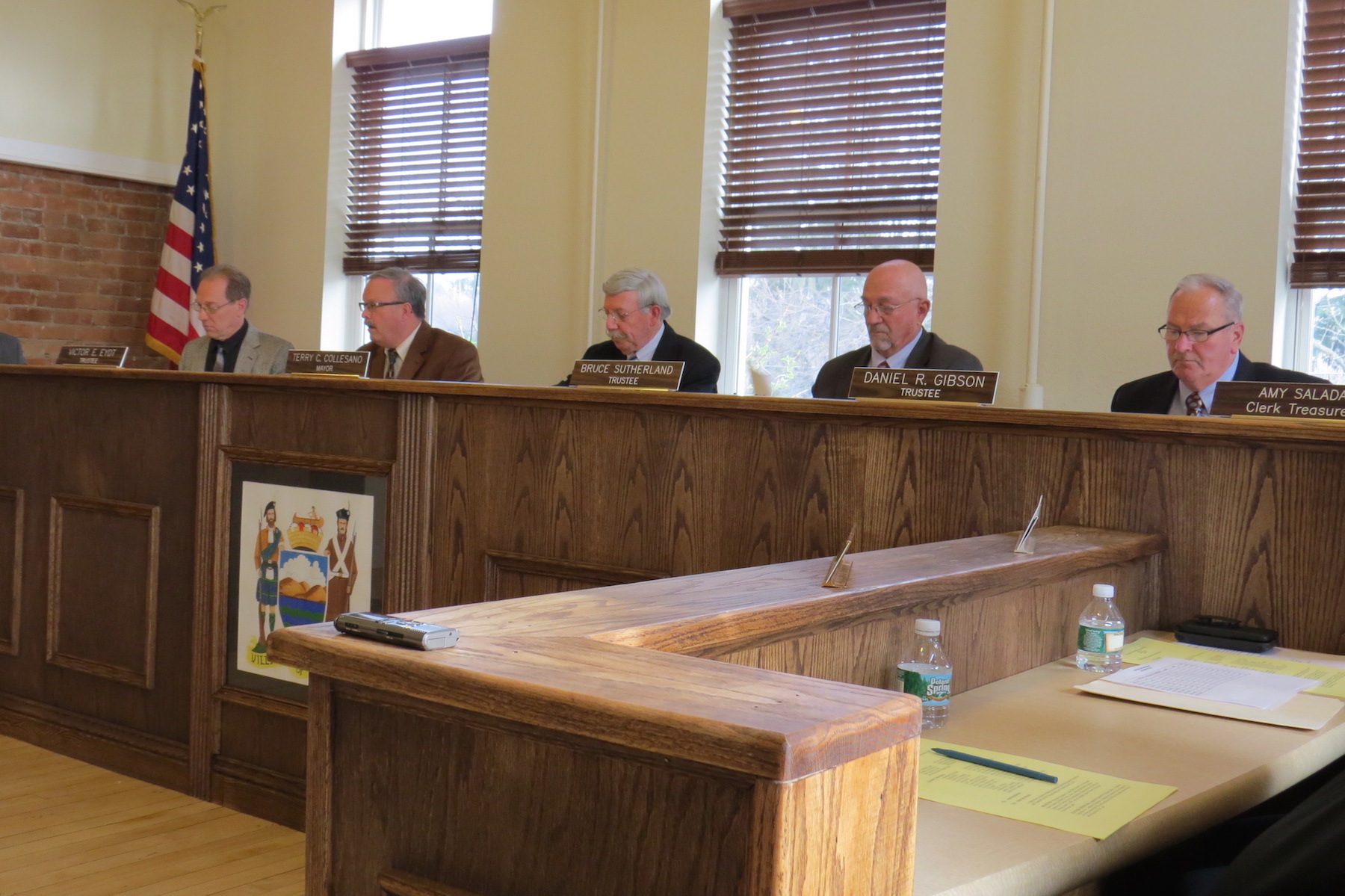 Following several weeks of renovations, the Village Board opened its new boardroom. The former Lewiston Police Department headquarters - most recently a private law office - has a newly finished floor and new paint, blinds and a carpeted dais for board members. A large flatscreen television sits on the east side and will be used to project plans and proposals. Historical photos and a large clock decorate the walls.

"It was quite a project," he said, noting the dais countertops were installed just six hours prior to the meeting. "It was put together by a lot of people. It came right down to the wire."

Eydt extended thanks to the DPW; historian Pam Hauth and her husband, Skip; his fellow trustees; and to Walker. He said their work crafted the space.

"Hopefully everybody will appreciate what we've got here, and it will last us many, many years," Eydt said.

He gave special thanks to Scott Pedley, who created a hand-drawn representation of the village seal.

Eydt said he was "absolutely amazed" with the drawing.

"It's turned out awesome," he said, as the audience applauded Pedley.

In recent months, the village had been seeking an answer to provide Lewiston No. 1 Volunteer Fire Co., which sought to continue holding a boot drive fundraiser on Center Street.

Leone said his interpretation of state law led him to conclude such activity is illegal. Still, he offered to consult the AG's office.

The firefighters' leadership, seemingly frustrated and disappointed, said the company's specific training would ensure both members' safety and the safety of passing motorists. Deputy Mayor Bruce Sutherland said the state law is vague, wherein it expounds such collections are illegal - but possibly not within villages.

Leone submitted a letter to the board. He shared highlights of that correspondence.

Citing section 1157 of vehicle and traffic law, Leone said, " 'No person shall stand in a roadway for the purpose of soliciting a ride, or to solicit from or sell to any occupant of any vehicle.' I'm emphasizing the word 'roadway.' Then it goes on to say, 'No person shall occupy any part of a state highway, except in a city or village, in any manner for the purpose of selling or soliciting.'

"Emphasis has always been made on the 'except in a city or village.' Really, the emphasis should be made on the words 'state highway.' 'Roadway' and 'state highway' are not interchangeable words. 'Roadway' is a part of a highway. 'Roadway' is the part that people drive on. 'Highway' is one edge to the other edge, including the shoulders and berms.

"So, nowhere in the state can people be in a state roadway for purposes of soliciting. They can be on state highways, on the berm part, in villages and cities, but not in towns.

"Confusing? Yes. But does it fly exactly with the state comptroller's opinion? It does."

"The bottom line is, my recommendation concerning the fire companies has not changed," Leone said. "I still think that it's illegal to do a boot drive in the center of the road."

This illegality extends to newspaper drives and any other on-street fundraising, including the annual food drive outside of Artpark's two entrances. (The latter's volunteers collect on the walking path, not the roadway.)

Leone speculated the AG's office declined comment due to the "political nature" of siding against local laws and/or local firefighters.

Mayor Terry Collesano thanked Leone for his research, but noted, "I'm sure the fire companies aren't going to be pleased with it."