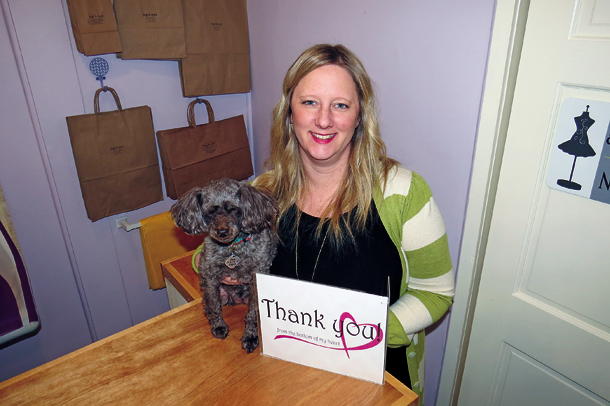 Jamie Symmonds and her top coworker, Willow, extend thanks to their customers. Angel to Apple is closing April 22.

Jamie Symmonds is not dying, nor is she ill.

She didn't win the lotto, nor settle any lawsuits, for that matter.

She is, however, closing her Village of Lewiston clothing and shoe boutique just shy of its 10th anniversary. A new store operator is expected to take over 467 Center St., later this spring or in early summer.

"I just decided, as I step into the next phase of my life - I am going to be 40 this year - that I need to figure out what that next phase is going to be about, and I think I'd rather do it sooner than later," Symmonds said.

When Symmonds shared the news with her friends and patrons earlier this week, rumors began suggesting one or more of the items listed above led to her decision to walk away from her store.

In fact, "What most people don't realize is that it has actually been in the works for almost a year, now. That's what pre-empted me closing my other store (Ever After), and then kind of gearing up here - getting my ducks in a row to put Angel to Apple up for sale."

In an email sent Wednesday, Symmonds wrote, "As the owner of Angel to Apple, I opened its doors 10 years ago, with the hope and optimism that others would see my vision for a women's clothing shop that would be unique, fun and fashionable. My journey has had several twists and turns, some planned, some unexpected, but they have all brought me to this point in my life.

"I think that with age comes wisdom and I have learned that it is most important to take care of one's health, which is what the next phase of my life is going to be about. (Symmonds was involved in a car accident several years ago, and has some residual chronic pain issues).

"It was a very difficult decision, but one that I was ready to make. Through it all, I have learned many invaluable life and business lessons, met a lot of amazing people and, last but not least, made lifelong connections and friends throughout the Niagara River Region community.

"Thank you to everyone for your love, support and patronage. It was an amazing ride!!

Jennifer Pauly, president of the Niagara River Region Chamber of Commerce, has worked alongside Symmonds in promoting Lewiston.

"Speaking as a chamber representative, we never want to see a business close for any reason," Pauly said. "Jamie has been a leader in the community, from leading on the chamber's board of directors to spearheading promotions for the village businesses; her vested interest in making sure other businesses had success is something that we valued in her as a business owner."

"She was our spokesman in a lot of things," said Cheri Clark of Chéri Amour on Center Street. Clark has seen several retailers come and go over the years, and understands the challenges facing small businesses. "(Jamie) took charge and did a lot of different things promoting the businesses, which, you know, then she later went in and wanted to be mayor. So, she obviously went beyond."

"I will miss her," Clark said.

"I'm going to remain involved," she said. "I'm still part of the Chamber of Commerce. I still head up the Lewiston Advisory Committee. So, I will still remain involved. I'm still going to have a voice, and I still have - whether I own a business or not - the same views, vision, goals and aspirations for the Village of Lewiston that I did before I made this announcement, and that's probably never going to change, too.

"I think that I'll still be around to advocate and assist. And, especially with the Village of Lewiston, we're on the cusp of a lot of changes; there's a lot that could affect our business community that I think are important for not just myself but everybody to be aware of and remain involved in."

Symmonds would not name the new store operator, but said, "I have been going back and forth for the last couple months with an individual. She is local. ... Initially, she was considering purchasing Angel to Apple and all that it encompassed, but then decided that she kind of wanted to create her own identity. So, she's going to change the name, and start her own branding that way."

Pauly said, "While we are sad to see a former Business of the Year leave, we are happy to hear that a new retail store will open, geared towards women. Women are one of our main target markets to visit Lewiston!"

Pauly said she would miss Angel to Apple, which Symmonds named after her two places of residence: Los Angeles and New York.

"Her frequent trips to NYC gave Lewiston shoppers a variety of clothing, accessories and gift items that were unique. The inventory in her store was what local shoppers and visitors wanted," Pauly said.

In her spare time, Pauly was an Angel to Apple "super fan," often taking advantage of early-hour sales.

"I have shopped at Angel to Apple since it opened. Everyone in my family knew that shopping for me was easy - just buy something from Angel to Apple!" she said. "I have even been her first customer on Black Friday more times than any other person has!"

"She brought in new, exciting things," Clark said. "Her shop never got stale. She was always willing to try something. You know, she brought in the shoes. She even tried the consignment shop.

Kelly Hessinger, who worked with Symmonds for more than a half-dozen years, said, "During my time working for Jamie, I never felt less than family. Angel to Apple felt like home to me. I am glad I could have been a part of its history.

"I am sad, to say the least, but I wish her the best in her next journey!"

"Personally, I am sad to see her end the business, but understand her reason why and am excited for the plans she has in the future," she said.

As for Symmonds' next act, she explained, "I really spent a lot of months thinking that through, really taking into consideration what I went to school for (psychology and criminal justice), what my previous experience was. It's not really relevant, so much, anymore - for moving forward.

"However, I think in the last 10 years, I've developed a lot of skills and knowledge and contacts that kind of led me to start up Willow Consulting, which I'm going to primarily try to focus on promotions, marketing, small business development and event planning.

"I have a lead on a few things. I've got some possible ideas that I have in the works. Nothing is concrete yet, but I'm hoping now, that this is kind of coming to a close, that maybe some things will present themselves to me, as well. ...

"I'm kind of excited and scared at the same time about what I'm going to do next."

Since her announcement, "Everybody's been so kind," Symmonds said. "The texts that I've got. People have sent me private emails to Angel to Apple ... saying lovely things, which is nice."

Ultimately, "I hope what people realize is that I tried really hard to bring something to Lewiston 10 years ago that I had no idea what the reception would be like - because there were no other boutiques at the time in the area," Symmonds said. "Sometimes I look back and think about customers - whether they became regulars or there's people traveling through, because we get a lot of tourists through the community - people have been just, in general, very kind and helpful.

"I really, truly, from the bottom of my heart ... that meant the world to me. As a small business owner, and trying a new venture ... I don't think people realize that small gesture of kindness - how far it goes. Because there are people who try their best to bring you down. So, all it takes is one nice gesture that just can really make you feel like, maybe, in some small way, you made a little impact along the way.

Symmonds' last day at Angel to Apple will be Friday, April 22.

She said the new business owner would honor Angel to Apple's gift certificates and credits through Aug. 31.