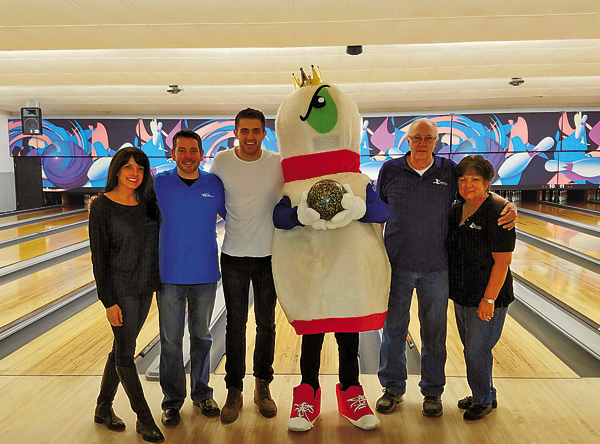 The Grand Island Chamber of Commerce will honor seven individuals, organizations and businesses as the recipients of the Citizen of the Year Awards.

The Citizen of the Year Awards are presented annually to businesses and individuals whose contributions have made Grand Island a better place to live, work and play.

Each recipient was nominated by someone from the Grand Island community. All nominations were reviewed by the Citizen of the Year committee and chosen for each particular category.

The 50th annual Citizen of the Year Awards ceremony and dinner will be held Thursday, April 28, at the Byblos Niagara Resort & Spa.

A native of the Western New York area, Joanne Kud and her husband, Tim, moved to Grand Island 39 years ago. They have two sons, Derek and Kevin.

Kud enjoyed a 25-year career in the hospitality industry, where she was able to employ her passion for hotel sales and meeting new people. In particular, she enjoyed working as the sales manager for the Holiday Inn Grand Island, while also supporting the Holiday Inn and the Holiday Inn Select hotels in Niagara Falls.

Kud's career took a brief change in direction when she left to work in public relations for the Grand Island School District and Erie County legislative offices. However, she quickly returned to what she enjoyed doing most: working in the hotel industry. Because of her passion, she became the director of sales and marketing at the Ramada Hotel and Conference Center near the University at Buffalo's North Campus.

Outside of her career, Kud served on the board of directors for the Grand Island Chamber of Commerce for more than 10 years, and was then selected second vice president, first vice president and president, respectively. During these years of volunteering with the chamber, she worked on several committees, which included developing our town's street maps, marketing materials, Grand Island phone book, and the Citizen of the Year event. Along with other chamber members, Kud would be seen each year working on a variety of the town's outdoor activities: Island Happenings, Relay For Life, the 4th of July Parade float and KidBiz. Kud was honored to receive an award for "Outstanding Leadership" from the Grand Island Chamber of Commerce.

During her tenure with the chamber, Kud was instrumental in further developing many youth programs in the community that not only recognized academic achievement, but also provided opportunities for youth development. For those students interested in a career in the hospitality industry, Kud was a mentor for the high school's Shadow Day and the School-to-Work programs. Whenever she received a phone call from the high school asking if a student could intern at the hotel, Kud would not hesitate to help.

As chairperson for the Youth Ambassador program, Kud worked with many high school students, personally accompanying them to many business and social events. These experiences helped foster their poise and confidence, while having the opportunity to meet and speak with many government officials and business leaders. Kud was also the chairperson of the chambers' scholarship committee. To sustain both of these programs, she was responsible for many fundraisers throughout the year.

She was instrumental in establishing the Grand Island High School Alumni Award. This award is presented each year to graduates of the high school who have distinguished themselves in their profession or community.

As its vice president, Kud, along with several other Island residents, established the Grand Island chapter of Dollars for Scholars. This program helps hometown students achieve their educational goals by raising scholarship funds and establishing endowments.

She is currently a director for the Grand Island chapter of Zonta International, an organization whose motto is: "Empowering women through service and advocacy." In addition to working on the organization's many committees, Kud recently has been assisting with Meals on Wheels to Grand Island residents.

Kud and her family volunteer yearly for fundraisers benefiting the National Multiple Sclerosis Society. Her most successful effort raised over $10,000 for a 50-mile walk culminating on the grounds of the U.S. Capitol in Washington, D.C.

Last spring, Kud began working with Girl Scouts Alumni; a group of women who share their love of Scouting with a new generation of young Girl Scouts. The alumni group holds multiple charitable events throughout the year. Each year during the holidays, 6,000 new pajamas and books are collected and distributed to homeless children and families in need.

The Mallwitz family got their start in the bowling business in 1971, when Art's parents, Bill and Theo, purchased Schiller Park Lanes on Genesee Street in Buffalo. When Island Lanes became available in 1980, the family jumped at the opportunity to expand to Grand Island.

At the time, the bowling center only had 12 lanes, while the other side of the building served as a dance hall. In 1984, Art and Mary decided to expand and added 12 more lanes. Over the years, the family has added automatic scoring, bumper bowling on every lane and most recently replaced the bowling machines with brand new, state-of-the-art equipment. In addition to all of the functional improvements, they have also dramatically improved the physical appearance of the facility.

The staff at Island Lanes consists of many family members, including Art and Mary's two children, Kelly and Michael, and their spouses, Chris and Michelle, their grandson Sean, and Art's sister and brother-in-law, Lynnette and Whitey. They truly are a family-run business.

Mallwitz's Island Lanes has been working closely with area youth and families for all of their 36 years. Their junior bowling program has seen many bowlers winning scholarships in local and state tournaments. Along with youth league bowlers, many children have enjoyed celebrating their birthdays at the center. Not only is this the place to go for kids, but many adults have shared incredible times over the years with friends in leagues, or just bowling for fun with their families. The business wouldn't be where it is today without the loyal customer base that continues to grow every year. Their customers are treated like family and they have established many lifelong friendships.

The Mallwitz family is always willing to help the community, from benefits for families and youth groups, helping the schools and churches, working with the Relay For Life, the Miracle League of Grand Island, as well as many other fundraising efforts.

Members age 2 years and up learn Christian sportsmanship, team spirit, athleticism, showmanship, rhythm, responsibility and confidence. The goal of the Islettes' Elite is to perform at local, state and regional parades and events, to build character, community and teaching valuable life lessons to children. They proudly carry the Grand Island name across the USA. The Islettes' Elite are three-time honored performers at Walt Disney World in Orlando, Florida. They

They are also past recipients of Walt Disney Twirl Mania Corps and Team Championships. The members have competed in Indiana at the National Championships 20 times and have won 17 national titles. The Islettes' Elite and director Heidi Sue McCormick were honored in 2000 when inducted into the New York State Twirling Hall of Fame.

Over 30 years, more than 200 twirlers and percussionists have participated as members in the family oriented organization. Alumni have gone on to perform at national sporting events and as featured college twirlers with numerous scholarships or as coaches themselves. The twirlers complete many hours of community service throughout the year. In addition, the twirlers put in many hours of practice while still maintaining honors grades, as education is a priority. All staff members are lifelong Island residents who have "grown up" as members of the team. The Islettes' Elite is not a studio or business. All staff members volunteer their time.