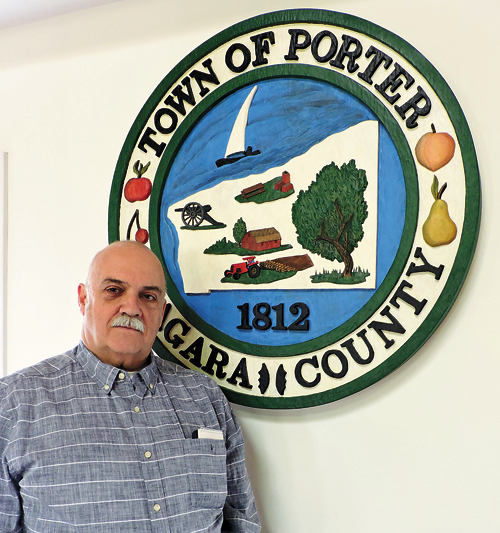 Chamber Gala: Hon. Truesdale is Town of Porter Citizen of the Year

Town of Porter Justice David Truesdale has been chosen by Supervisor Merton Wiepert and the Town Council as the 2016 Town of Porter Citizen of the Year.

With just under 35 years as a public servant, Truesdale has provided leadership and created an example of good citizenship while enhancing the well-being of the community.

Truesdale loves living in this part of Niagara County. He owns 125 acres of farmland with his brother. He is a lifelong resident of the Town of Porter and graduated from Lewiston-Porter in 1966. The quality of life is unparalleled, and living in the Town of Porter gives him the benefit of serving the two distinct communities of Youngstown and Ransomville. This means two great historical societies, two great libraries and two great garden clubs, to name a few perks.

As Town of Porter justice for the past 35 years, Truesdale has enjoyed the variety of his job in his ninth term, from having a positive influence on those he works with, adjudication of traffic, criminal, environmental and civil cases, to sentencing couples to life ... with marriage. He also held a part-time position with the Town of Porter Highway Department for more than 30 years.

Truesdale's 32-year teaching career at Wilson Central School, where he taught fifth and sixth grades, has coincided nicely with his role as town justice. He completed his graduate studies at Niagara University in 1975, and completed basic judicial training through the New York State Unified Court System in 1981, while successfully completing advanced training each year since then.

He has been a member of the Youngstown Volunteer Fire Co. for the past 40 years, having held the offices of president, vice president, secretary, trustee, assistant chief and now treasurer for most of those years. Truesdale served as chairman/co-chairman of the fire company Field Days and/or parade for more than 35 years.

Truesdale is also a past president of the Niagara County Magistrates Association.

In his free time, you can find Truesdale restoring vintage vehicles, including a 1932 Mack fire truck. His 1955 Ford fire truck made an appearance in the 2015 Youngstown Labor Day Parade, and Truesdale said he hopes to make another appearance this year.

He has also volunteered as a flight attendant, providing snacks and care for the animals with Pilots for Paws, a nonprofit animal rescue and transport organization. Now you can find him at night court every Tuesday, with Justice Wayne Pollow serving on Wednesday evenings.