North Tonawanda natives stand together for a photo before hitting the dance floor.

Eventgoers dressed in red danced to traditional Polish music performed by Kathy Carr and Friends and helped themselves to a traditional Polish buffet, which included potatoes and macaroni salad, two types of polish sausage, lazy pierogi and an array of desserts.

"Dyngus Day is the exact opposite of Fat Tuesday," said Cathy Brachmann, president of Dom Polski. "(On) Fat Tuesday, you gorge yourself. You celebrate, because you're not going to be able to eat all these things and you don't eat meat on Fridays until Lent is over. So you've got that 40-day window. ... The celebration after (Easter) is Dyngus Day (and) you're allowed to eat all that. You're allowed to party. Whatever you gave up, you can now eat."

Besides feasting on traditional dishes, in keeping with the Polish-American tradition, the annual event featured pussy willows, which participants could use to chase and swipe each other.

"That tradition is kind of on the same ... tone that you're subdued. Catholics are subdued for that time (during Lent). There's no partying. So the men would chase the women around and hit them in the back of the leg (with pussy willow branches). It's a flirtation. It's for flirting. It's to try and find a mate," Brachmann said.

She said the tradition of Dyngus Day is prevalent in North Tonawanda, because many Polish families settled there and remain after generations. 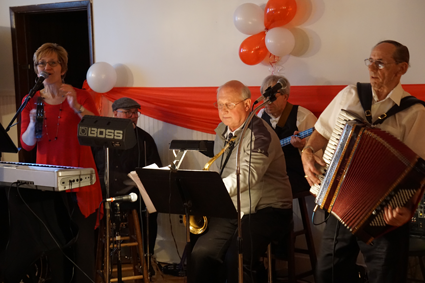 Dom Polski, which means "Polish home," has been opened for almost 100 years and originally offered Polish immigrants a place to stay while they searched for a home of their own.

"We're on the fourth generation now of Polish coming over. (Dyngus Day) is supposed to be about family. Polish is big on family. And so that's what we're trying to keep in the community," Brachmann said. "Everything we do here is about family."

"I think we have to keep our culture alive. And that's very important for families to do it together and we do it for future generations, because Polonia is what Dyngus Day is all about," said attendee Erica Wamecski of North Tonawanda.

Among the eventgoers were City of North Tonawanda Mayor Arthur G. Pappas and his wife, Linda.

"I grew up in this area down here, so I used to be a part of a lot of the festivities, and most of my neighbors and friends were all Polish. I wasn't, but I kind of fell right in with it and fell in with all the music and all the good times, and it was a great place to grow up," Pappas said.

He said, the Dyngus Day party at Dom Polski provided "food and fun and music that you can't beat. And the type of music is so uplifting; you can't help but just want to go with it." 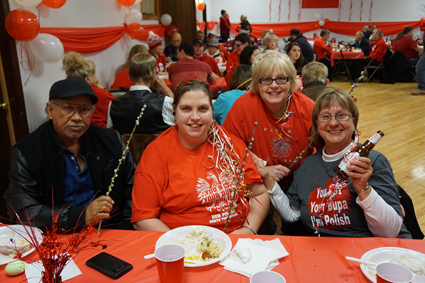