Pictured is an artist's rendering of the vestibule change coming to St. Peter's. (Photo by Trautman Associates)

Trustees in the Village of Lewiston approved a handicap-accessible addition for St. Peter's R.C. Church and School at Monday's monthly board meeting. The renovation will take place on the west side of the building, facing North Sixth Street.

"It's on the side of the church now that we have handicap parking," the Rev. Monsignor David LiPuma said. "This will allow our older parishioners or disabled parishioners to be able to park, walk in the side entrance, and take the elevator up to the church or down to the lower church hall. And it will also benefit the school, the students and teachers or families who have difficulty with stairs, to get them to the second floor of the school and also down to the lower church hall. ...

"And then we are doing some renovations within the school itself to accommodate the growing number of students that are enrolled for next year."

As for a timeline, "We're hoping to begin construction right at the end of this school year," LiPuma said. "School lets out the end of June; our friends at Trautman Associates (buffalo architectural and engineering firm) are going to take over from there."

Architect Timothy M. Rider said, "The interior portion will be ready for Sept. 1. The elevator and the vestibule addition will probably be ready in the fall. We've targeted Thanksgiving." 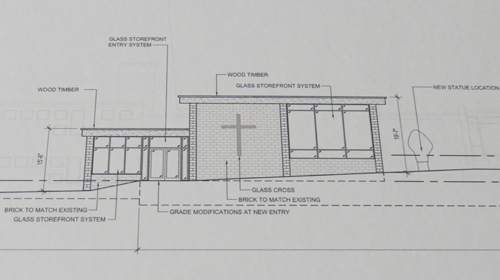 "It's different from the other three throughout the year in that we have a very short time for the residents to respond," he said. "I would like to appeal to our residents to make every effort, if you have an arrears, to try and get it paid as soon as possible during that 20-day time period that it is due. Because we will be sending out notices very quickly at the end of April.

"Normally, we give folks more time, but it's very critical in that, the first two weeks of May, we have to prepare a statement to go to the county for any arrears water bills in excess of $50 to be transferred to their taxes. It would be really beneficial for folks if they can get those in, because we can't kind of let things go."

Walker estimated the village has "around $20,000 worth of outstanding water bills that we have already taken care of" each quarter. "We'd like our residents to help us out - and help themselves out at the same time."

"All commercial buildings have to have a CO detector," he noted. "It wasn't required in the past."