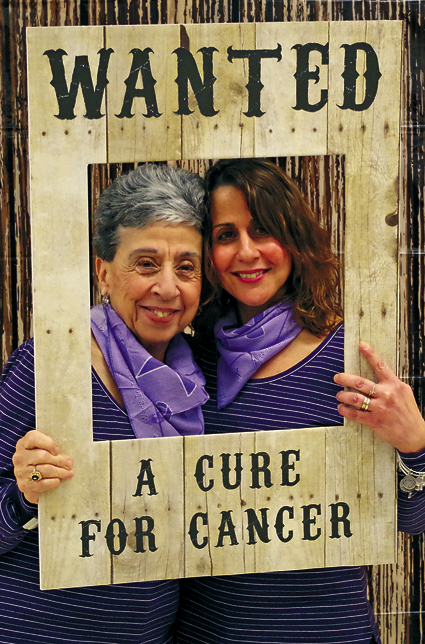 Four women, two mothers and their daughters, were honored for being both cancer survivors and caregivers at the Grand Island Relay For Life Kickoff.

At a kickoff rally Tuesday in the Connor Middle School cafeteria, GI Relay tri-chairpersons Candy Mye, Lynn Dingey and Becky Sommer-Stufkosky announced Grace Aswad and her daughter Lisa Dudley and Natalie Stanczyk and her daughter Sarah Stanczyk have been named honorary survivors and caregivers for the 2016 Relay For Life, which will take place Friday, June 10, from 4 p.m. to midnight at Veterans Park.

In accepting the honor, Dudley recalled the day 12 years ago when her mother sat her down and told her she had breast cancer. Dudley cried because "moms do not get sick," she said, but she turned into a caregiver for the first of three battles with cancer that her mother has survived.

"She survived them with dignity and strength and the will to live, and mostly acceptance," Dudley said of her mother.

Little did Dudley know that, just a few years after her mother's first cancer diagnosis, the tables would turn. Dudley was diagnosed with breast cancer, and her mother would be her rock, taking her daughter to chemotherapy appointments and providing love and support.

She and her mother walked the track at the Relay For Life when Dudley was named an honorary survivor that year.

"We knew it made us feel even stronger and that we're not alone," Dudley said of walking the track at Relay.

They've walked at Relay together ever since and will walk again to Give Cancer the Boot this June, Dudley said, noting the 2016 Relay theme.

After her daughter spoke, Aswad followed by singing a moving rendition of her favorite song, "You'll Never Walk Alone."

Stufkosky introduced another cancer survivor, Natalie Stanczyk, who in the past two years has supported her college-age daughter Sarah in cancer treatment, and then battled cancer herself.

Sarah, a senior at Duke University, will graduate on time this year despite undergoing chemotherapy.

"I would fly down every two weeks for her chemo. She wanted to try and stay (in school) and she did it," Natalie said. They walked together at last year's Relay. Natalie was diagnosed in May and completed chemo just recently.

"This year will be special because we've both been through this in the passed two years," Natalie said of the upcoming 2016 Relay.

"The one thing that this has taught me is how wonderful people really are," she said, praising her family, friends and co-workers who have supported her.

"There is always a meal at the door ready for me and my family," she said.

Also at the kickoff, Missy Stolfi of the American Cancer Society presented Fresenius Kabi, a health sciences company, with the Crystal Award to recognize the company's Gold Sponsorship of the Relay For Life.

Stolfi said she loved bragging about "what a wonderful community is at Fresenius Kabi."

"It's not just a business, it's not just a company, it's a true community, and that's exemplified definitely by the folks here in the room today," she said. She praised the company for the company culture and "the work they do year-round to support Relay For Life, the environment they create of support to allow our volunteers to do the work that they do for the American Cancer Society, the enthusiasm and the passion they bring to the event itself."

In accepting the award, Tony Pavell, plant manager of Fresenius Kabi thanked the American Cancer Society and noted the slogan at the company, "Saving Lives One Vial at a Time," mirrors the ACS mission and values.