The Grand Island Board of Education will review applications for its superintendent of schools position and conduct preliminary interviews for a new superintendent March 12.

The board declined to renew the contract for Lawrence and initiated a search process to find her successor. Lawrence is under contract until the end of June.

The board reviewed the applications March 1 and, after the preliminary interviews, will conduct final full-day interviews of candidates April 11, 12 and 14.

The district said Fusco "will be reaching out to leaders in our educational community to assemble interview teams that represent members of our community, faculty and staff for the full-day interviews. It is not too late to express your interest to participate in the process."

Those interested in participating on the community team can contact Board of Education President Lisa Pyc at [email protected]. 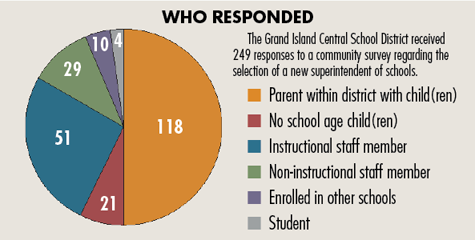 "Through the survey, we have learned that being active in the community, willing to commit to the district, and being visible and accessible are among the qualities that are most valued and sought in the next district leader," the district's press release said. "The district thanks all who completed the online survey; the input will prove valuable to the board as the process continues."

The Starpoint Central School District Board of Education has selected three final candidates for its superintendent of schools position, including one from Grand Island.

Each finalist met all day with various stakeholder groups (teachers, external stakeholders, students, support staff, and administrators) who interviewed candidates and provided the Board of Education with their feedback.

Starpoint Board of Education President Michael Zimmerman stated, "The board is very pleased with the number and qualifications of all the applicants. The three finalists have the desired professional qualifications and attributes that the board is seeking for this critical leadership position. The board looks forward to receiving feedback from the stakeholders and public as part of our search process."