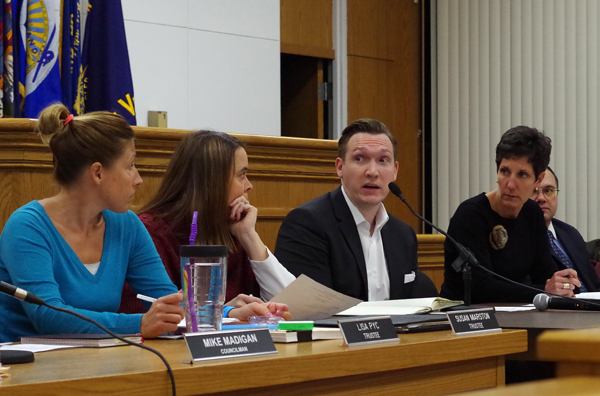 The Heron Pointe project under construction on Grand Island Boulevard worries Grand Island Board of Education trustees who are concerned with class sizes at Kaegebein Elementary School.

She asked the Town Board members for insight to ongoing development, "especially the large apartment complex across from Dunkin Donuts." It was the second time at a meeting of the board that she had raised concerns about Heron Pointe.

Town Supervisor Nathan McMurray said, "It's going to be a huge, huge facility. It is going to be big. It's a big complex."

Children from Heron Pointe, a 240-unit complex, would attend Kaegebein next year.

McMurray said several developers have come in to look at places on the Island to develop, which illustrates the need for an updated master plan and a reconstituted Long-term Planning Committee.

As Rane Property Management's legal representative Sean Hopkins pointed out recently, the density of Heron Pointe, at approximately 250 units, is much less than the town code allows. He estimated the code would allow 400 units at the location on Grand Island Boulevard.

"And if someone has the right to build something within zoning standards, there's not a lot we can do, frankly," said McMurray. "They have a legal right to build it. However, if we can create a zoning plan and a map for the Island that we all agree upon that helps control density, that's the best protection we have.

"And I should warn people, there's other projects on the horizon," McMurray said.

Carroll encouraged the district and town develop a dialogue on development "as we try to build our long-term planning and decide what our priorities are." Class sizes impact staffing needs and the physical space demands, she said, and the school board has always had a priority in keeping and maintaining class size at the most appropriate level.

Councilman Chris Aronica responded that "you can't overlook the tax implications too," from a development standpoint. "There's got to be a balance. You just can't say no to everything."

"We don't have a lot of size at Sidway to expand without building an addition, and that's costly," Bobeck said.