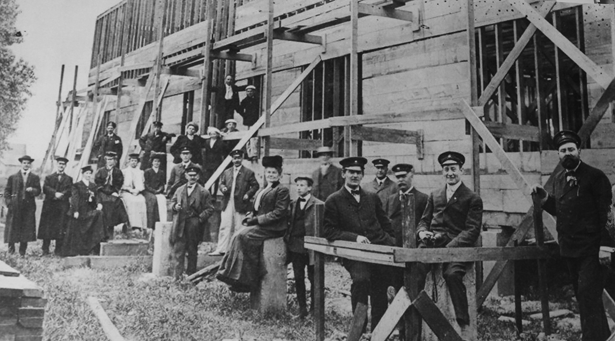 •Taken from the Feb. 19 Islandwide Dispatch

A barn demolition has yielded a treasure trove of historical "gems" for the archives of the Buffalo Launch Club - records that go back to the club's foundation in 1903.

Contractor Paul Lunick discovered the documents while doing work at the East River Road property of the late architect Roswell Pfohl, a past member and historian for the Launch Club.

How significant was the find? "It's huge!" said Tom Frauenheim of the BLC's Heritage Committee. "What's nice about it, people cared enough to realize what they had there - and share it."

Lunick and his wife, Kathy, recently gave the documents to the Launch Club, all neatly labeled, categorized and placed in pristine envelopes for safekeeping. Frauenheim is in the process of determining how to best archive and present the material as an asset to the club's members, present and future. 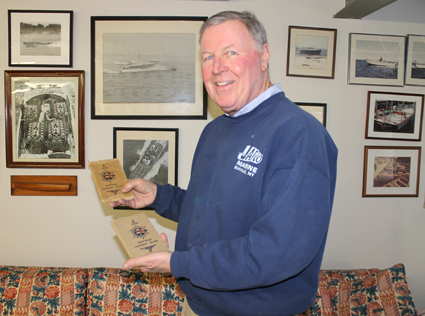 Buffalo Launch Club member Tom Frauenheim holds two club rosters, one from 1905 and one from 1908. These are among artifacts collected by the late Roswell Pfohl, former club member and historian. Contractor Paul Lunick found the documents last year while he was doing a barn demolition and clean out at Pfohl's former East River Road residence. (Photo by Karen Keefe)

What brought the club together in the first place? Why did they move the club from Buffalo to Grand Island? What role has the club played in the history of Grand Island?

Roswell Pfohl, who joined the club in the 1920s, had answers to these questions and more in his collection of rosters, photos, chronologies and historical accounts.

For example, in Roswell Pfohl's BLC documents, you can learn that:

• The club voted in 1906 to buy property for its new clubhouse on Grand Island from the Bedell family, whose descendants built and ran the Bedell House Hotel in Ferry Village from 1877 until a fire destroyed it in 1988.

• Also in 1906, club dues were only $5, but Secretary Roger F. Williams noted that the club intended "to build a club house and docks as soon as possible ... to erect a property of which every member will feel proud." He added, "To do this, the Club will need money, $800 in cash has been donated ... and $3,500 worth of bonds subscribed for." Donations, while not required, would be gladly accepted.

Pfohl noted events of club history in a wry tone in the first of a series of articles he wrote in 1932 in the BLC newsletter "The Megaphone." 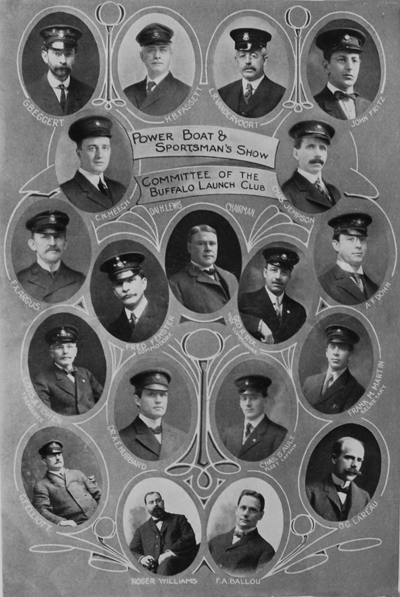 Engine trouble may well have sparked the formation of the BLC, Pfohl surmised. He said that every Saturday he found boating enthusiasts on the Niagara Frontier waterways "experimenting, adjusting, tinkering and perhaps verbally exhorting their engines in order that on Sunday, they might enjoy a day's picnic on the water." Local boater A.E. Hubbard maintained that the old two-cycle motors were "infernal" not "internal" combustion engines. Hubbard "felt the formation of a powerboat club, which might serve its members as a clearing house for their common troubles, would do much to further the sport," Pfohl wrote. It was Hubbard, chosen as chairman, and 18 other like-minded individuals who founded the Buffalo Launch Club.

One of the most compelling stories of the past is how the BLC rose again, like a phoenix, from the ashes of a 1931 fire that destroyed the Grand Island clubhouse they were so proud of.

In Pfohl's papers, you read: "A fire of unknown origin destroyed the clubhouse and the outbuildings on the afternoon of Aug. 20, 1931, while preparations were in progress to celebrate on Saturday, Aug. 22, the 25th anniversary of the construction of the building. The event was to be called Louis Fischer Day, in honor of the active charter member who was trustee and a prime mover in the 1906 enterprise."

Commodore Fred G. Handler called an Aug. 24 meeting of the board and appointed a committee, with Fischer as chairman, for the appointment of architects to begin sketches for a new building. Pfohl and Fruehauf were the architects.

In the club newsletter of April 1932, Commodore Robert R. Huntley captured the can-do attitude of the club. "As our fine new clubhouse reaches completion, the old B.L.C. spirit rises to the top again. Sometimes a disaster comes as a blessing in disguise. Perhaps the burning of the old clubhouse gave us all a true appreciation of our loss - of how large and irreplaceable a spot the Buffalo Launch Club has always held in our hearts and our affections - something we couldn't do without."

The history of the club and the history of Grand Island have been intertwined for more than a century. The sounds, sights and celebrations at the club's 501 East River Road facility are part of the heartbeat of the community.

From the roar of engines in the days of powerboat races to the clink of glasses as newlyweds celebrate in the beautiful setting overlooking the Niagara, Grand Islanders have cherished the club's history through the years.

Pfohl's collection adds to club archives that could teach a lot about what makes this community tick, and what makes people regard the Island as special.

"How do you preserve it?" Frauenheim asks. "How do you pass it on? How do you keep people interested? How do you present it? How do you tell a story?" He and the dozen or so members of the Heritage Committee will be tackling these issues in the months to come. It will involve lots of scanning, archiving and, eventually, he hopes, educating. "What you want to do is keep generations of people coming" through the Launch Club. He sees club history as a real draw.

A precedent for showcasing this latest acquisition is a recent rehab that welcomes visitors with a presentation of photos and artifacts. "We tried to bring historic significance to the entranceway and lobby when you walk into the club," Frauenheim said. Exhibit professionals were brought in, and the life and emeritus members funded the project.

That theme continues upstairs in the Heritage Room, where photos tell the story of the club. "You have an asset," Frauenheim said. "Your asset is the history here, the nice grounds. People don't know anything about the history. If you took them upstairs in that Heritage Room, not only would it be a place where you could present your history, but also for new people who are coming in, or for prospective members, all of a sudden it kind of gives them the feeling of 'Wow, this place is really special,' — and that's what it is."

He suggested that club members look to their immediate surroundings on the river for more inspiration - on a bicycle or kayak, for example. "Take advantage of what Beaver Island and Grand Island have to offer as an additional asset to the Launch Club. ... Go over past River Lea and into Beaver Island on your bike - and it's great!"

In Frauenheim's view, club history is the prologue and the context for the present. "So much has evolved in boating over the past 100 years," he said. "The more enthusiasm people have in sharing - it's like the rest of the story.

Stained-glass artwork decorates a window of Roswell Pfohl daughter Peggy Bauman's home on East River Road. The artwork is comprised of salvaged glass from the aftermath of a fire at St. Michael's Church in downtown Buffalo. Bauman's father designed the new altar when the church was rebuilt. (Photo by Karen Keefe)