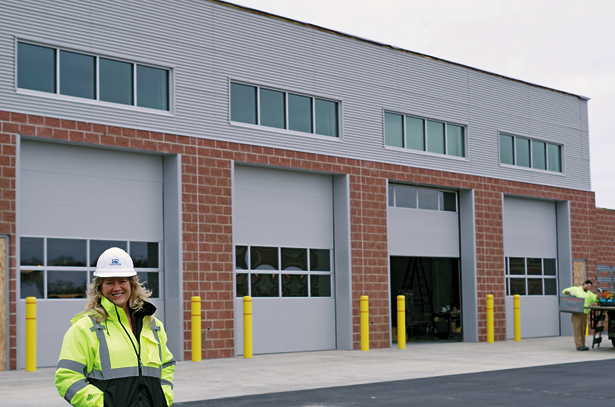 Transportation Supervisor Theresa Alizadeh is pictured in front of the future home of the Grand Island Central School District's Transportation Department. The building is slated for opening in May. (Photo by Larry Austin)

The district is eagerly anticipating the opening of its new transportation facility behind Sidway Elementary School.

Board of Education trustees received a status update for the $6.4 million project Monday at their regular meeting in the Professional Development Room of Grand Island High School. John Robinson, project manager from Campus Construction Management, briefed the trustees on the progress of the construction, which is on time and on budget.

"This is truly a one-of-a-kind facility in this area," Robinson said. "It seems like other districts around are calling wanting to come by and take a look."

"We'll be turning over the building to your staff in May, the beginning of May this year, fully functional, and they're looking forward to it," Robinson added.

One trustee can hardly wait to see the facility.

Grand Island Superintendent of Schools Dr. Teresa Lawrence said she visited the work site Monday and said the building was "coming together remarkably well" with what she called "high appeal." She credited the planning and vision of staff in the building's creation. The building had its genesis with now-retired Transportation Supervisor Jack Burns. Campus Construction Management is working closely with Theresa Alizadeh, Burns' replacement as the district transportation supervisor, and staff such as Tim Blevins, chief mechanic.

Lawrence said Monday she foresees broad interest in the transportation facility similar to that of the district's STEM building for instruction in science, technology, engineering and mathematics. The 20,000-square-foot addition to Grand Island High School has drawn the interest of other districts, as well as government officials such as State Sen. Marc Panepinto, who toured the facility recently. Likewise, the transportation facility will be a draw.

"As we have had over 30 tours to our high school tech wing, I suspect that we will also be a site where individuals come (to see) an ideal space," Lawrence said of the transportation facility. Lawrence called the space "phenomenal," "beautiful" and one the community can be proud of.

A grand opening is anticipated in May.

A transportation facility proposition authorizing the district to borrow $6.4 million was passed by voters Dec. 18, 2012, in a referendum.

Once the transportation staff move into the new facility, the district's buildings and grounds staff will move from their Staley Road location to the current transportation building.

The building will have four working maintenance bays with two in-ground lifts and one portable lift.

Robinson said work began in February of 2015 with the old bus parking lot as the new footprint for the facility. In March and April, work started on the concrete footers and foundations along with creation of a new ring road, a half-mile paved stretch with a new entrance off Baseline Road near St. Martin-in-the-Field Episcopal Church. The ring road leads to the new parking lot and building. In May, retaining walls were constructed between the wetlands on the back of the property and the new lot and building, while underground mechanical, electrical and plumbing were completed. June saw delivery of structural steel and metal decking, and part of the structure went up with partial metal roofing. August included such work as exterior brick and insulation.

Robinson said the site "started to look like a building" in September, as the roof went on and the building was enclosed. In October, equipment such as bus lifts were installed, followed by hot water tank/boilers and piping in November. Once enclosed, interior drywall and interior bathrooms were done. Ceilings went up in January, and work began on such spaces as the driver's lunchroom and a director's office, the latter with a direct view of the entire parking lot and the more than 60 buses.