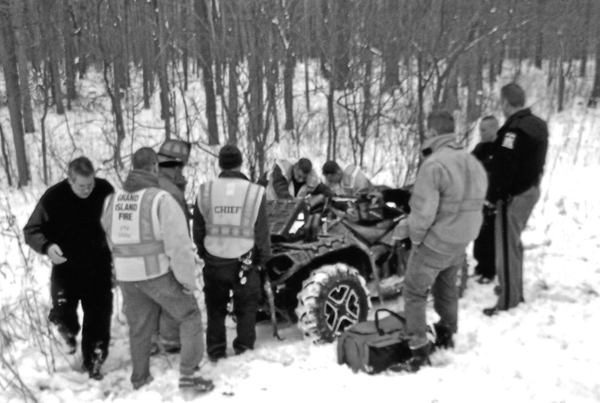 An operator of an all-terrain vehicle was removed from the ditch and readied for transport to a hospital Monday. (Photo by Ray Pauley)

The day started with a 6:15 a.m. mutual aid request from the Town of Tonawanda for a firefighter assist and search team during a firefighting operation at Roswell Avenue. GIFC units were relieved from duty at 7:44 a.m.

Subsequently, at 12:02 p.m., firefighters responded to a fire alarm activation at the Islandview Apartments on Baseline Road. It was determined that the sprinkler head in the front vestibule had burst due to sub-zero temperatures over the weekend, and set off a general alarm. The system was shut down temporarily pending repair.

Shortly thereafter, at 12:49 p.m., GIFC medics treated an assault victim on Bedell Road and she was transported to Millard Fillmore Hospital for follow-up medical attention.

Within the hour, at 1:24 p.m., GIFC rescue personnel responded to an all-terrain vehicle accident on Baseline Road near the crossover pipeline. Osinski stated that 20-year-old Paul Long of Grand Island was found lying in a roadside ditch next to his vehicle. He had apparently suffered a sudden medical episode, which led to the loss of control. He was stabilized by GIFC medics and transported by ambulance to Kenmore Mercy Hospital for further treatment.

Finally, at 2:34 p.m., GIFC personnel responded to a request for assistance from the New York State Police and found an untreatable cardiac victim.

Shortly before midnight Thursday, Feb. 11, Grand Island firefighters and medics responded to a report of a narcotics overdose on Carter Creek Drive.

When GIFC personnel arrived on location, they found an unconscious, unresponsive 34-year-old male lying on the floor, according to fire Capt. Dan Mathes. An intranasal dose of Narcan was administered and basic life support procedures were initiated. Shortly thereafter, he received a second dose, along with basic life support and advanced life support treatment, which was successful. He was then transported by ambulance to Kenmore Mercy Hospital for additional medical attention.

Fire Chief Matt Osinski shares the concerns expressed by the Erie County Health Department officials who note that over 200 drug-related fatalities occurred within the county during 2015. Such life-threatening heroin overdoses have reached epidemic proportions and are nothing new to the GIFC, according to Osinski. However, he sincerely hopes that the extreme risks involved will discourage more widespread drug abuse.