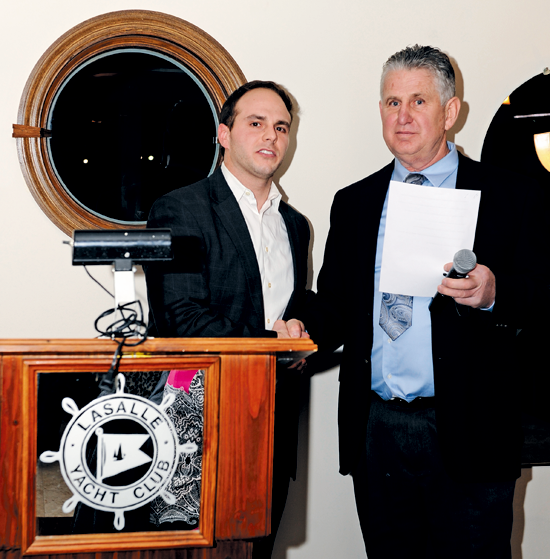 Restaino encourages businesses to be involved

Anthony L. Restaino, a 31-year-old attorney and partner at the law office of Restaino Reddien LLP on Military Road, was sworn in as the Town of Niagara Business and Professional Association's new president Jan. 27.

Restaino began his involvement with the TNBPA last spring after hearing more about it from his predecessor, Gary Strenkoski of Strenkoski Bros. Construction.

Restaino said he learned more about the general mission of the TNBPA, which includes promoting and improving the business climate in the Town of Niagara, as well as connecting businesses with local government officials and community members.

"I think that's the purpose of having the organization - to try and promote business in the Town of Niagara, but also be a voice for existing businesses. So, for me, that's why I thought it was important to join and I was interested in becoming an officer when I joined. I wanted to be able to have a voice and be involved," Restaino said.

Strenkoski introduced Restaino to the idea of possibly taking over as president.

"I'm exciting about him taking over because he's young, he's bright," Strenkoski said. "He's sort of new to the board. ... But when I talked to him, he seemed to be very enthusiastic. He wanted to know exactly what his duties were going to be," Strenkoski said. "He wanted as much information as I could give him on what my experience was of being the president of the organization. And he is very thorough - typical attorney."

Restaino said he was interested in becoming part of the TNBPA because of its involvement with the community.

"I guess the organization itself has a pride in the community and I guess the community, at large, has a pride in their town, in the area where they live, where they have their business," he said. "So with the some of the things ... that the organization does, whether it be beautification or, you know, charitable works - the involvement in the parade - and seeing that to be a success - the donations that they give out, I think it's important, not only for business, but for people in the community too. So it's giving back."

Restaino encouraged businesses to get involved with the TNBPA.

"Just since I've joined the organization, I've met a lot of people in the community that have different businesses here. So it's a networking tool for new businesses.

"I would say if there's any businesses in the town that aren't members - join. You know, get a chance to meet some of your neighbors here in the Town of Niagara, other business owners. And who knows, you might be able to collaborate on things."

Restaino said the business climate in the Town of Niagara has changed a lot, especially in the past decade.

"You know, we just had a mall and a couple stores. And now if you look to the south side of Military Road, you have the mall, the expansion of all kinds of retail development and plazas there. ... (At) the northern portion of Military Road - now you're seeing a lot more professional business, medical offices, all down this strip. So I think the business community is growing in the Town of Niagara," he said. "I'm a part of it now. You know, I like this location; plan on staying here for a while. So I figured it would be good for me to be involved in an organization that represents the businesses of this community."

As he begins his first weeks as president, Restaino said he has some ideas for the future.

"I think it would be valuable to business owners, but also people who live in the town to have some other types of different educational seminars on various different topics," he said. Last year, the TNBPA and local businesses helped bring educational opportunities to the community.

Restaino said he also wants to try and do more to help support the community.

Strenkoski said, "I think he's got different ideas, which is great. That's what I encouraged him to do."

Restaino spoke highly of Strenkoski, as well as the current TNBPA board members. He said he looks forward to working with them.

They've "done a tremendous amount of work and dedicate a lot of time to this organization that was founded 20 years ago," Restaino said. "A lot of people put a lot of time and effort into it."

Therefore, he said, "I guess my biggest challenge going forward would be to kind of pick up where Gary left off, try, you know, as a president, to carry out my duties to the best of my abilities and make sure that the organization continues to be strong."

The Town of Niagara Business and Professional Association honored both local businesses and community members at its annual dinner and awards ceremony Jan. 27 at the LaSalle Yacht Club.

TNBPA members, town officials and many others gathered to celebrate each honoree's commitment to the Town of Niagara with dinner, socialization and citations. 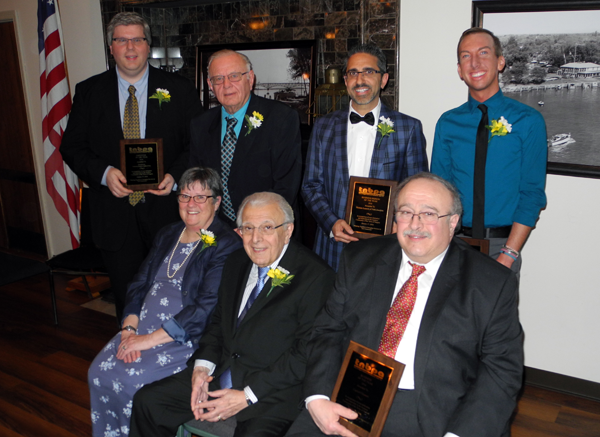 Back row, from left: Empower Executive Director Jeff Paterson, representing Employer of the Year; John Jesz, Citizen of the Year; Thomas Laurrie of Firth Jewelers, Business Person of the Year; and Jordan J. Toohey of Griffon Gastropub, Employee of the Year.

Front row, from left: Barbara Jesz, Citizen of the Year; and Joseph and Russ Petrozzi of Capital Cleaners, Business of the Year. (Photo by Marc Carpenter)