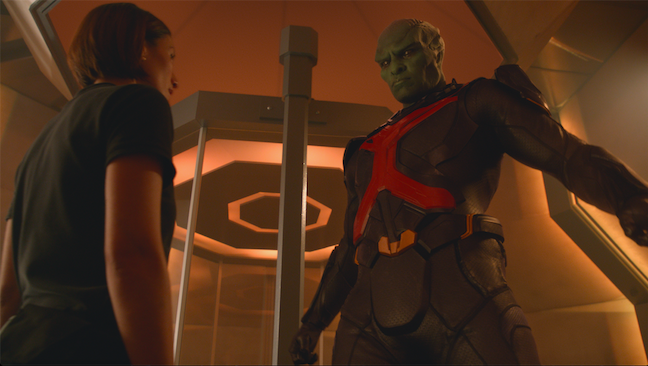 He is J'onn J'onzz, the Martian Manhunter. (CBS photo)

Once again, it's up to a stylish British actor to save the world.

This time, however, it isn't Daniel Craig's James Bond fighting off Spectre, but rather David Harewood's J'onn J'onzz shielding the populace from White Martians.

CBS' "Supergirl" doubled down on DC Comics lore recently, revealing Harewood's Hank Henshaw to be the Martian Manhunter. The 7-foot green giant has been likened to Superman in terms of his powers and empathy toward mankind, but, unlike the mild-mannered Kryptonian, J'onn J'onzz has telepathic powers and can shapeshift.

Until now, the card-carrying Justice League of America member has partnered with Kara (Melissa Benoist) in fending off threats originating from her lost planet. On Monday's episode, he will encounter malicious villains from his red planet: the White Martians.

In a phone interview Friday, Harewood said "Supergirl" is following the J'onn J'onzz comic book storyline wherein a fire has wiped out the Green Martians. He explained the White Martians committed "massive genocide," killing almost everyone.

"They just rounded us all up, and just burned us all," Harewood said. "You see that; you see where he gets his fear of fire from. You see why he's the last son of Mars."

J'onn J'onzz has vowed to protect Earth from extraterrestrial threats. As Hank Henshaw, he heads the Department of Extra-Normal Operations. Here, he works alongside Kara and her sister, Alex (Chyler Leigh), to protect mankind.

While they seem chummy, what viewers will soon learn is Hank is not just shielding J'onn's physical appearance, but his inner sadness and feeling of isolation, too.

"Everybody he knows has been burned to death," Harewood said. "On Monday, you'll see that. I think you'll see the depths of his fear, and I think you see how strongly he feels about the loss of his people. I think it will be a pretty emotional ride."

As Hank has helped Kara learn to be "Supergirl," so she'll help the Martian Manhunter learn how to be J'onn J'onzz.

Hank recently made a comment about how easy it was for Supergirl to come out to the world. Kara, he said, looks like a pretty, blonde cheerleader. While some might fear her strength, no one would cower at her appearance.

J'onn, meanwhile, is "pretty terrifying," Harewood said. "People are not going to tolerate somebody who looks as different as J'onn. I think he's very weary of it, but I think she ... provides him with valuable information about being different - which he'll act upon in future episodes."

Like his character, Harewood was cynical about how others would react to seeing a Martian.

"Personally, I had never heard of (J'onn)," he said. "(But) then they gave me all these comic books."

In the pile was a little green Martian Manhunter figurine.

Harewood saw it and feared "I'm going to be playing Shrek for the next four years."

Initially, he was worried, but "then I started to read about him, and I was just blown away by the depth of his backstory and his mythology. ... His powers are just amazing," Harewood said. "I was very excited that this great character had somehow fallen in my lap."

Well, just as Kara inspires J'onn, Benoist has been an encouragement to Harewood.

"I have to say, she is an absolute star," he said. "She's an absolute star. And she's not only the hardest-working actress ... in Hollywood right now, (but) she's in every scene, and she never complains. She never asks for a break. She's there every single day. She works harder than any of us. ...

"She's always got a smile on her face," Harewood said. "She's just a wonderful, wonderful actress; a wonderful person; and I just literally can't speak highly enough of her."

"I think she's been a real revelation. And I'm just really pleased to get to spend so much screen time with her," he said.

In addition to "Supergirl," Harewood recently shot the six-part AMC spy miniseries "The Night Manager." Here, Harewood shares the screen with fellow Brit Tom Hiddleston who, ironically enough, is a contender to play James Bond when Craig hangs up his PPK.

Fans can keep up with Harewood's work on Twitter @DavidHarewood. 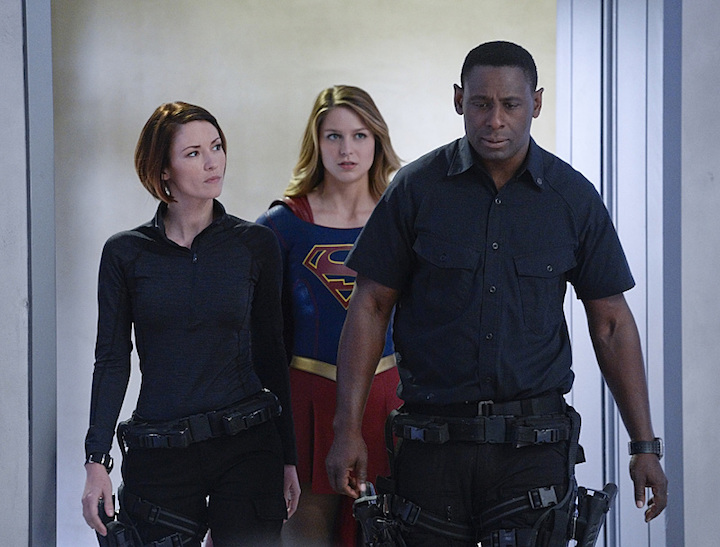