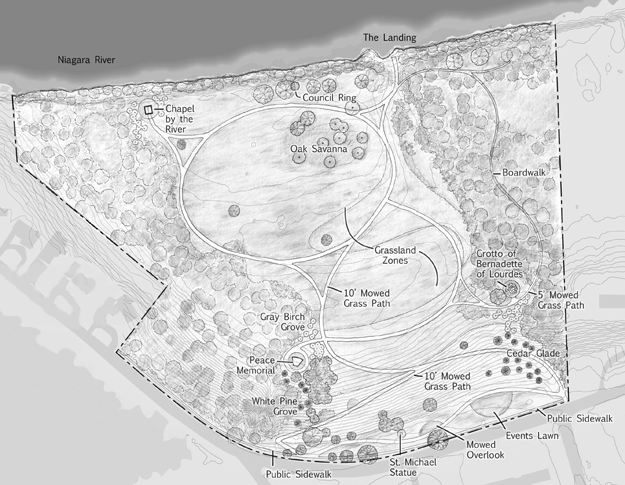 "It's art and ecology merging."

At an evening presentation held before roughly 100 people at the Lewiston Senior Center, Western New York Land Conservancy representatives unveiled both their vision plan and the concept plan for the preserve.

Included in the vision plan, which included input from the community, were such goals and objectives as protecting and enhancing wildlife habitat; providing public access to walk and hike; preserving the site's natural attractions; and promoting the preserve's rich history and natural resources.

"We are thrilled to showcase plans that integrate input from the community, with the creativity and careful considerations of a brilliant designer," said Nancy Smith, executive director of the WNY Land Conservancy.

Morrison went on to discuss the particulars for the 29-acre Stella preserve, which was formally acquired by the WNY Land Conservancy from the Sisters of St. Francis in July following a $3.9 million fundraising campaign.

The site had been under ownership of the Sisters of St. Francis since the early 1900s.

Morrison said elements of the plan will include a system of 10-foot wide curvilinear paths top to bottom throughout the sloping, riverside property, with a five-foot boardwalk to be located on the northern end. Pathways would lead downslope and meet at sites both north and south adjacent to the river.

The paths are to be designed to lead visitors through and around the preserve and provide viewing for its many distinct features of botanically diverse plant communities - including Eastern grasslands, grey birch groves, white and oak bur savannas, cedar glade, a sedge meadow and more.

"The design strives to provide a setting ... which celebrates a unique sense of place (and) derives from its rich and cultural heritage," Morrison told visitors.

Other elements of the plan include a gathering area for special events along with a scenic overlook to be located near the entrance to the preserve on River Road; maintaining and preserving such historical/cultural features as the chapel by the river on the preserve's southwest end; the Grotto of Bernadette of Lourdes on the northeast; and the peace memorial and St. Michael statue on the upper areas near River Road.

Morrison said work was expected to get underway on the site by spring.