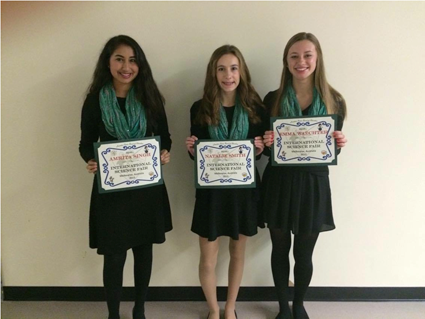 Three Lewiston-Porter students were honored at the Dec. 22 school board meeting for their research presented at the International Students Science Fair in Melbourne. From left, they are: Amrita Singh, Natalie Smith and Emma Waechter. The Lew-Port team placed second out of the 28 participating schools.

At the Dec. 22 Lewiston-Porter Board of Education meeting, many high school students were honored for their recent achievements in the fields of music and science.

Kevin Duncan, Lewiston-Porter High School music instructor, recognized in front of the board and those in attendance Tuesday night select students who performed in the local all-county and all-state music festivals.

James Burritt, also a music instructor at the high school, noted how grateful the participants and teachers were for the board's support, financially and in other ways.

"The area all-state festival takes place on the campus of SUNY Fredonia. We have always stayed overnight on a Friday night into Saturday, and that's always been supported by the Board of Education and Lewiston-Porter budget," Burritt said.

"We've been so fortunate that every year we have sent kids to the all-state level. We're one of the longest-running programs, consistently (in attendance) every year," Duncan said.

Michelle Hinchliffe, a chemistry instructor at the high school, acknowledged the International Students Science Fair 2015 participants from Lewiston-Porter. The team of Amrita Singh, Natalie Smith and Emma Waechter placed second at the event out of 28 schools, covering 18 countries. Lewiston-Porter has attended the ISSF since 2011.

The fair was held from Dec. 6-12 in Melbourne, Australia, at John Monash Science School. The three students and their supervising teachers, including Hinchliffe and Colleen Glor, collaborated with Dr. David Stewart and Lauren Lubecki of D'Youville College in the research. Stewart and the research team working with the Lew-Port students were awarded a $2,700 grant to extend this project.

The Lew-Port team had been testing to determine if zebra mussels exposed to different concentration levels of lead ion will exhibit different levels of lead ion retention in tissue and shell over a six-week period. They were responsible for fielding questions about their research as well as a 10-minute presentation.

All three students explained the hands-on activities that they were a part of during their time at the fair. Singh explained that they looked at DNA from tapeworms, for example, and learned how to sequence the DNA.

"It was taking what we have learned in school, in biology class, and bringing it to life," Singh said.

Superintendent Paul Casseri gave certificates to Singh, Smith and Waechter and their teachers, honoring their accomplishments.

"Our goal some day is to eventually host. We're a great location, with one of the seven wonders of the natural world right in our backyard," Casseri said.

Lew-Port was the only public school that attended as an official member of the ISSF and was one of only three institutions attending from the United States.

The next Lewiston-Porter Board of Education meeting will be at 6 p.m., Jan. 26, in the Community Resource Center.