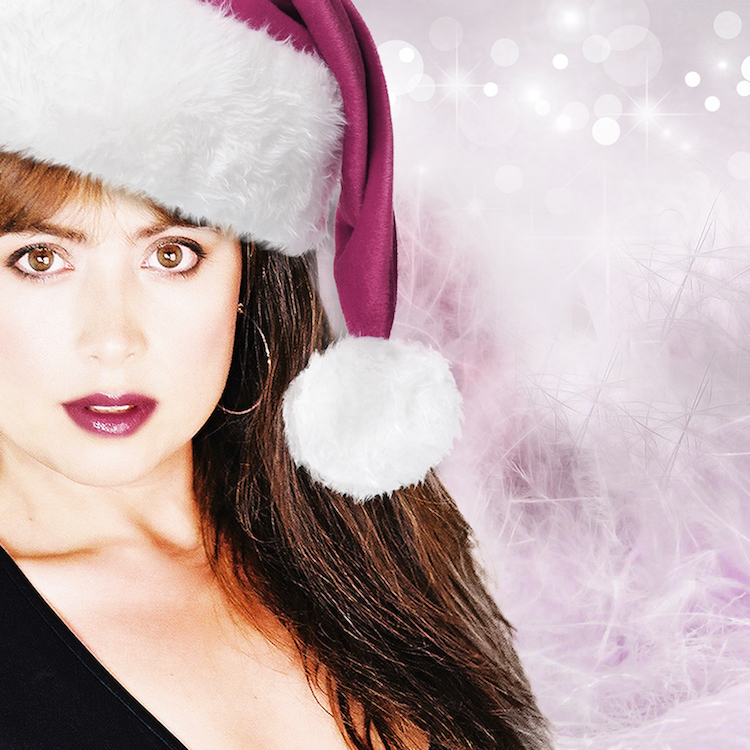 It's the most wonderful time of the year.

That is, of course, unless you have the flu.

"I haven't been this sick in 10 years," Lisa Dawn Miller said in an interview Wednesday. "It's unbelievable."

Even though she's barely slept in three weeks, Miller is pressing forward with this phone call; a holiday version of her popular live show, "Sandy Hackett's Rat Pack," of which she is a producer and performer; and the release of a new Christmas EP.

"I think, when you're working on a successful project, and you're working with creative people, that, in order to keep the momentum going, you have to keep creating," she said.

To that end, Miller recorded and recently released "It's Christmas" and the aptly titled "My Favorite Time of Year."

The songs are available on iTunes - which is ironic, as Apple is showcasing her father's words in a new commercial. Ron Miller's song, "Some Day at Christmas," is the backdrop of a holiday greeting starring Stevie Wonder and Andra Day.

"I learned from the best, and I'm aspiring to be as good as him one day," Miller said.

Though she lives in Los Angeles - far from Santa and even farther from snow - Miller cherishes the holiday season, and wanted to inspire others the way her father did with "Some Day at Christmas."

"If you listen to the lyrics of that song, even though it's written in the theme of Christmas, it's really about hope for a brighter day for all time," she said. "It's about some day at Christmas we see a place where people love each other and people are free. But it's really about all time.

"And I think, for me, Christmas is always where my family is - so we could be on a beach in Hawaii or in the snow on Christmas. To me, it represents Christmas, and being together, and that feeling that you have when you're with the people that you love.

"That's what my song, 'It's Christmas,' is about - and also 'My Favorite Time of Year.' I wrote that selection from my own experiences with my family."

Miller has no shortage of material to draw from on that front. Her father, of course, was a wildly successful songwriter. Her son, Oliver, is making a name for himself as a singer (he's performed alongside Stevie Wonder), and her husband, Sandy Hackett (son of the legendary Buddy Hackett) is the one who nudged her back into performing after a break.

"It was always in my heart; it was always my passion; but I became a stockbroker and I worked my way up to first vice president of Morgan Stanley," Miller said. "I kind of had what they call the 'golden handcuffs,' where it was hard to walk away, because I was very successful as a stockbroker. I was a young stockbroker in probably ... one of the greatest bull markets this country has ever known. And it was hard to walk away from that."

"When I met my husband ... he said, 'You know, you really have to get back to your music,' " Miller explained.

Working alongside him, and her longtime producing partner Mark Matson, she brought four of the most famous performers of all time back to life (for one night only).

"It's a fun show," Miller said of "Sandy Hackett's Rat Pack Show." "It's a recreation of what would it be like if Frank, Sammy, Joey and Dean were still alive. God sends them back to do one last show. The voice of God is portrayed by my father-in-law (Buddy Hackett), who recorded the voiceover before he passed away. ...

"My husband plays Joey Bishop in the show, and he's hilarious. He's very, very funny. There's a lot of comedy in the show."

Audience members can expect "All of the classic songs that people would know and recognize from 'The Rat Pack,' and also there's some original songs written by my father that we discovered after he passed away," Miller said.

"You laugh and cry and have a great time," Miller said. "I think we've been to the Bear's Den at Seneca Niagara once, and we were also at the Events Center I think twice. And that audience loves the show. We always have a great time."

In the meantime, "I'm getting ready to release the other songs - the non-Christmas songs - in about 10 days, and I'm really excited about that," Miller said. "My new CD is called 'Hello You,' and it's all original songs."

Fans can listen to and buy Miller's music, and find out more about her "Rat Pack," online at http://www.lisadawnmiller.com/.