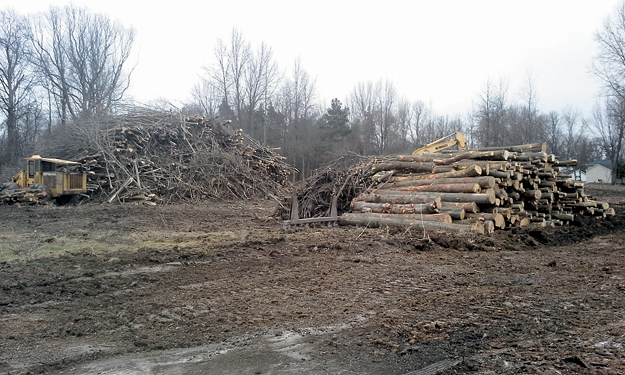 "A group of residents who attended the (Monday Lewiston Town Board) session realized that the full board met with the developer, Jerry Wolfgang, and his attorney, Damen DeCastro, right after the executive session that was convened to talk only about police personnel issues," the resident said.

The Sentinel contacted Town Clerk Donna Garfinkel this week to inquire on what happened Monday. She was unable to provide any details.

As far as French Landing, the town approved a modified final plat in September. It provides for completion of the Wolf Run roadway loop connecting from the River Walk spur on the northeast to Lower River Road on the southwest. It also addresses a long-standing fire-access issue at River Walk that is to be completed by the River Walk developer.

Garfinkel was asked if the town issued a public improvement permit for the tree cutting/land clearing. She replied none had been issued as of Thursday.

Following unsuccessful inquiries to Town Building and Zoning Inspector Tim Masters and to Town Engineer Bob Lannon of Conestoga-Rovers & Associates, the Sentinel contacted DeCastro, who offered a full clarification on what was going on.

"We're out there clearing it up, to set the stage" for future work, DeCastro said.

He said the tree clearing was a first in a multistep process toward eventual construction of the Wolf Run roadway loop. "Jerry's prepping the site; there's trees that needed to be removed prior to the road staking."

DeCastro said he and Wolfgang met with Interim Supervisor Ron Winkley and the Town Board Monday for purposes of updating them on the project.

As far as issuance of a PIP, DeCastro said one is expected to be issued by Lannon, who is overseeing inspections of the tree-clearing and road-staking activity once that work is completed.

The French Landing developer submitted a $53,000 deposit to the town to cover the carrying out of inspections. DeCastro said issuance of a PIP requires on-site inspections overseen by the town engineer.

"We're working on the scheduled improvements" that will ultimately see the installation of sewer and water lines en route to completion of the roadway, DeCastro said. It's a $1.5 million project funded completely by Wolfgang that would ultimately become a dedicated road fully owned by the town.

"Nothing is free," DeCastro said. He added that, in addition to all the roadway costs, Wolfgang is also paying recreation fees to the town associated with the development.

"The town has not spent a penny on this project," he said.

As far as progress, DeCastro said trees are being removed, with staking and further road preparations still to come. He said the work is weather dependent, and added, thus far, crews have encountered no drainage problems in the area whatsoever.

"The water there is very dry," he said.

In news from the session:

•Town grant writer Bernie Rotella informed the board he was in the process of pursuing grant money to assist Lewiston Police Department needs, water meter replacements and unspecified capital improvement items. More information is expected either at the board's Dec. 28 regular meeting/final audit session or next month.

On a related LPD item, the board approved a $70,000 account transfer from police personnel to the police equipment line. It allows for the LPD to acquire a new patrol car, replacing a 2009 vehicle with 122,000 miles. It also provides for new department equipment purchases.

He sought and obtained board approval for payment of replacement parts for the damaged warming house tent, and said claims are being submitted to the rink's insurance carrier for reimbursement.

For more information on the rink's hours of operation, visitwww.LewPortSports.com.