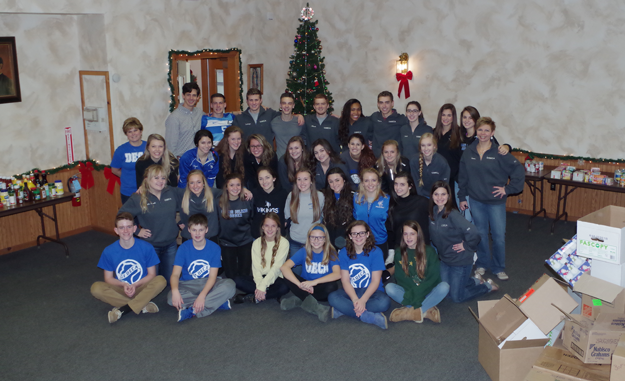 Sixty-one families on the Island will have a little brighter holiday season thanks to their generous neighbors.

Members of the Neighbors Foundation, Knights of Columbus Mary Star of the Sea Council, and students from Grand Island High School and Connor Middle School gathered Thursday at the council hall to sort nine pallets of donated food and re-package it for later pickup by Islanders in temporary need. The work was done for the annual Neighbors Foundation food drive, an Island practice since 1973.

Denny Dahl, vice president of the Neighbors Foundation (www.gineighbors.org), said the organization was supporting 100 people in 61 families this holiday season. 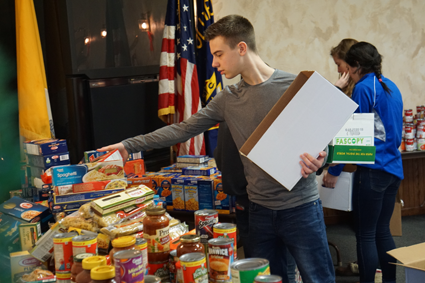 Josh Schaefer, DECA member, was one of 33 students from the school district to volunteer for the Neighbors Foundation at the Knights of Columbus Mary Star of the Sea Council hall.

In addition to 10 Neighbors Foundation volunteers, there were 33 students from DECA, JV DECA from Connor Middle School and Student Council, and other organizations who bused to the Knights of Columbus Mary Star of the Sea Council hall to sort the donations and package them for pickup. Students made quick work of the process, which used to take foundation volunteers hours.

Lisa Pyc, president of the Grand Island Board of Education, pitched in to help for the first time and saw the process first-hand. It was an eye-opener.

"It's just outstanding to see the amount of food that's collected from all the schools, and then these students separating it," Pyc said. "I didn't realize it's for Grand Island families. I didn't realize there's this huge process at all."

"You see food dropped off as a mom, I send food in to the school with my kids, and then you don't know where it goes," Pyc said. "To see it come together, separated and then broken down for families, it's amazing. It's heartwarming."

"To this degree, as it continues to grow, I think we get more food, more students involved, and it just speaks to how we work with the community," Pyc said. 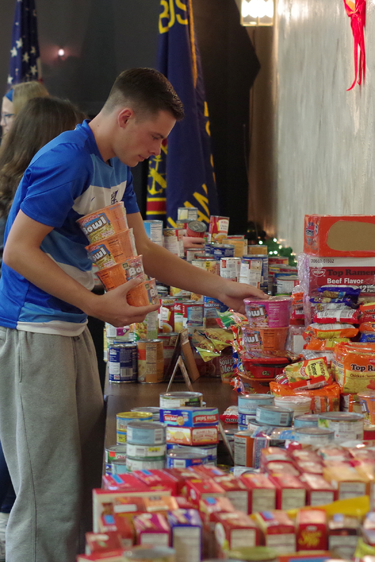 Tom Stedman of the Grand Island boys varsity soccer team sorts food donated by fellow Islanders for others in need.

Chamberlain said DECA and Student Council students went into neighborhoods on the Island and "pounded the pavement" seeking food donations by reaching out to the people in the community.

Grand Island High School DECA secretary Cassidy Siebert was making her second trip to the Knights of Columbus this year to sort donated foodstuffs. Rather than dread what some people would consider a heavy workload, Siebert looked forward to the opportunity to pitch in and help.

"No, I enjoy it," Siebert said. "It's just nice to work with all my peers and help the community."

"I think it's just a great atmosphere. We're all having fun working together and doing what we can to help out, and we're getting to see different parts of the Island perhaps that we wouldn't be able to," Siebert said.

"It just shows that Grand Island's aware of what's happening and we're willing to help whoever we need to, and the school district is really involved, especially our clubs like DECA and Student Council," Siebert said.

Students who volunteer to work learn a valuable lesson that they can't get from a book or a classroom lecture. The volunteer work provides a teachable moment for students, Pyc said.

"And that's just a life lesson how to give locally to your own community," Pyc said.

"This says it all. Look at all the food."

Click below to see a time-lapse video of the 2014 food sorting: