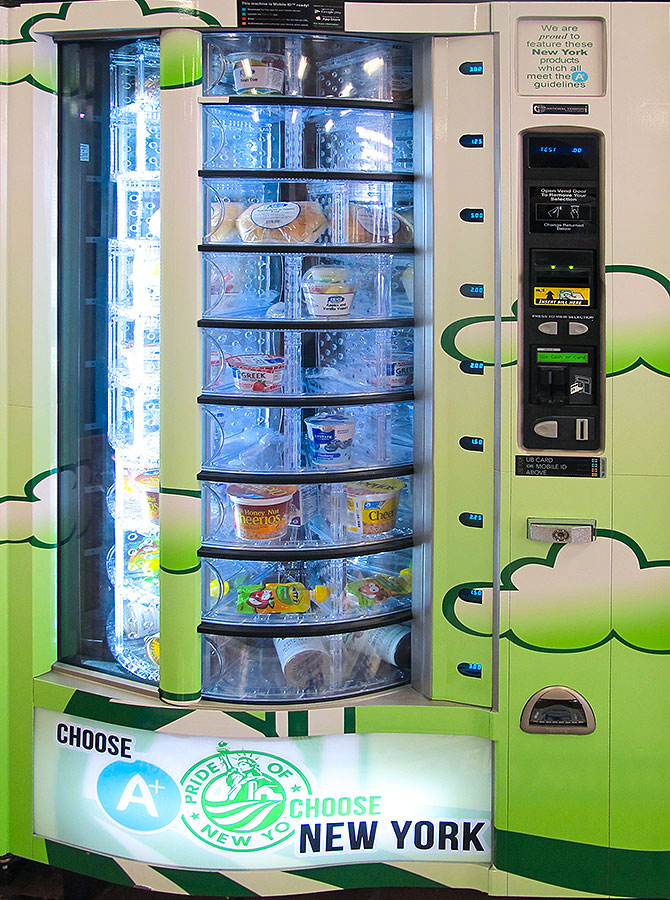 The University at Buffalo installed four new Pride of New York vending machines, each stocked with healthy products made or produced in New York state.

UB takes a bite out of the Empire State

It's a scene that plays out countless times each day on college campuses everywhere: Hungry students make a pit stop at a vending machine for a quick snack before rushing off to their next class, job or the gym. But at the University at Buffalo, the hurried hungry can choose products that support a healthier lifestyle and the local economy.

Campus Dining and Shops rolled out four new Pride of New York vending machines at the start of the fall semester, each stocked with items made or produced in New York.

There are three vending machines on UB's North Campus - in Alumni Arena, on the second floor of Capen Hall and in the Natural Sciences Complex - and one in Kimball Tower on South Campus. Sales from these New York-themed machines have been solid, according to Campus Dining and Shops vending manager David Marotta.

"We've received a lot of great feedback on them, especially the one in Alumni Arena," Marotta said. "Everyone wants a peanut butter cup every once in a while, but people are definitely looking for healthier options in the snack machines."

Items available in the machines, and where the products are made or produced, include:

The machines also include "grab 'n go" sandwiches, veggie cups and hummus with cheese and crackers, all produced in the Campus Dining and Shops commissary.

The Empire State-focused vending machines are an extension of Campus Dining and Shops' support for Pride of New York, a program sponsored by the state's Department of Agriculture and Markets that promotes the sale and support of food grown and processed in New York.

"We've been promoting the Pride of New York campaign here at UB for the last eight years in an effort for our customers to easily recognize products that are produced locally or within the state," said Raymond Kohl, Campus Dining and Shops marketing manager.

"Our students, faculty and staff are very interested in knowing where their food comes from and love knowing that we source many of our ingredients from local farms and businesses across New York," he added.

The Pride of New York machines also coincide with Campus Dining and Shops' Smart Choice A+ program. Most vending machines include a row of healthier choices, such as granola bars and protein bars, all marked with an A+ symbol.

"We want to provide great-tasting snacks and beverages that will not only help our customers stay focused and energized, but are better for them," said Jeff Brady, executive director for UB Campus Dining and Shops.

Marotta will evaluate the Pride of New York vending machine concept at the end of the academic year, but anticipated expanding it to more parts of campus based on the early success.

And there could be other exciting developments in the world of snacking on campus. Marotta recently stocked a few regular vending machines with snacks from a local Indian food store. In the future, he'd like to test international-themed vending machines that offer snacks native to different countries, such as China and India.

"UB has such a diverse campus that I can see something like that working really well," Marotta said.