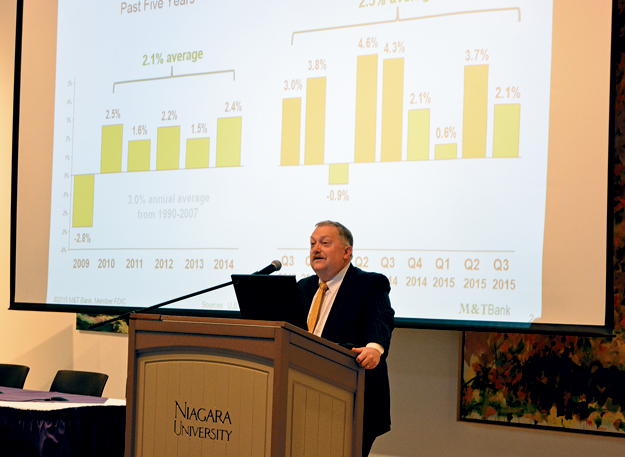 Vice President and regional economist at M&T Gary Keith addresses the crowd at "Economic Vision 2016 and Beyond: Creating a Vibrant Future."

A presentation and panel discussion, "Economic Vision 2016 and Beyond: Creating a Vibrant Future," was held Tuesday by the Niagara USA Chamber of Commerce and Niagara University at the Castellani Art Museum.

Gary Keith, vice president and regional economist with M&T Bank, was the keynote speaker. He touched on several points on the U.S. economy, such as gross domestic product growth, personal consumption spending and other income and employment related topics. He also mentioned the Western New York economy. The bulk, however, of his presentation was on the economic trends, progress and challenges of Niagara County.

"A number of things are working for us - tourism, retail, hospitality, business services. But the sobering reality is the manufacturing part of our economy is under stress still," Keith said.

Keith said the big question is - how will the workforce grow?

"Downsizing of the labor pool in Niagara County is a fact," Keith said. "We have an aging population that will be leaving the workforce."

"If we don't grow our workforce, the economy is going to be a very difficult aspect to go forward from here," Keith said.

He explained jobs can be created and become available, but if there is no one to fill them, the economy will not grow.

Keith stressed the importance of local leaders and members of the community, discussing how the county can help grow the workforce. "If we continue to roll up our sleeves and continue to work hard at the challenges we have in front of us, I think we can continue to make solid progress," he said.

Keith also compared the growth paths of Niagara and Erie counties. Not only did Erie County recapture the jobs lost during the main stages of the recession, as Niagara County did, but it also contributed additional jobs.

With that, Keith said the "depth of the recession" in Niagara County was significantly more profound than that of Erie County.

"Difficulty recovering what you once had, has been a big part of the last several years' story. The downturn we saw at the national level is pretty much what we've seen here in Niagara County," Keith said. "Erie, on the other hand, (had a) much shallower decline - a much easier glide path to get to growth. We want to emulate a little more of that type of behavior."

Keith explained most of Niagara County's performance has a lot to do with "our industrial legacy and the pain of transforming ourselves from that legacy to where we are headed into the future."

Keith referred to the 200 jobs lost resulting from Chemours (the former DuPont plant), closing on Buffalo Avenue in Niagara Falls.

"There's no question that's (loss of manufacturing jobs) been very painful for a number of households in the county ... for the past several years. The decline in well-paying manufacturing jobs, and the ability to participate in the economy because of that, has been a mighty drag on Niagara County growth," Keith said. "So great has been the manufacturing downsizing that it's pulled the entire county private sector income level below water, which is again a challenge relative to what we see next door in Erie County - relative to what we see at the national level."

Despite the challenges set for Niagara County, some positive aspects were addressed, as well. For instance, employment has seen a 7 percent increase on an inflation-adjusted basis in Niagara County, which tops the U.S. average of 6.4 percent.

To build on the success in Niagara County, Keith suggested concentrating on "developing our assets."

Niagara Falls, for example, has been resource as Keith described, to Niagara County for over 100 years.

Waterfront access was also brought up as a benefit that should be focused on.

Keith said, "Reshaping our economy in terms of other industries that aren't necessary - those that have been long-term associated with the region," is also very important.

For instance, Niagara County derives a large portion of its economic activity from the education and medical sectors. Its growth is higher than that of Erie County.

Keith stressed the "economic landscape," of Niagara County is changing from the historical industrial, manufacturing legacy to a more service-based economy.

"As we transition to a more service economy, a more knowledge-based economy, the work force has to be able to have the skillset that employees need. And training and education is a part of that," Keith said.

"I think we would all agree that higher education institutions play a critical role in revitalizing our economy," said Deanna Alterio Brennen, president and CEO of the Niagara USA Chamber.

"We (NU officials) see ourselves as a catalyst as a university with teaching service and research to bring people together, to germinate ideas, to develop ideas and to help implement them," NU President the Rev. James J. Maher, C.M., said. "It's really important to stress that, for the future success of the region, which all of us care about, our students - tomorrow's workers - have to be prepared to enter and thrive in the workplace."

In addition to the general economic overview, one of the topics discussed by the panel, made up of Niagara University professors and active business members of the community, was how Canadian dollars will affect Niagara County's economy.

"Where Toronto goes and Canada goes, so does Western New York," Keith said. "We're talking about a world-class, global-class economy 60 miles away from us. No matter what, through thick and thin, that area is going to grow. The more ties we have with that area the better."

Although the Canadian dollar has made it less appealing for Canadian shoppers to cross the bridge to shop in Niagara County in the past year, Keith does "not expect that, in the long term, the integration will be derailed in any way."

Jay Walker, an assistant professor of economics at Niagara University, said the Canadian tax policies keep Canadians coming over to Niagara County to shop, due to lower costs for clothing and food items. "So, even with the difference in the dollar, I think we will continue to see people. It just may not be in the same amount," he said.

Keith recommended the county encourage Canadians to spend more than one day in Western New York, as well as partake in various events and utilize offered resources to "keep those dollars stickier, rather than simply making the quick trip to get a bargain."

Another hot topic on how to improve Niagara County's growth was immigration.

"We can't put up a wall. We have to open doors. I think there's a lot of talent in the world. We should be open-minded with what that talent can do for us," Keith said. "If we look to our northern neighbor across the river that's been very open to absorbing new immigrants into its economy, it has been the benefit of that."

"Since this country has been around, we've had a steady inflow of immigrants that have become part of the economic chain," said Rocco Surace, partner of The Bonadio Group.

"We can learn a lot from Canada. If you look at Toronto ... it's one of the top five cities in the world. It got that way through immigration," Calamar Chairman and CEO Kenneth Franasiak said after the panel discussion.

"If you looked at the roots of Toronto, they focused on inward-bound capital and also certain technologies and skillsets, and that's really what built it - the financial district, the technology district, the advanced manufacturing business."

Franasiak explained that, due to Western New York's close proximity to Toronto, Niagara County and the surrounding area, it needs to focus more on immigration policies that can drive skilled workers to the area. "I think the immigration policy should be clear-eyed. It should be focused on what those immigrants could do for us and building on that talent as opposed to fear," he said.

Overall, Keith said "We've preformed much better than in our history and that is the new vibe that's going around the Western New York area in terms of cranes in the sky, activity levels - we're feeling it, we're seeing it, it's happening."

"The growth in GDP in the Buffalo area has been consistent and what's more encouraging is we've outperformed other metropolitan areas in the country over the last several years. There are very few times I get to stand in front of an audience and say the Buffalo area statistics top the national norm," Keith said.

Keith said that the area has done very well in GDP, which is critical. He said this was accomplished by transforming the economic base and "the new industries we are building around to reshape our future."

"Our economy today looks much more like the rest of the country than it has historically," Keith said. "The historic legacy of Western New York around industrial strength has also been a weakness in times when manufacturing has been under stress. We have gone backwards, while the country as a whole has moved sideways or moved ahead. We are now performing much more like the rest of the country ... and the benefit of that turns up in something we can all relate to - job growth."