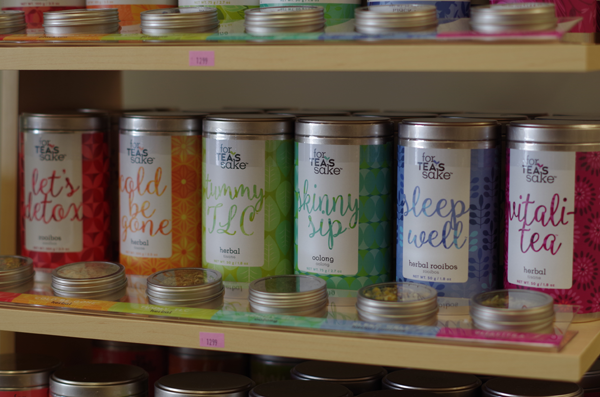 For Tea's Sake is a new offering at Pink Martini Gift Shop. (Photos by Larry Austin)

Diana Nobumoto said she can't believe it's been a year since she opened Pink Martini Gift Shop in the Grand Island Plaza.

Nov. 7 she celebrated the first anniversary of her first business that began in July of 2014 almost spontaneously. Nobumoto said she was looking for something to do once her youngest daughter graduates from Grand Island High School this year, and a chance encounter led to the new avenue in her life. Working on the high school music boosters' school calendar fundraiser in July of last year, she stopped in the gift shop to offer owner Pam Gallagher an opportunity to advertise. When Gallagher said she was planning to close, Nobumoto couldn't accept the news. She wouldn't let the location go without a gift shop that had been there for about 20 years.

"I went home and I just thought about it and it just seemed like the right thing to do," Nobumoto said of taking over the gift shop. After some thought and research, she went back to Gallagher and worked out a plan to acquire the business in October.

Though she had a long track record of volunteering with the school as a music booster, she had never before run her own enterprise.

She closed for a month to remodel and then opened Nov. 7 "in the middle of the holidays. Had no idea what I was doing. It was like a whirlwind. January came and I thought, 'Well, if I got through that, I'll get through anything.'"

The gift shop is more than just a business for Nobumoto.

"It's all the things I like to do," Nobumoto said of "the decorating and the fussing" involved in merchandising. But most of all, she said, "I like to be with people." People don't come to shop at her store, they come to socialize, she said, making the business not so much a labor, but a pastime.

The name of the store reflects Nobumoto's passion for music, jazz in particular, and has nothing to do with alcohol. Pink Martini is the name of one of Nobumoto's favorite bands, who often grace the store's audio system. Listening to one of the band's CDs in the car one day, the thought of naming the business after the band struck a chord.

Pink Martini Gift Shop also reflects its Grand Island roots with Island merchandise, such as the Vegetabowls ceramic bowls line owned by Islanders; and a candle line with scents named after Island locations, such as Sandy Beach, Ferry Village, Fantasy Island and Buckhorn. Nobumoto said a popular new item is a tea line - For Tea's Sake - that just came in this month, and its Wind and Fire line of bracelets. 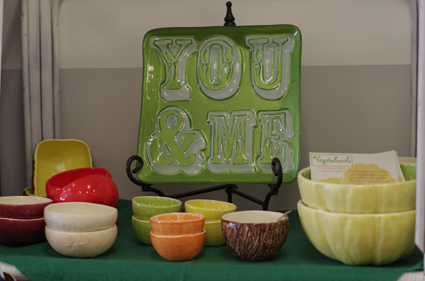 Vegetabowls, a local company, is a line offered at Diana Nobumoto's gift shop. 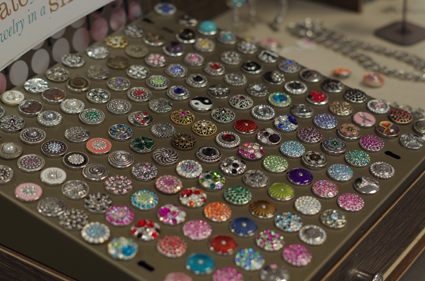 Ginger Snaps jewelry is a popular line at Pink Martini. 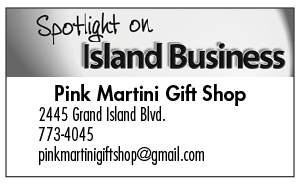