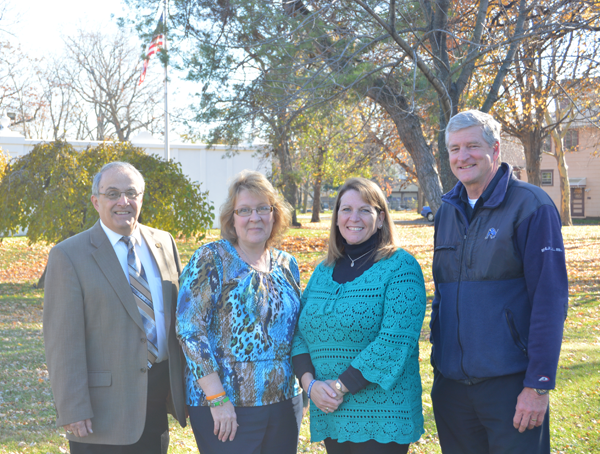 A special project is underway in the City of North Tonawanda - one that will provide a peaceful place for family members who have suffered the incredibly heartbreaking loss of a child.

The idea was presented to the community by North Tonawanda Mayor Arthur G. Pappas earlier this year after he and his wife visited the Children's Memorial Park in Lockport, which helped inspire their idea of the Children's Remembrance Gardenwalk at Brauer Park.

"Several years ago, my wife and I were both teachers. She had (taught), in the primary level, two children that were killed in a tragic accident in Canada, and that always stuck with her. And she had mentioned back then and throughout the years that, 'You know, it's too bad there isn't something remembering these kids, this situation - the children you lose in the community,' " he said.

Pappas explained that when he and his wife heard of the park in Lockport, they went to see "just want it was all about."

"We stopped to look at it and see just what this was all about and how they did it and we were thinking, 'What a nice idea for a community, and why can't we have one in our community?' ...

So we thought, well, if we can do something like that in North Tonawanda, we would be not necessarily copying, but taking on a good idea and spreading it," Pappas said.

From there, he decided to reach out to those affected in the community in hopes of attracting a group of people to help plan a site to remember children.

"The concept is something that we thought would be really nice, so we did form a committee of interested people, basically people who have lost a child," he said. 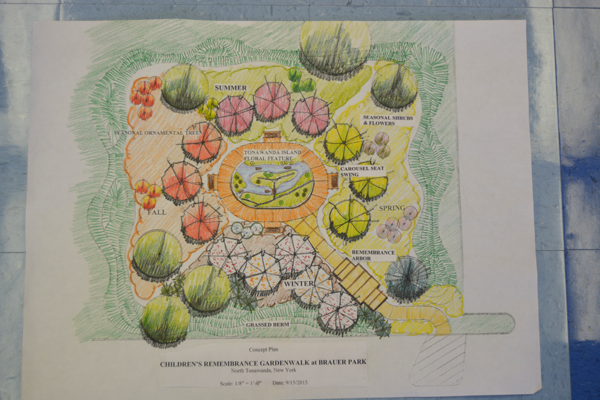 Shown is a photograph of the preliminary rendering of the Children's Remembrance Gardenwalk at Brauer Park by landscape architect Frank T. Brzezinski.

Co-chair of the garden walk committee Paula Benedyczak was one of the first to receive word of the project and immediately got on board.

Benedyczak's son, Jordan, passed away at 16. To help keep his memory alive, she began Jordan's Journey, a nonprofit organization.

Jordan's Journey has raised money for new batting cages for the North Tonawanda Little League, as well as local school scholarships and more.

"I was part of the ribbon-cutting ceremony for the new batting cages, and Mayor Pappas was standing right next to me. ... Well, sure enough, he said there was something he was working on and that he would contact me," Benedyczak said.

And that's exactly what Pappas did.

MaryBeth Kupiec, the other co-chair of the garden walk committee, said the mayor also publicized "a couple families who were looking for a place to memorialize their children."

She then contacted the mayor and became involved. "I thought it would be great. Unfortunately, North Tonawanda has a very large population of deceased children," she said. "It (the committee) was pretty small the first time, but then Mayor Pappas asked us to go out and see if there was anyone who would be interested, and so we did."

"You never hear about it and then something like this happens and you just really find out how many people have lost (children)," Benedyczak said.

Once the committee of about a dozen or more members was formed, the location of the park became one of the first topics of discussion.

Pappas explained Brauer Park was one of the suggested areas and everyone seemed to support it.

"It was just a suggestion, because it's a nice, serene area and very underutilized, and it's right behind the Veterans Memorial from WWII," he said.

"We looked at different sites for where else we could do this, local sites, and I think we focused on this because of its proximity to City Hall, the foot traffic it would get - because there's a lot of activity here," said City of North Tonawanda Engineer Dale W. Marshall.

Marshall also explained the site is located just opposite the historic Sweeney Street cemetery, which marks the resting place of several children and infants from the mid-1800s.

"Everybody lost children, because they didn't survive. Medicine wasn't what it is today. So there's a lot of babies buried there; so it made sense that we have that sort of spiritual thing going on there," Marshall said.

Both Pappas and Marshall also pointed out the location at Brauer Park is very close to a nearby playground, as well as the Herschell Carrousel Factory Museum.

"It really got us thinking children and fairs and things like that, so it seemed like the right place to put it," Marshall said.

"It's near the other memorials and, when you see it, you can just see that it's very peaceful. ... I think it's a perfect spot," Benedyczak said.

"The committee was 100 percent behind that location after putting these pieces together," Pappas said. "Now we have started and have gotten several people interested, and the people are already talking about donations and volunteering. We want to keep this rolling. I don't want it to become something talked about, but never accomplished."

A preliminary rendering of the park's design has been completed by local landscape architect Frank T. Brzezinski. "I'm a North Tonawanda native and the city is dear to my heart," Brzezinski said. He explained that at this point in his career he is looking for projects where he can help groups, organizations and municipalities with some "really creative projects."

The gardenwalk is planned to consist of an arbor that will create an entrance to the walk area. "You have to go through a portal to get into it, because we want you to go in and contemplate and sit down and relax and remember," Marshall said.

The plan is to carve out about two feet of the land, to make the walk area sit below ground level.

The details have not been laid out yet, but community members will be able to purchase a token in memory of a lost child, whether it be a brick or a plaque to run up the sides of the pathway.

The area will contain four different sections of foliage, each blooming in one of the four seasons. Therefore, one section will bloom during the spring, summer, fall and winter.

There will also be a pollinator garden to attract birds, bees, butterflies and other insects.

Four park bench swings will be installed for visitors, as well. "We started thinking a swing set is something that is a childlike thing, but adult swings that people who lost the kids can swing on ... similar to the ones in Lewiston where the Silo is," Marshall said.

One of the ideas for the swings is to have wooden carved carousel figures on either end of the bench. "It's a children's thing, but it's an adult thing," Marshall said.

Pappas described the design as creating a "contemplative atmosphere" for visitors.

"I don't want this to totally come from me; I want the community involved," Pappas said. "In the meantime, I really would like to get the project off the ground."

The project is estimated to cost approximately $30,000 or more to complete.

"The design is there and almost everyone is unanimously thrilled with the design," Kupiec said. "We have all winter; we can do fundraisers and, hopefully, we can make this happen in the spring. That would be wonderful."

"It would be nice if we could construct this by next year, but we've got a progressive design and the group has got to sell that idea," Marshall said. "Typically something like this takes more than a year, like two."

There are many ways members of the community can contribute to the garden walk, including donations of time, labor, funds and even a tree or another valuable addition.

The group has already started connecting with members of the community.

For instance, Kupiec has reached out to Orleans Niagara BOCES in Sanborn, where her son, Brandon, attended the welding program. His fabrication instructor, Steven Frey, along with his students, has offered to build a sculpture for the garden walk.

"They'll be benches that are near the sculpture that people could just sit there and commemorate their loved ones and enjoy the environment," Brzezinski said.

"We already have them (Frey and students) on track," Kupiec said. "It's just we are really excited about seeing it all come together."

The committee plans to meet again this month to discuss further action for the garden walk. Anyone who wishes to donate or contribute to the Children's Remembrance Gardenwalk can contact the major's office at 716-695-8540.

"For as small as we are, our little North Tonawanda community, we really, unfortunately, have lost a lot of our children. So now, to all come together - I think it's going to definitely show that the community cares, and cares for the lost children in North Tonawanda," Kupiec said.