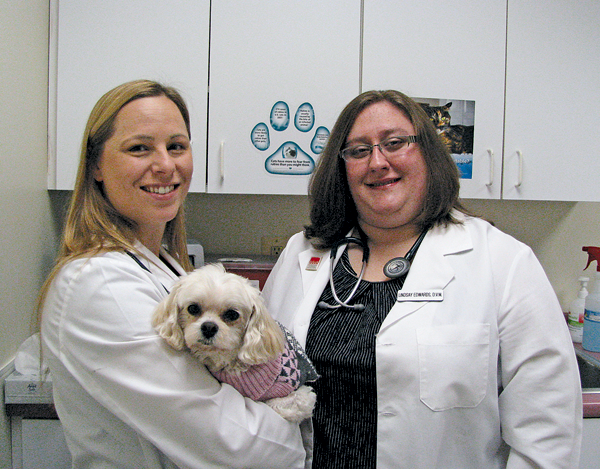 Phyllis up for adoption

Everyone has heard stories of actors being "discovered" in unusual spots.

Lewiston has its own new star discovered, in of all places, at the Lewiston Animal Hospital.

Phyllis, an adorable, sweet-natured Shih-Tzu mix, got her big break when she was noticed by the Choice Films crew while they were scouting potential locations recently for the movie "Morning Sun."

Phyllis' rags-to-riches tale is a truly heartrending saga, ranging from abandonment to a possible death sentence. Now, the veterinarians and technicians, who have fallen in love with the 4-year-old pup, are hoping to find her a good forever home when her acting days are done.

Drama entered Phyllis' life when she was left at a local animal shelter. She was determined to be unadoptable, because her entrance exam revealed several small nodules in her mammary (breast) tissue.

"Although there are many causes for lumps in the mammary tissue, breast cancer is one of the most likely, and concerning causes. Phyllis was not spayed, which is the likely cause for her developing mammary tumors," said veterinarian Dr. Janet Spence. "Phyllis was likely going to become another number, lost in the stagger statistic of 2.7 million animals that are euthanized in shelters each year."

Luckily for Phyllis, she was rescued from the shelter by a technician at one of the Lewiston Animal Hospital's sister hospitals. She persuaded Spence and her fellow Lewiston veterinarian, Dr. Lindsay Edwards, to donate the surgery and spaying Phyllis needed.

Testing revealed the lumps removed were non-cancerous, Edwards said, although some other growths are being closely watched in case more surgery is needed.

Phyllis already has been in several scenes shot for the movie at different locations and still has a few more shots penciled into her schedule through early November.

Now all she needs is a new home.

She has captured hearts of everyone at the animal hospital who love the way the big-eyed, tiny creature happily greets them when they arrive in the morning. All agree there will likely be tears when Phyllis leaves, but since they already have several pets of their own, they can't take her themselves.

Spence has taken her for a home visit and discovered Phyllis didn't have any accidents in the house and likes to snuggle on the couch.

Phyllis so loved the plush beds kept in the back of the hospital for the vet's own dogs, that she's now got her own. Plus, Edwards said, pointing to the pink sweater Phyllis was wearing for her interview, she already has the start of a wardrobe.

All are hoping Phyllis will be adopted by someone local so they can see her again, but really there is only one requirement.

She said the Lewiston hospital on Portage Road has been under new management for more than a year, and both she and the veterinarians are new there. Spence and Edwards also do emergency rotations at the Grand Island Small Animal Hospital.

•Watch the film announcement (link below) to learn more about Phyllis.