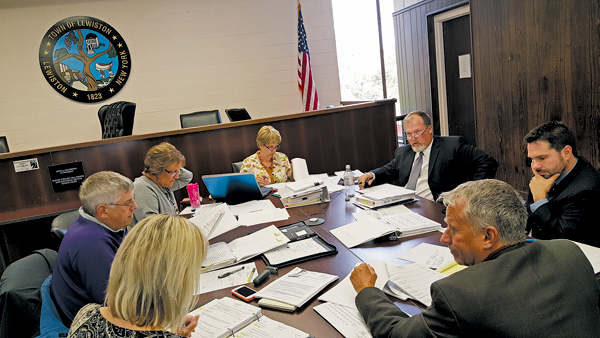 Town Board members review portions of the budget in detail Thursday at Town Hall. (Photo by Terry Duffy)

Lewiston Town Board delves into the budget

"I've tried to do the best I can in trying to figure this stuff out," Blazick said as she began going over the budget in greater detail with Supervisor Dennis Brochey and Town Board members.

"Revenues are where I really need help," Blazick said as she went on to review the sources line by line.

Starting with the A Fund, Blazick revealed projected revenues of $690,300 from Modern Disposal tipping fees - funds derived from Modern's overall business activity related to its Lewiston landfill and the company's expectations in the future. Blazick said the company sustained business declines in Buffalo and Canada, both of which have contributed to the reduced tipping fees.

Actual tipping fees collected thus far from Modern over two quarters amounted to $345,569, according to Blazick. This includes $100,000 in funds the town assigned to Artpark for 2015.

On a related item, Blazick said Modern's host agreement money paid to the town would be $500,000 for 2016. It's a set dollar amount each year per Lewiston's CHA with the company.

Blazick said CWM Chemical Service tipping fees budgeted for 2016 would be $50,000, a sharp decline from the $152,728.39 paid in CWM gross receipts taxes paid to the town for 2015. Blazick said CWM advised the town earlier that its air space capacity at the company's Balmer Road landfill was reaching its limit, naming that as the primary reason for the decline. "They have since back-peddled and said they didn't know where we got that information from."

Budgeted B Fund revenues discussed thus far include: $60,000 in anticipated casino revenues from the county from Seneca Niagara gaming operations; $40,000 from building permits; and $180,000 in mortgage tax receipts. Other revenues are still under review, pending discussions with department heads.

Moving to expenditures, the board heard first from Town Clerk Donna Garfinkel and the clerk's office $174,135 personnel services account. Blazick opened by noting the clerk's office is affected by union negotiations, so those clerical personnel costs were not calculated. She did note Garfinkel requested a $10,000 increase to her $48,672 salary, due to a number of additional duties she has taken on over the past year.

Garfinkel explained to the board that she took over the post from former Town Clerk Carol Brandon at a salary $12,000 lower than her predecessor. "I have since consolidated the department, have taken another sliver of another department," she said.

"The workload is a lot different," Garfinkel continued, adding the clerk's office, over the past year, assumed revenue collection procedures and a host of inputting tasks from other departments. "In what we have taken on ... it has helped to make things move a lot smoother" in Town Hall.

"Our department has taken on a lot," she added.

Following limited discussion, board members and Brochey were in agreement with Garfinkel. "Donna has done a great job," Councilmen Al Bax said. "I for one, do not have any objection, if it's in the budget. Those are invaluable services you provide."

Counting equipment contractual and personnel, the town clerk's line totaled $188,535. Board members went on to approve her salary increase request.

The $2.761 million town Highway Department budget line was the next to be examined.

Focusing on the revenue line, also $2.761 million, Blazick said that number reflected all expended appropriations. "This is a straight reimbursement. What we spend is what we get," Blazick said.

Throughout her discussion, Blazick echoed a similar explanation. Town revenues - the majority of which are based on New York Power Authority hydro money monetization from market trends and fund town expenditures - are way down.

Among the sources Blazick estimated a projected $38,500 in revenues to highway coming from energy utilities.

Moving to snow and ice removal, Blazick said she budgeted $245,000 in anticipated costs for 2016, based on a 10-year cost average estimate from discussions with Highway Superintendent Doug Janese. Those costs totaled $281,466 last winter, which was attributed to an unusually hard season.

Moving to a state aid big ticket item - CHIPs funding - Blazick budgeted it at $109,000, explaining that amount was based on this year's expenses and adding there was no guarantee on future monies coming from the state. "When we budget, we're estimating; we're filling in the line items."

Moving to expenditures, namely highway personnel, Blazick listed total salaries of $985,460 for 14 full-time and two open positions; snow/ice removal overtime costs of $85,614; $40,000 in seasonal fall/summer overtime costs; and a 3 percent salary increase for all employees, for a personnel total of $1.051 million. Saying she was budgeting for $1.036 million, or $20,000 less, for personnel, Blazick told the board and Janese, "We have to cut; it is a realistic figure."

Other highway expenses include $1.033 million for general repairs, including $250,000 allocated for paving; $250,00 in total improvements.

Blazick went on to say, "Overtime is a huge part of the budget at highway," adding that a greater focus has to be put on reducing seasonal overtime in the department.

Responding to a Janese question of poor management by the Highway Department as contributing to the town's financial troubles, Blazick said her concerns were based solely on the overall impact of highway's H-97 (infrastructure) account and overtime issues.

"The department needs to work on making better use of the time in the summer and fall and try to eliminate the overtime as much as possible, while still supplying services to the town," Blazick said.

She closed by saying the highway budget already is $100,000 lower than last year's and advised Janese the town's options at this point are for increased revenues or to cut down on expenses in all departments, including highway.

The board will be continuing its budget discussions with department heads at a 5:30 p.m. session, Tuesday, Oct. 20, at Town Hall. It is open to the public.