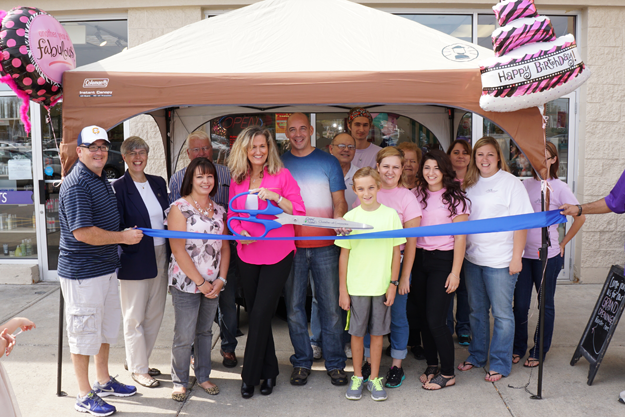 Cindy Inman, joined by her husband Jeff as well as friends, family, and business and government supporters, cut the ceremonial ribbon on Plumeria, her organic bath products store in the Tops plaza. Click for a larger image. (Photos by Larry Austin)

Last Saturday's ribbon-cutting in the Tops plaza signaled two things: Plumeria is open for business, and Cindy Inman has her house back for good.

It was just two years ago that Inman lost her job of 13 years and jokingly wondered to her husband Jeff how she would fund her "addiction" to LUSH, an organic luxury bath seller.

Inman is really doing that. It was as if a bath bomb of invention landed in the bathtub of opportunity and started to fizz. Inman was soon in her kitchen making her own homemade and all-natural soaps and products. Within a year she had transformed the idea into a successful direct sales company, then began selling in the Boulevard Mall and the Walden Galleria from kiosks over the holidays. Saturday, she cut the ribbon on her store in the same plaza as Tops Markets, on Grand Island Boulevard.

Inman attributes this kind of rocket-launch expansion to filling the unmet demand for healthy and organic cosmetic products.

"That is a huge growth," she said. "There is such a push for natural products now because people are getting educated, number one, and learning that the product that they're using on their skin is causing them to get sick."

Putting something on your skin goes into the bloodstream within 30 seconds, she said.

"So with that, you want as close to edible as you can possibly get for your skin, too," she said. 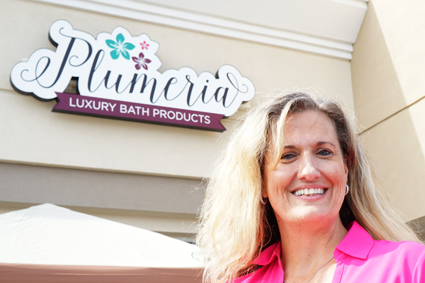 Inman gives credit to social media for spreading the word about her product, and to her "girls," the consultants who she said feel as strongly about the product as she does.

"I already cried with the girls in the back room," she said at the ribbon-cutting event, attended by friends, family, government officials, and members of the Grand Island Chamber of Commerce. "They're such an integral part of Plumeria. ... Their ideas, they're going out there with the passion that I have for the product."

Inman will employ three additional people in the approximately 1,500-square-foot space in the plaza, the core of the Island business district. She's already heard customers ask her to expand to other towns.

One of Inman's consultants, Tina Geiser, said Plumeria sells natural, organic "pioneer" products, not the modern soaps for which consumers reading ingredients on the packaging "need a chemistry degree to figure out what it is." She said Plumeria can barely keep the best-selling Plumeria magnesium cream, an essential mineral, on the shelves.

Inman said she chose the Tops plaza storefront "because it's the best location on the Island." It's a far cry from her first location, her kitchen and living room, which she quickly outgrew. She said her neighbor Mark Kowzan kindly provided her space next to his business, Marty's Towing, for eight months when her production line "overtook my whole house."

Soon she outgrew that space, as well, and when the plaza location opened up "it was absolutely perfect timing, perfect timing, and we jumped in over here in August," Inman said.

"I think it's great right in town center," Chamber of Commerce President Eric Fiebelkorn said of the location, adding that the business has "really nice product selection." Fiebelkorn was impressed at the ribbon-cutting by Plumeria's customer service.

"If you walk around and talk to everybody, (they're) super-friendly, focused on customer needs. They have a unique boutique service which feels a lot like the services that people having been asking us for around town," he said. "They'd like to have a little more boutique feel to a lot of the stores and shops that are opening up, and this fits right in there."

Fiebelkorn called the Tops plaza "the nucleus" of Island business.

"The plaza that would never be filled is full," Fiebelkorn said, explaining that some people weren't sure if Benderson Development would ever fill the plaza with business, but instead be satisfied with 70 percent occupancy.

"Grand Island Boulevard's challenging because there's mileage. We don't have a village, small like an East Aurora, where everything's packed into a mile. So our development's a little bit more challenging in finding the right space and fit for everything in a long stretch," Fiebelkorn said. 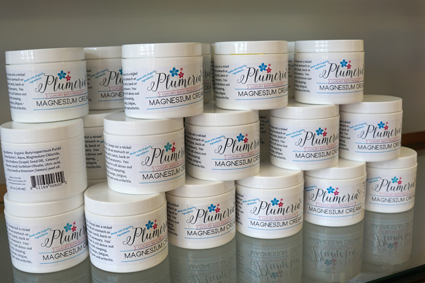