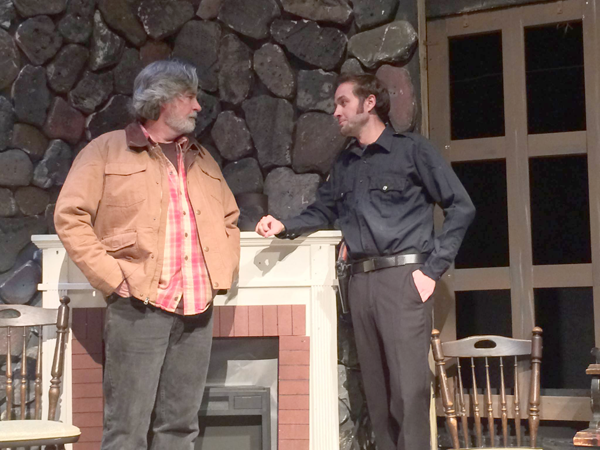 L. Don Swartz as Doc, left, speaks with Trey Wydysh as Junior during a rehearsal for "Murder in the Smoky Mountains" at the Ghostlight Theatre. (Contributed photo)

It's the perfect recipe for a mystery: A bunch of people who may or may not know each other as well as they think, thrown together in an unfamiliar area ... when things start going horribly wrong.

It's a familiar pattern, and a classic one, and it's about to confront the characters in "Murder in the Smoky Mountains," which opens Oct. 8 at the Ghostlight Theatre in North Tonawanda. The original play was written by L. Don Swartz

"It has comic elements, but it's a serious murder mystery, and it's set in the Smoky Mountains in Tennessee," Swartz said.

A small group from a Buffalo business visits the area for a work retreat, he said. "They go to a bed and breakfast ... and then things start going wrong immediately. The local deputy, it's his first day on the job, and the sheriff is on vacation.

"He quickly collects his wits and then the challenge is, can he figure out what's going on with this company and with the murders?"

The deputy in question is Junior, played by Trey Wydysh of North Tonawanda. Swartz described the character as "a little rough around the edges, but ... really very, very bright."

"He's not a hayseed, he's not a redneck. It's just low expectations," Swartz said. "People think the murderer is going to get away with it, that there's no way this kid can do this. I hope the audience begins to root for him as he begins to piece it together.

"To me, that's the fun. It was so important to get Junior right."

Wydysh previously performed in a number of Ghostlight roles, including those in "Treasure Island," "Hound of the Baskervilles" and as George Bailey in "It's a Wonderful Life." Swartz compared Wydysh's performance as Bailey to his performance as Junior ... and to his Wydysh's own personality, relating how the actor was once late to a rehearsal because he stopped to see if he could help at an automobile accident on the way there.

"That's such a Junior thing to do. ... it's who he is," Swartz said. "And to take that integrity and put him in over his head ... it results in comedy and hopefully, the audience roots for him. I was so delighted when (Wydysh) walked in to audition."

Wydysh, who said he's appeared in Ghostlight shows since he was about 16, is enjoying the role.

"Don writes them really well," he said. "He's a good observer of people. He likes characters he can really sink his teeth into and know and learn about. It's fun doing that.

"I always like being in Don's originals or the adaptations he write(s), when I have a chance to. It's a great show; it's funny but it's a little spooky in parts. You can tell Don loves his murder mysteries. He's well informed on the genre, so he knows how to write a good murder mystery and hit the points he needs to hit, make sure everything is logical and clear."

The rest of the cast includes Debby Swartz as Molly, the widowed owner of the B&B where the group is staying; Carl Tamburlin as Mr. Hawthorne; Katherine Quattrini as Eve, the president of the company; Ronald Vossler as Brett; Gabrielle Wittcop as Rhonda; Megan Blarr as Lucy and Nathan Schuh as Albert; and Greg Blarr as Cordell. Swartz himself plays Doc, the town coroner and Junior's father.

Wydysh said it's a great cast with which to work.

"There are a few people I haven't had an opportunity to work with before," he said. "... It's a new challenge, finding your chemistry with each other."

"This is my way of putting it down on paper," he said. "We're not snobs, they're not rednecks. We're just people. In this play, they have to come together if they want to survive.

This is the first show of Ghostlight's 2015-16 season. The rest of the season will feature:

•"All Through The Night" (December) - This year will mark the 25th year of the original show by Swartz, a local favorite that has also been produced around the world. The company presents it in a Christmastime rotation with "A Christmas Carol" and "It's a Wonderful Life."

•"Tom Sawyer" (February) - The adaptation (also by Swartz) will take a slightly different tack on the Mark Twain classic, with less emphasis on the more lighthearted scenes and more on what happens when Tom and his friend Huckleberry Finn witness a murder and what they decide to do about it.

"It's more like a 'Criminal Minds' episode. Once the boys witness the crime, all bets are off," Swartz said. "It's just wonderfully dark, and the kids outwit the bad guy that even the adults can't deal with."

The familiar scenes, such as the whitewashing of the fence, will be there, Swartz said, but the focus is on the coming-of-age story.

"I'm looking forward to presenting it that way," he said. "From that moment, their childhood's over. They can't go back. They have to take responsibility. And of course, they do."

•"Lottie & Bernice: Living Large" (May) — The world premiere comedy (again, by Swartz) will feature the sixth appearance of the eponymous Lottie and Bernice, audience favorites, as they take on new situations in their own inimitable style.

The grumpy old ladies first appeared in 2001's "Danse Macabre" - and people promptly began asking for their return. This show, Swartz said, is a "comic strip" style, rather like a variety show.

•"The Music Man" (August) - The season will end, as it usually does, on a musical note. Swartz described it as a favorite for a lot of people.

For more information on Ghostlight Theatre, visit www.starrynighttheatre.com or call 716-743-114.

Tickets are $14 general admission and $12 for veterans, students and seniors. Visit www.starrynighttheatre.com or call 716-743-114 for tickets or more information. 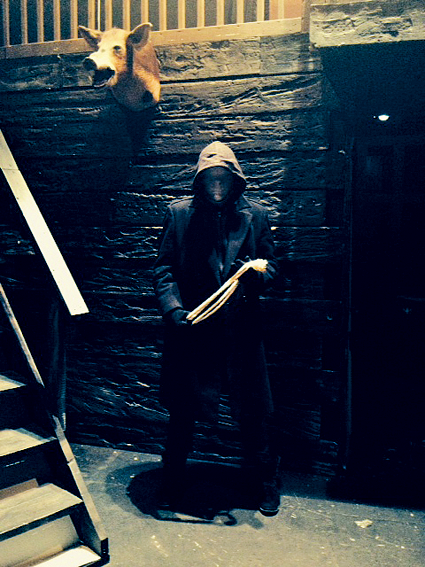 A masked stranger terrorizes guests at a remote bed and breakfast in
the Great Smoky Mountains in "Murder in the Smoky Mountains," presented starting Oct. 8 at North Tonawanda's Ghostlight Theatre. (Contributed photo)