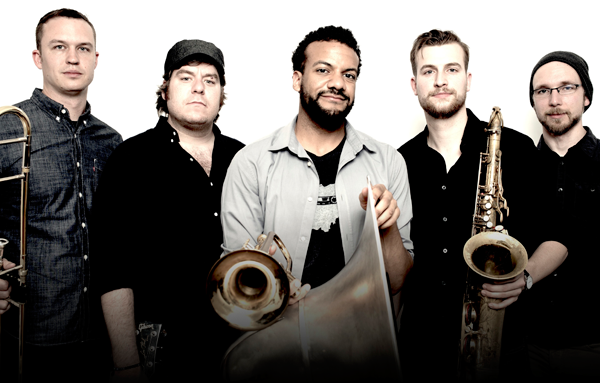 An interview with Dan White of The Huntertones

Founded out of Columbus, Ohio, The Huntertones are high-energy, horn-driven group of talented musicians now based out of Brooklyn. Their compositions are a unique blend of genres and grab inspiration from everything - including beatboxing, hip-hop, jazz and funk. The Huntertones blend it beautifully in their music. Their skill, along with their energy, make them a fun band to experience, and I would recommend catching their tour-opening show on Sept. 23 at Ironworks in Buffalo.

I had the opportunity to talk with The Huntertones' saxophone player, Dan White, to discuss the band's unique sound and approach toward music.

The first question I have for you is, for someone who hasn't really heard of you guys, what would you say The Huntertones are like?

Dan White: That's usually the most difficult question for us to answer. There are several groups that are starting to come out, instrumental groups, but us, we are more like four or five genres. Jazz, funk, fusion, rock, hip-hop. All of these things influence what we're writing, and our shows. But at the same time when you lead off with jazz, there's a lot of baggage with that word. Especially for younger people. The first being that it is sort of low-energy, and a seated audience. And that is definitely not the case for the majority of the shows we are playing. One of the main things we do with the band is (up) the energy level. It is very big thing for us. It's six guys up there sort of going for it for 90 minutes. So, usually our favorite thing that we hear from people at our shows who haven't seen us before is "Wow, I didn't expect any of that."

You mentioned that you were an instrumental group, and it's great to hear music that doesn't have a vocal track, because you really get to focus on the instrumentation. Does that make you have to step up your game, musically speaking, because musical imperfections aren't masked by a vocal track?

White:Yeah. Yeah, I would actually say very much so. I feel like we have an uphill battle because of that. Listeners nowadays, if you listen to the radio, almost all of it is completely vocal, and non-instrumental music. We feel the music should reflect that, and, y'know, because of that we aren't taking 10-minute solos. The pacing of the show is much different when engaging the audience with our music. We look at it as an opportunity to showcase the songs, like a songwriter does. But obviously in a pop song, where a songwriter would go to a second verse, were it is almost entirely the same thing as the first verse but with different lyrics, we would do something differently. Y'know, so that the listener is engaged and it is something interesting.

In regard to the jazz aspect of your music: Jazz is a very technical genre to work with, especially jazz drumming. That technicality, along with really having to step up your game since you are an instrumental group, might make it more difficult. So, what got you to hone in on that genre as opposed to your other influences?

White:Well, I think a big reason is the instruments that we play, and a lot of our heroes in these instruments are jazz musicians. Guys like Miles Davis, or Clifford Brown, or J.J. Jackson, or Flat Hanson, those guys, y'know, being trumpet players, or trombone players. For me, guys like John Coltrane or Charlie Parker. As we grew up, we studied their music, because we wanted to be better at our instruments, not because we wanted to study just jazz music. That's a part of it. If you have a saxophone or a trombone or any of these instruments, usually you are heavily influenced by a jazz musician. Plus, all of us like to improvise. The master improvisers, many of them come from the jazz tradition. So we are always listening to that, but we are also influenced by many other elements of music.

The best all-encompassing word to describe us would be jazz, but we also see the link between improvisation and composition. Improvisation being able to come up with things on the spot, in the moment. And then composition being very much the same, but the only thing being different is the span of time, which you can think about it. In composition, you can take time to work out other ideas and, y'know, kind of judge what you're playing. While improvisation you never want to be judging - you want to be feeling and going; just playing. A lot of times, the combination of the two in front of a live audience creates the unexpected and always changeable. There are these moments of openness in our music where it is a solo, where you can play whatever you want, and a lot of the times what ends up happening is this energy exponentially increases, because there isn't a set way we play our shows. There's room for us to improvise.

With that improvisation, when you wrote your album, "The Huntertones EP," did that come into play? Was it a huge tool that you used in the writing process?

White:Absolutely. There is improvisation on every track of that. That's the way that everybody composes in the band. We don't hold back in how complicated we want something to sound, in order to make it interesting and different. But at the same time, the goal for our band is to learn the music so that we can start improvising. Once we know it, and have it memorized, then the real music starts being made, and we're able to say some things to the listeners and to the audience. So, the improvisation aspect of our music is important, because that's a variable in what we play. There's always risk involved, but we're all such good friends, and we're all trying to help each other and make something happen, and that's kind of what makes it exciting. There's that unknown.

On a completely different aspect of the band work, for you guys to get shows, is the process similar to any other local band?

White:Honestly, I think there are plenty of good venues that believe in good music, and bad music (laughs), and only book the former. And when we present our music, we almost always present it the same way. I think one thing that we have done to help our chances is put a heavy emphasis on the visual aspect of our recording. Not only do we record in the studio, but we also record for YouTube, and for Instagram and for all these other social media outlets, making our brand a little bit more accessible to younger audiences. I wouldn't say that it is a different hustle from other bands.

What about you personally? Do you work on any projects besides The Huntertones? Do you have any aspirations outside of the band as well, personally?

White:Yeah, I mean everybody in the band works on other side projects. That's a result of living in New York, and doing that stuff is very busy. I am working on a trio project where it is just saxophone, bass, and drums. And then we also play as horn sections in plenty of other bands around town. With this band we also do stuff where we are teaching. We are sharing stuff with the younger generation. For this upcoming tour, we are actually going to be giving five or six master classes throughout the two weeks. Which is pretty cool.

And, you mentioned, musically, what your influences were, but what about non-musically? Do you have any influences that affect your art that aren't musically based?

White:Interesting. Yes, I mean, honestly, I think that everything influences what were doing as composers and artists. So that's my very general answer. Since we are trying to reflect that, I think that everything in our general lives effects each other. Everybody in the band, we are pretty close; we've been together for about five years; so if anything happens to one of us, it's not like we step on the stage together and that's it. Not like we step off stage and we all go to our separate hotel rooms. We are all very close, so I would say everything affects our music. And we are trying to be honest musicians, and I think part of that responsibility is being open to playing what you are feeling, and writing what you're feeling. And reflecting on that.

What's next for you guys, besides the album and the tour?

White:We are doing this tour. I actually grew up just north of Buffalo, and I am really looking forward to heading back and seeing some family. We are doing those shows, and then we are actually doing a live album in Ohio when we play two dates in Columbus, which is where everybody in the band met. So we are playing in a nice little listening room in Columbus, and doing a two-night recording session there. Then we are releasing the new album in November.

In the beginning of 2016, we are actually going to be travelling to Africa as part of an American music abroad program for the United States State Department. So, basically, the band will be acting as ambassadors for about a month-long tour, and performing for people who don't have access to Western culture and Western music. A lot of the music we play is rooted in funk, blues, jazz, which is American-based. We are kind of representing that in that tour.

For the live album, I know you guys have the venue picked out, would recording live affect the recording quality?

White:Well, we pretty much record live. We are pretty used to it. One of the main issues in the studio is that it is kind of like a sterile environment. We're in this room together, but in terms of sources of inspiration, it is sort of lacking. So, y'know, having the audience there in that sort of environment, we are a lot more comfortable with that. I think that we are really looking forward to doing that. And also, the band has been together for about five years. We actually changed our name about a year ago, and there is a lot of material under our former name, and we are actually going to be playing some material from those albums. It will be a kind of nice bridge for that music for the band.

We are super stoked because you definitely don't want to come home from a concert, seeing a band, and putting in the CD and it sounding nothing like what that concert was. The best way to ensure that, to actually record our energy and sound live, is to do it.

The Huntertones new self-titled EP will be released on Nov. 20. Check it out HERE. Be sure to check their site for updates on tour information, as well as new releases. Since they are very "social media-savvy," you can follow updates on their Facebook and Instagram accounts, as well.

The band's tour kicks off Sept. 23, and will go until Oct. 17. Be sure to find the closest show, and get to it. It will be well worth it.