•Taken from the Sept. 18 Island Dispatch

Both the Republican and Democratic party heads were pleased with last Thursday's results in party primaries.

After five head-to-head primaries for town justice, incumbent Sybil Kennedy will hold the Democrat, Independence and Green party lines on the November ballot, while challenger Mark Nemeth will have the Republican and Conservative lines. Mike Madigan and Gary Roesch won the GOP lines in the race for two Town Council seats. Beverly Kinney and Madigan gained the Independence Party lines for council.

"We're happy about the results of the primary," said GI Democratic Party chairman Jim Sharpe. "Sybil won three out of the five races and Beverly Kinney has solidly won the Independence Party race by 2-to-1 over her opponents."

Dean Morakis, chairman of the GI GOP committee, said he was happy overall with the outcome of the primaries, where challenger Madigan was the top vote-getter in council primaries thanks to 650 votes in the GOP primary, easily outdistancing Roesch and Maloney. The top two vote-getters will have the line in November.

"Mike Madigan solidly got the Republican, Conservative and Independence line," Morakis said in races for the Grand Island Town Council. Madigan interviewed for the vacant council position four years ago before he ran for Congress two years ago, Morakis noted.

Roesch, a Conservative Party member, was endorsed by the GOP and beat Republican Maloney, who has passed petitions to get on the November ballot on a his own minor party line. His petitions have been challenged, Morakis said, and are under review by the county Board of Elections.

"I think Grand Island's Independence Party people have basically recognized the fact that it's not an open process or a fair process," Sharpe said of the state leadership decision.

Sharpe said the primary results portend good things for the race in the general election in November.

"We feel we have a competitive race coming up," Sharpe said. He said he thinks Kennedy has an advantage with non-affiliated voters, or blanks.

"But I also believe that her longevity as the sitting judge will serve her due to the fact she's been a good judge for the past 16 year," Sharpe said.

Kennedy, a Republican, has the Democratic endorsement in hand. Nemeth won the Republican line head to head against Kennedy and edged her in the Conservative Party primary by three votes, 59-56.

The GOP committee opted for the town's prosecutor over the sitting judge when it made its endorsements. Morakis said from his point of view Kennedy interviewed "very poorly" when she sought the GOP endorsement, and Nemeth had "already been waiting for eight years on the sidelines."

Only affiliated voters could vote in the primary, so blanks will have a big say in the winners of the general election. Numbering 2,800, blanks are the third-largest voting block on the Island, Morakis said, though he pointed out they don't typically vote at the rate of affiliated voters. 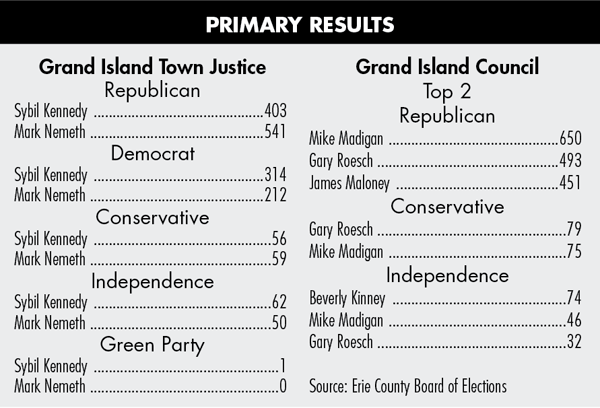