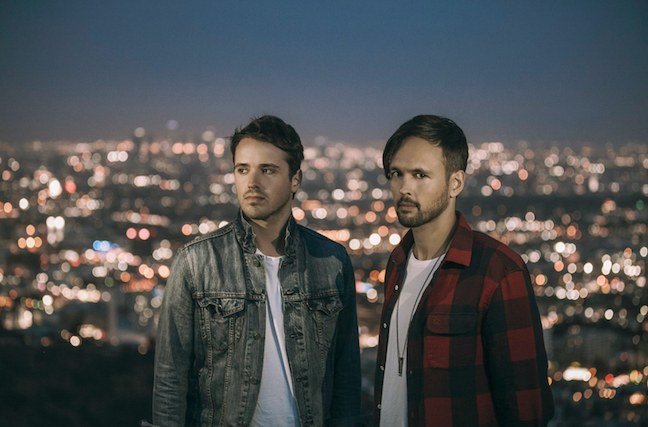 Let's say you're in a band.

And you want to make music for the masses.

What do you need to reach that goal?

When teaming with his brother, Michael, to make the band's sophomore release, "Inanimate Objects," Keith decided the best course of action was to be indefinable, independent and imprecise.

"On the first album that we released (the critically acclaimed Web sensation 'When It Was Now'), I would always drive myself crazy being a perfectionist - just tweaking little things, you know?" he said in a recent phone interview.

While the end result proved to be a success, particularly with the hit single "Trojans," the journey was filled with "lots of pressure," Keith said.

About the time the Australian brothers were ready to return to the recording studio, "I had a buddy of mine. ... He wanted to know more about the band," Keith said.

"I played him 'Trojans,' and I remember listening to it thinking there's a couple of things I would've changed had I been doing it right now," he said. "And that produced an epiphany of how perfectionism is such a waste of time and how to just trust your gut at the time, because there really is no ... perfection doesn't exist."

"When I listen to 'Trojans' and those songs that we did on the first album, what I still get is that genuine emotion there," Keith said. "There's songs that were written that successfully capture an emotion. That is what, I think, stays timeless."

Atlas Genius was inspired by Tom Petty, The Police and Tears For Fears in making "Inanimate Objects."

"It was really not to try and make it one specific 'genre,' " Keith said. "We didn't want it to just be indie rock or indie pop - you know, the tags that they put on bands now. It's just stuff like we love."

"What we did was, there would be a certain vibe to a song, and it would remind us of stuff that we grew up thinking," he added.

"This one, I feel, is a bit more vague, which, for us, artistically, is very satisfying," Keith said. "We tried to do it in a way that we weren't all over the map, but it stayed true to the emotion of what each song was."

Fans and critics have responded favorably.

"The reaction's been great for us," Keith said.

"The biggest danger, for music, is that it just goes by unheard, you know," Keith said. "It's very hard to get heard, because there's just so much music. I'm really proud of this album. My thing now is just to make sure people hear it, because we think it's something special."

While Atlas Genius is all the rage right now, Keith said there's no telling how long fame will last. And that, he said, is OK. Part of the message on "Inanimate Objects" is not overanalyzing, overthinking or trying to map out the future.

"That's what (lead single) 'Molecules' is really about, actually: Just focusing on the moment," Keith said.

And while some bands would measure success by TV appearances or magazine covers, "I always appreciate that we're touring," Keith said.

Atlas Genius will perform Sunday at The Waiting Room in Buffalo.

"Our live show is feeling really great at the moment," Keith said. "We've been touring this new album for about three months, doing a bunch of festivals warming up into the summer. What we tried to do is stay true to the recorded versions, but also have moments where it allows us to sort of reinvent the song each night."

"We try to keep the energy really high," he said.

"What we're doing is the best job in the world," Keith explained.

Click HERE to find out more about Atlas Genius or to order "Inanimate Objects."

Buffalo fans, click HERE for ticket information. It's a 6 p.m. show with Mainland serving as support.