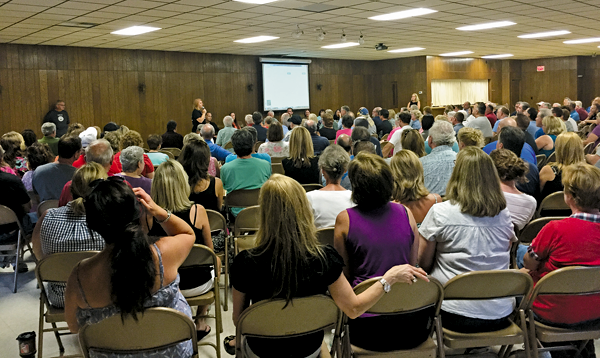 Many residents of Pendleton and Wheatfield attended a public meeting at Wendelville Fire Hall on a proposed National Fuel gas compressor station. (Photo by Mike Pidanick)

Health, noise, wildlife issues and more have been major concerns for Pendleton residents about a 22,000-horsepower gas compressor station that National Fuel is looking to build in the town, and close to the Wheatfield border. That has a lot of people from both communities furious and looking to fight to send National Fuel's idea far away.

Residents of Pendleton, Wheatfield and other surrounding communities packed the Wendelville Firehall on Sept. 2 to voice their displeasure of the idea.

"I'm sorry. My life, my property, my friends ... I think more of them than profits for National Fuel," said Paula Hargreaves, a member of the Pendleton Action Committee. "They don't need it anywhere in Niagara County or New York state."

National Fuel has acquired an option to buy 20 acres of land on Killian Road from the Tonawanda Sportsmen's Club and that is expected to be the location for the compressor for a pipeline project that would pump gas from Pennsylvania into Canada.

The proposed plant would deliver natural gas from Marcellus shale hydrofracking operations from Western Pennsylvania into parts of Canada. That has residents of multiple towns concerned about health, noise and other risks for neighboring residents.

"As we've always maintained that we want National Fuel to use the do-nothing alternative," said Kim Lemieux of the Pendleton Action Committee, "and to really move into another location that is suited for heavy industry - no zoning for residential; no zoning for commercial, light industrial does not belong in our town."

Wheatfield was also represented at the meeting, by Councilman Larry Helwig, who has taken a lead role on the Town of Wheatfield Board on this issue. A meeting attendee asked about the site that would house a hydrator and if the land deal had already been done.

"The first choice they had was south of the Endicott Corporate Industrial Park but they had to relocate that because of the 30-foot-high towers," Helwig explained. "We're trying to find out where they're going and every time we try to find out, they keep changing their maps. The land on Liberty Drive is owned by Forest City, I believe. They probably have the option to buy - there's a lot of vacant land up there.

There is still a process that National Fuel would need to go through before construction can begin, Pendleton Town Supervisor James A. Riester said. That will start with a sketch plan that would have to be presented to the zoning board.

A note on the Tonawanda Sportmen's Club website shares the following statement: "Tonawandas Sportsmen's Club and its Board of Directors - as being a part of Pendleton, share the concerns of the rest of its community. We have gone to the best extent possible to perform our due diligence before making this decision including several meetings with National Fuel and a tour of a similar station. Throughout the meetings, it became clear that one way or another due to zoning and the location of their existing pipeline, this compressor was going to be built on one of two sites on Killian Road.

"Once the board knew that to be clear, we felt the best thing we could do for the community was put as many restrictions on as many of the items that the community objected to as we could. We did that to the best of our ability."