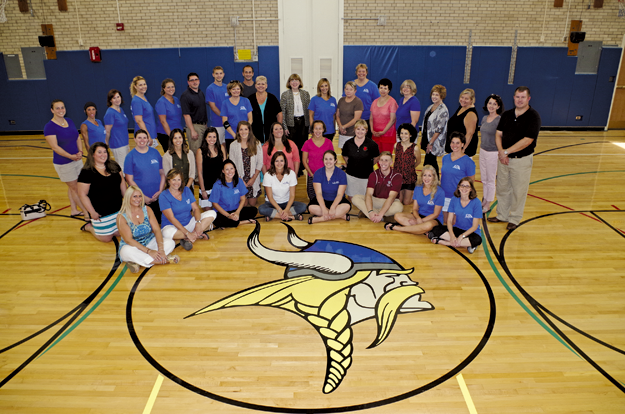 The Kaegebein Elementary School faculty and staff said "Welcome Back" to students and families this week and said they're looking forward to the 2015-16 school year. The school will hold an open house Thursday, Sept. 17. (Photo by Larry Austin)

Welcome to your new school: Kaegebein Elementary updates put staff 'over the moon'

•Taken from the Sept. 4 Island Dispatch

When Principal Mary Haggerty took the helm of Kaegebein Elementary School, she found one room with a hole large enough that she could put her fist through it, steel framework was visible.

How things have changed as the 2015-16 school year begins. Every single part of the building has been touched by the $50 million capital project, Haggerty said, so much so that when the school holds its annual open house Sept. 17, it will be billed as the open house and grand reopening.

Haggerty said Monday that everyone at Kaegebein was "over the moon" about the capital project work. She praised the stakeholders for coming together for what she called a "wonderful renovation," including the community, the district, Campus Construction Management, and Cannon Design architects.

"For me personally, I can't wait to see the students' faces because I think they're going to be so excited to see their new school and to see all the renovations and to know that their community cares about their school and cares about them and wants them to live and grow in such a wonderful new space," Haggerty said. "I think it's going to be great."

Haggerty proudly gave a tour Monday to show the school's updates. Though it may not look like it from the outside, the capital project has transformed her school building. Among the updates:

•Every classroom has new countertops and cabinets in the rooms, and electrical updates have allowed an increased usage of the latest technology. 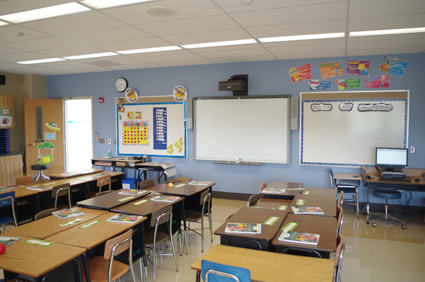 Casey Steck's fifth-grade class enjoys its first day of school at Kaegebein Elementary in one of two new classrooms in the schools new wing. (Photo by Larry Austin)

•The renovated main office has two conference rooms, "which we never had before," Haggerty said. Private meetings were held in either the cafeteria or the library.

•The health office has tripled in size to accommodate more children and has four beds, two exam rooms, a waiting area and a dispensary. A private office allows school nurse AnnMarie Stewart to hold private health conversations. Previously, she had to wait until the end of the school day when the children were gone to make phone calls on health matters.

•The library is renovated and adjoins a newly remodeled and expanded computer lab with 28 desktop computers, enough for children in each classroom.

•The gymnasium has a refinished floor, more light, new backboards and padding on the walls, and extra square footage with the removal of the old bleachers and the "60-year-old dust underneath. It was pretty impressive," Haggerty said.

Assistant Superintendent Robert McDow noted at Monday's joint school board meeting with the Grand Island Town Board that the Kaegebein gymnasium is at last on par with the other gyms in the district.

•A relocated and larger instrumental music room in what was Cafeteria 2, with permanent rehearsal space that wasn't previously available.

•New lighting and sound system in the auditorium. "When we have PJs and Popcorn in here, it's like you're in a real theater, because the screen is that good," Haggerty said.

•A new bathroom immediately off the cafeteria so students can stay within the confines of the room.

"We are ADA-compliant now," Haggerty said. "When I first got here, that was not the case."

All the aforementioned updates occur within the footprint of the school, Haggerty said. The only additional square footage is the new wing, called, appropriately, the New Wing, which completes a rectangle off two other wings and creates a new courtyard.

"Every year, the fifth grade will add something to the courtyard," Haggerty said. Each grade level will accent their new building as time goes by.

Haggerty also credited the work of the buildings and grounds department, led at Kaegebein by head custodian Michael DeMartin, in getting the school ready for opening day in the midst of the capital project.

"Custodial Appreciation is going to be a whole week this year, not just a day," Haggerty said.

Teacher Casey Steck will teach in one of the two new classrooms in the new wing. She previously taught for four years at Kaegebein in Room 45 in the 4-5 Wing.

One of the new classrooms has a handicapped-accessible bathroom.

"Oh, my God, I love it. Everything's so new. Tons of cabinet space for storage, and it's just bright and cheery," Steck said. "I love the windows and to look out on the field."

The windows are Grand Island large.

"I have a gorgeous view," she said as she looked out the window on the area that will see a new playground when it's built in a couple weeks."

"But I've got beautiful blinds so that if there's kids on the playground and I need to block them out, I can," Steck said.

"It's just peaceful," she said.

Steck was ready to welcome 19 students Wednesday on the first day of school. She learned in June she was one of the lucky ones who would work in the new wing. She just laughed when asked if the other teachers are jealous.

In comparison to the old room, she will have at least double the cabinet space, making for less clutter and having "everything tucked away." She has one SMART Board and two whiteboards with another whiteboard on the way to allow for more small-group learning.

"It's a very open, spacious kind of room," Steck said.

Last year, she taught a student who was deaf.

"But the nice thing about that is everybody benefits from it. It's not just those kids that need it, but everybody gets it," Steck said. "It's kind of hard to miss what's being verbalized."

Steck will teach in what is called a blended classroom, with some pupils having higher needs and others for whom English is not their primary language.

"I've got quite a diverse group coming in. I'm looking forward to it," Steck said.

Down the hall in the new wing, Marisa Valentine has a self-contained classroom for students with special needs in grades 2 through 5 who have individualized instruction programs. She has eight students this year in grades 2 and 4.

In her classroom, less is more so as to prevent distractions. Blue fabric on the ceiling tones down the fluorescent lighting.

Few classrooms at Sidway where Valentine taught last year had SMART Boards, but Valentine has her own, to the great benefit of her students.

"So this is exciting to be able to have my own, and they do work really well with this population in particular, because anything visual is wonderful for them, so the more that they can see and manipulate on their own, the better," Valentine said. "It really helps them to learn better."

It's an example of a direct benefit to learning from the capital project.

"It they're visual or hands-on learners, a SMART Board is something that's perfect for them," Valentine said.

"Even when I went to school, everybody had to fit in one box and it didn't matter if your needs were met or not. They just kept plowing through and the teacher just had one agenda and he or she followed through with that agenda, and if the kids got it, fine. If not, it was almost fine, too, and they just kept going," she said.

"It's more individualized," Valentine said of the education. "It gives the kids the opportunity to visually learn, to be hands-on learners, and it allows us the opportunity to be able to stop and say, 'No, you didn't get it. We're going to wait a minute and help you to learn it better.' We're trying to make our program fit the students, rather than have the students fit into one particular program,"

"If you're more comfortable in your environment, you're going to be more open to learning," Steck said, adding distractions and worries take away from the child's focus. "So having a brand new room gives them that space, and that comfort level, that they know they're in a good place."

Steck said Kaegebein staff eagerly awaited the reaction of the students on Wednesday. Valentine said the students would love their updated school.

Haggerty said research literature indicates that, when students see their school is a clean, safe, and an exciting place to be, there is a direct correlation with greater student achievement. She said the theory is: If you care enough to make my school wonderful, then it means you care enough about me and how I do and the kind of achievement I do, which I can rise.

"So we're looking forward to a great year in all respects," Haggerty said.