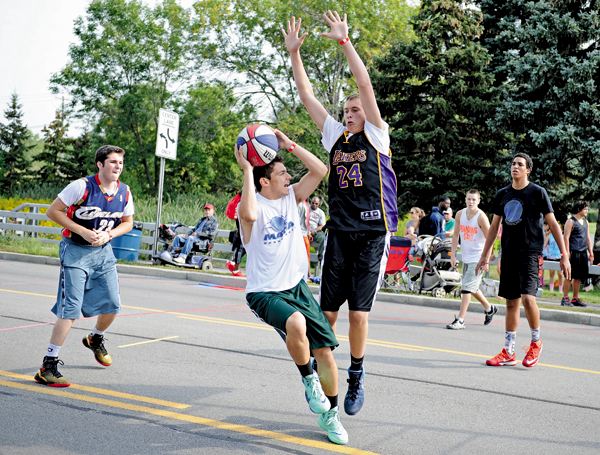 Gus Macker all about hoops

•Taken from the Sept. 4 Island Dispatch

When all was said and done, the Gus Macker 3-on-3 Tournament turned out just as event organizer Corey McGowan planned.

"Essentially, it's exactly what I told them what it would be. It's basketball," McGowan said.

The two-day event Aug. 29 and 30 on Grand Island Boulevard that was the subject of a contentious public hearing went off without the major incidents opponents feared would happen.

"From start to finish, everyone that's come through the tournament's been nice, polite, happy to be here," McGowan said, describing the event as "just people, families, adults, kids just having a good time."

Things were quiet at the command center and hospitality tent. McGowan reported no arrests Saturday. Final registration ended up at 282 teams in 23 divisions, with 21 courts on the boulevard, and two courts for the top men's and women's teams in the Town Hall parking lot. At a maximum of four players per team, as many as 1,128 men and women, played. The tourney had a limit of 500 teams.

McGowan said the returning players who had played at previous Mackers in downtown Buffalo liked the Island location and its proximity to the Town Commons.

"Being on that asphalt, it's very hot, but being right here in the park in the trees, that's what I heard a lot of comments from guys that have played downtown versus here," McGowan said. "There's no escape, there's no shade anywhere downtown. So here, you had guys laying underneath the trees, hanging out in the park."

He described the crowd he saw as spectators - families and children - rooting on their friends and family members. Players on the courts ranged in age from as young as 6 and 7 on one end of the boulevard near Whitehaven Road up to the 55-year-old range on the other end near Baseline Road. 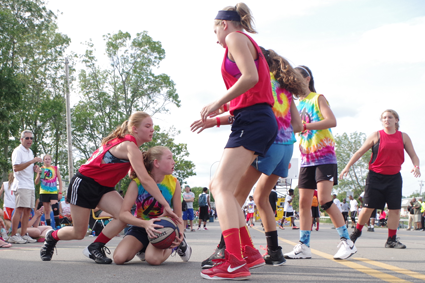 Grand Islander Chase Luthringer of The Avengers looks to pass from her knees as Kayla Callaghan of Full Court Hoops, a team from Buffalo, defends during play in the 13-14 age bracket of the Gus Macker 3-on-3 Tournament Saturday. (Photos by Larry Austin)

Cassidy Siebert, volunteer coordinator for the Gus Macker Tournament, said more than 100 students volunteered selling pop and water for DECA and keeping score at each court.

"I think it's great. It's a great atmosphere with all the food and it's bringing the community together, I feel," Siebert said of the Macker. "I think everyone is just enjoying their time."

Siebert, a senior at Grand Island High School, said the Macker was a highlight for her classmates, both the athletes and spectators.

"Oh, yeah, lots of kids are talking about it. We had a few teams participate, but I think we had a lot of students just come out and see what's going on down here," Siebert said.

"But people are having fun, man," McGowan said. "The best part about today was walking and running into somebody from Grand Island and talking to them about it. They don't know anybody playing necessarily, they're just here, they wanted to check it out, and they're just watching. So that was great to see."

McGowan hoped that those who sold parking places did well, and he said some businesses saw the Macker as an opportunity to profit. Some took the ball, ran with it and dunked it.

"McDonald's, the way they embraced it, that's pretty cool," he said, noting the restaurant decorated the dining room with a basketball theme and outside tethered a "blimp" to fly over the location on the boulevard. McGowan likened it to the North Star in that it helped visitors locate the tournament site from miles away.

Dan Stedman of TC's Island Bar & Grille allowed storage of the baskets on his property on the boulevard and drummed up business when he hired a band, The Gallow Walkers, to play music during the tournament.

"It was fun, it was just tough competition," said Luthringer after they lost their first two games, relegating them to the Toilet Bowl.

"It's a nice challenge though because we never usually play 3-on-3," Frosolone said.

Holding the Macker on Grand Island was a good thing, Mikayla Robinson said, not just for ballers.

"There's a lot of people that didn't even play in it that came to watch it," Robinson said.

The event included not just hoops, Siebert pointed out, but music and food, and she saw "lots of families who came out to support their kids." She didn't see any of the security risks opponents of the Grand Island hosting the Gus Macker had feared.

Next year's Gus Macker will take place the weekend of June 18, McGowan said. He hopes to draw more student athletes to play in the tourney while they are still in school.

Results of the competition and bracket winners are posted on www.macker.com. 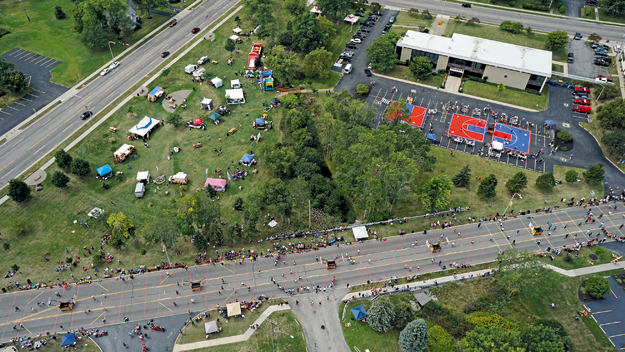 The Gus Macker 3-on-3 Tournament took place on Grand Island Boulevard from Whitehaven Road to Baseline Road Aug. 29 and 30, with three courts set up in the Grand Island Town Hall parking lot (upper right). Venders were also set up in the Town Commons. (Photo by K&D Action Photo and Aerial Imaging)